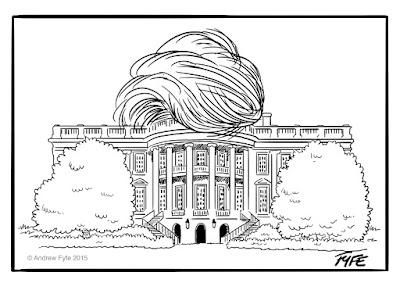 Today marks the inauguration of our 45th president, Donald J. Trump. Where I live, northern California, the weather has been dark and rainy, a suitable pall for a dismal day.

I’ve admitted it before: I was stunned by the election result. Trump lost the popular vote by a wide margin, 2.8 million, and yet his ability to game the electoral college wrested victory from a vastly more qualified (though politically tone-deaf) opponent. And now Donald Trump, a man who has boasted about sexually assaulting women, a man who flirts with racists and tyrants, a man who has selected a cabinet composed of people hell-bent on trashing the departments they will lead, this man is now President of the United States.

My tongue-twisted reply surely belied the confusion that many of us face. I was raised to associate the presidency with the hopes, wishes, and identity of our country, to support the office even if I could not praise the officer. Such a position always struck me as fundamentally democratic. My side plays fair, the other side plays fair, may the best person win.

But the best person did not win, not only because Donald Trump is so manifestly unfit for the office but more obviously because he didn’t win. He occupies the office but has not earned it. 2.8 million Americans prove that point. And while I admire the Constitution, have actually read, studied, and taught the document, I will not forget that its framers once marked slaves as being worth three-fifths of a person, that its framers enshrined an aristocracy with appointed senators, that its framers failed to ensure the voting rights of women. These mistakes, and other ones, needed to be rectified through the process of constitutional amendment. And the electoral college remains an error in need of remedy.

Until then, I find myself adrift, wondering how to respond to an election that is equal parts failure and farce. For all its faults, I still support the Constitution, and I continue to love my country. I remain a proud veteran, loyal citizen, and respectful participant in public life. But I will not again make the error of confusing Donald J. Trump with the office of the presidency. He is its occupier, not by popular vote, not by divine right, not by common sense.

Just this morning, before my bus began its climb over the hill from Scotts Valley to San Jose where I work, we visited a final stop. There in the rain stood two bedraggled protesters holding signs that read “Not my president” and “Save the ACA.” Under dark skies and stormy weather, they announced their positions, quietly and with dignity. They did not shout, and they may have wondered when our bus passed by, spraying rainwater from the tires, whether anyone noticed or cared. I noticed, and I took heart in their silent protest. I was reminded.

Donald J. Trump is a fraud and a failure. He is a liar and a con. He is undeserving of the office and unprepared for its obligations. He is not my president. Some folks voted for him, knowing his sins and somehow not caring. They will now watch what they have wrought, straining their eyes for some way to blame the opposition. They are hoping that we will be bullied, silenced, stunned into submission. Some will be, I suppose, fearful that they may lose their jobs, their privileges, their safety. But most of us who said no to Trumpism are ready to push back. Starting today.

“Mister Unelected President,” you are not my president, and I am proud to stand with those who will resist you from the beginning.

Image by Andrew Fyfe
Email ThisBlogThis!Share to TwitterShare to FacebookShare to Pinterest
Posted by highway163 at 9:10 AM

Well written, Andy. While I agree with most of what you said, I do believe Trump was elected fairly and that the electoral system is the right system, giving voice to those who otherwise would be "trumped" by the highly populous cities along our coasts. This country shouldn't just be for them (us) it should be for those that work hard in the central rural areas as well and Trump spoke to them. I believe we need to speak to them and their needs as well, not try to ignore them while pushing back on who they voted for. Yes, I believe they were tricked and this guy is not going to work for them like he promised, but while we are pushing back on the things we disagree with about Trump, we need to address those people's concerns so that next time they vote with us.

But, again I agree with most of what you said. Trump is unfit to be president. I believe he could do irreparable harm to this country if we do not stand up for what we believe is right and push back on what we believe is wrong. I don't think we should do as the Republicans did though- simply obstruct so that Trump fails at everything. If he, my some miracle, comes up with a plan that we like - say actually creating jobs to fix infrastructure - then we should support that and do it loudly so that those who get those jobs know we were on their side. We should be better than the response we saw in the Republicans.

Thank you for starting the dialogue and fixing our country!! :-)

Andy's passionate post makes us re-evaluate what we think and how we came to think those things. That's the goal of a perfect blog post. Well done. But I admit that I agree with Jenny more.

The president of the college where I work has announced that he is leaving at the end of this year. I admit I don't care much about the history of the person who will become our next president, but I care deeply about how that person will protect and defend and fix and love our college in the future.

As President Bartlet said often on The West Wing: What's next?