Jenny and I celebrated our twentieth anniversary over the weekend. We started with an early departure south on 101 toward San Luis Obispo and the world-famous Madonna Inn. After our arrival and a decent interval to freshen up a bit (our room was the Krazy Dazy), we sat down for a tasty meal at the Gold Rush Steak House. As ever, the room was practically pulsating with pink, everything sumptuous, decadent, and delightfully tacky. 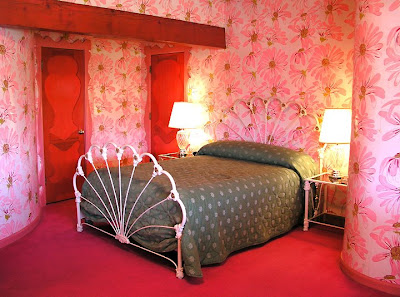 Following a complementary dessert of black forest cake, we changed into comfy clothes and headed to the Sunset Drive-in to catch a double-feature of Indiana Jones and Iron Man. We'd seen them both before, but Jenny and I love drive-ins, and we'd never visited this one before (I'll post pix tomorrow). The Sunset is a terrific drive-in: clean, friendly, and well-priced. We thought we'd stay for only one show, but we enjoyed both.

We slept in the next morning, saw Hillary Clinton's concession speech, and had a free breakfast at the Copper Café (thanks to being awakened by hotel construction before 8 a.m.). Jenny thought it'd be nice to check out the new pool, and - wow - is it impressive. The pool's got one of those swell overflow features and the area also includes a rocky waterfall that kicks up every hour. Sure, it's fake, but it's also pretty cool. We turned our deck chairs away from the sun and enjoyed the show. We dug our stay so much that we reserved a room next June for our 21st anniversary.

Our next stop was Oakland, thanks to free baseball tickets supplied by Jenny's boss at Seagate. I'd been wanting to see a baseball game for a while now, even though Jenny gets bored with most sporting events. So when her boss was handing out free "Diamond Level" tickets, Jenny kindly snagged a couple for us. 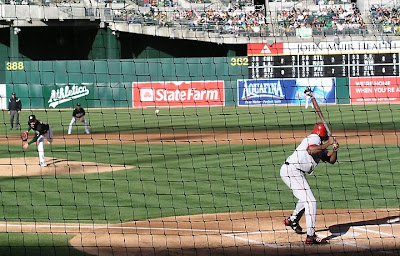 Oh, the Diamond Level. It's cool for so many reasons. First, it has its own parking area. Second, it's only accessible through the same hallway as the players. Third, it's got all-you-can-eat sausage, pizza, wings, and coupons for free beer - delivered to your seat. And best of all - it's right behind home plate. That's why individual tickets run 225 bucks - and they can only be bought in half- or full-season amounts.

We had an awesome time. About twenty players were kind enough to sign my ball, and even Jenny got excited by the game, especially the heart-breaking finale as the A's came that close to overtaking the Angels in the bottom of the ninth. Afterward, we got onto the field for a phenomenal fireworks show.

We closed out our evening with a quick visit to Forbidden Island, my favorite Bay Area tiki bar (other than Hula's, of course). The next day was dedicated to rest and much needed relaxation from a terrific celebration of twenty years. 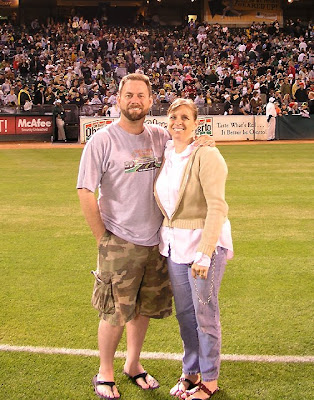 (Photos by Andrew and Jenny Wood - and a friend we met at the game)
Email ThisBlogThis!Share to TwitterShare to FacebookShare to Pinterest
Posted by highway163 at 10:48 AM