Weekend in SLO and Morro Bay

Even though we're both swamped with projects these days, Jenny and I spent much of this weekend visiting San Luis Obispo and nearby Morro Bay. It was a lovely way to mark the beginning of weather that finally feels like fall. Friday evening was dedicated to the drive, stopping only to enjoy some Central Texan BBQ in Castroville. We grabbed a quiet room at the Peach Tree Inn and called it an early night.

The next morning we woke late and headed off to Morro Bay. The skies were blue and the weather was brisk. Jenny and I enjoyed the chance to watch rock squirrels scamper near the water, even though we annoyed them a bit. The brave creatures would climb up our pant legs in search of treats before leaping away once they knew that we'd brought no food. 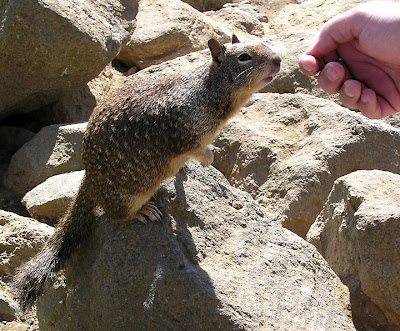 Jenny also loved watching the seagulls squawking nearby and the pelicans diving for fish in the bay. Naturally we walked as close to the Pacific as we could, even climbing over the breakers to get a good look at the ocean. The waves crashed against the other side, sending explosions of spray into the air that would burst over us in slow motion. 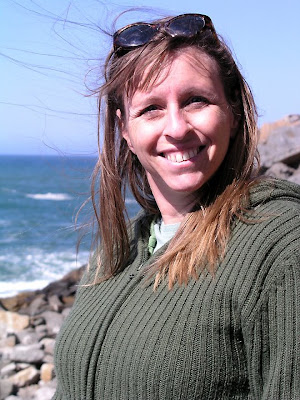 Jenny convinced me to scramble up the rocks with her, and we both felt safely distant enough from the pounding surf. Only when I began to descend did one particularly powerful wave pound nearby, sending a drenching splash my way. I had to remove my shirt for a while, placing it on the rocks to dry a bit, but I didn't mind a bit. 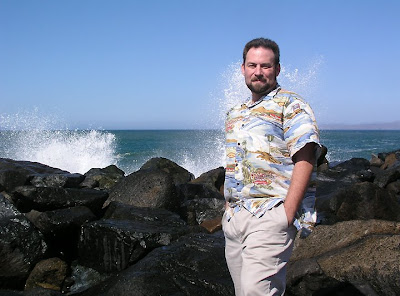 For lunch we got combination plates of fish, scallops, shrimp, and squid at Giovanni's, standing in line before finding seats next to barking sea lions. We got a real kick out of watching more than a dozen of the animals sunning themselves, taking swim breaks, and squabbling over prime placement on the dock below. The rest of the afternoon was dedicated to strolling the shops, buying some souvenirs, and enjoying a nap back at our motel. 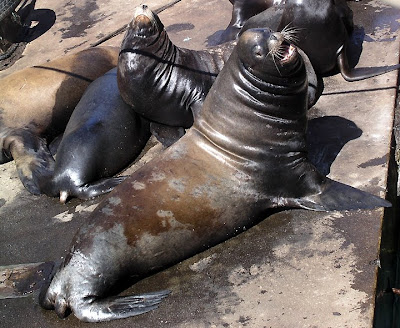 Our evening was spent in San Luis Obispo, enjoying ribs at Moe's and catching a movie at what must be the nicest Popcorn Palace on the central coast. Even though the show, Eagle Eye, was not too great a flick, I could also stare upward at the remarkable theater ceiling that glows in swirls of purple. It was a relaxing end to a mellow day. 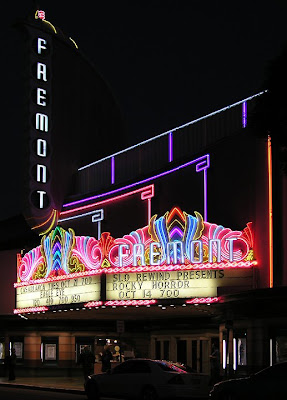 We returned home this morning, ensuring that Jenny could attend church in her local ward. I'm spending much of the afternoon reading page proofs and anticipating a busy week. At least I tackle these new challenges with happy memories of a terrific weekend.

(Photographs by Andy and Jenny Wood)
Email ThisBlogThis!Share to TwitterShare to FacebookShare to Pinterest
Posted by highway163 at 6:00 AM