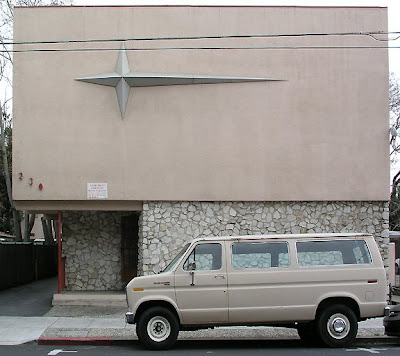 Updated! Scroll down for links to recent pix...

One of the delights of living in California is the proliferation of moderne architectural styles available to the casual historian.

The Golden State is, after all, home of the future - at least, it was.

So there's plenty of deco and streamlined styling to be photographed around here. And for postwar buffs, lots of international style too.

For a while now, I've been fascinated by an offshoot of the international style: Dingbat architecture. I thought I'd share an example and a little background.

Dingbat is built for a car-centric society, designed for the automotive gaze. It's also cheap and seemingly ubiquitous in the sunbelt.

The quintessential 50s or 60s-era dingbat is a "shoe box" building - say, an eight unit apartment built on narrow supports upon a parking area. The stucco facades are typically painted in a bland color, presenting large rectangular planes. Sometimes the doorway will be aligned with some faux-rock, suggesting a midcentury googie influence. But the building is generally pretty boring.

That's where the dingbat comes in. A "dingbat" is a typesetting ornament - kind of like a "special character" on your keyboard. It might be a star or a check mark or a pointing finger (remember those from nineteenth century broadsides?). On paper, they're pretty small. But on a dingbat building, they're huge, large enough to fill some of that empty space. Dingbat buildings therefore include ornaments such as diamonds or amoebas or - the moderne fantasy - atomic symbols.

Along with the the ornament, dingbat buildings often feature a name or a number, sometimes both, is some fancy script. The name provides some personality for the otherwise nondescript building, something arty like "Elysian Apts" or "Royal Arms." The number refers to street number. It's almost always a large set of digits, some set at jaunty angles. But sometimes the street number is spelled out. After all, everything is classier if it's spelled out, right?

Los Angeles is the world capital of dingbat architecture, and I hope to set up a shoot sometime in the next few months. In the meantime, I wait for blue skies and free time to investigate the dingbat buildings closer to home.

May 27, 2009 follow-up: Check out photos from my early-summer L.A. Dingbat Tour. I merely scratched the surface, but I managed to find some awesome examples.

• L.A. Dingbats - Part 1 (an afternoon visit to the land of Sputniks and Starbursts)

• My Favorite Dingbat (there may be a better one, but this is tops for me)

Fantastic Example! What is the Address?

As an Architect in LA, I have been smitten with the Dingbat since I moved here 20 years ago. Reyner Banham mentions them in his essential "Architecture of 4 Ecologies" as an example of a uniquely Southern California vernacular.

I'm working on a project to sell the idea of restoring and re-branding the Dingbat, so I will be sure to check back here for future posts.

Please do keep me posted on your project.

Also, can you recommend some specific addresses for must-see LA Dingbat sites?

I've lived in 2 dingbats... it's a coming of age thing here in L.A. - Also if you see the movie "The Slums of Beverly Hills" The family moves from one dingbat to the next...

you can find them all over the place from west L.A. to Hollywood - to the southbay... I love when something has some flair... some style - I'll need to check in on your blog to see your progress

Andrew--like Sharon said, dingbats are all over LA. But certain neighborhoods have higher concentrations than others.

Palms, I think, is one of the best neighborhoods for dingbats. You really just have to get in a car and drive around. You can get a feel for different neighborhoods, and find the dingbats. I'd also recommend parts of West LA and Brentwood. Sadly, a lot of dingbats are being torn down and replaced by oversized "Italianate" buildings which the owners no doubt think are more classy.

I've also taken a few pictures of local dingbats...a good number of them are geotagged, so you can get a feel for where I'm talking about:
http://www.flickr.com/photos/evang/tags/dingbat/

I love dingbats.
Its unfortunate that our current parking, lift, ADA requirements and arrogant architectural boards make them a thing of the past.

There are a couple of books about dingbats you might enjoy:

Awesome - thanks for the tips. I'll definitely check out those pics. I really appreciate the help!

The funny (?) thing is that they are still being built, but now in beige stucco with much less sense of a modernist aesthetic. And on the examples I've seen in Koreatown sans the kitschy dingbat or even apartment name on the facade.

Yes, Palms is a good neighborhood to explore; some of the streets off of Venice Blvd. have nearly unbroken street walls. Also check out the North-South Streets below Santa Monica Blvd. in the panhandle of West Hollywood. Down in the South Bay, especially in the area of Torrance by the Beach, there some some great nautical and Tiki themed examples. There are also larger complexes of that vintage, with the same "Sign/Signified" Aesthetic as the typical 8 unit versions.

For a rare example of a nicely restored Dingbat, check out "The Hauser", on, where else, Hauser Blvd., just below Pico Blvd. between Fairfax and LaBrea. You can't miss it on the East side of the street.

Wow - I am so excited about this upcoming trip. I feel much more confident that I'll be able to see some terrific examples of dingbat. Thank you!

also see the north/south streets off of franklin, east of la brea. should be pretty easy with google street view (but not as much fun as driving). :-)

Dingbats are disgusting and ugly pieces of crap:

""By mid-century, a development-driven southern California was in full stride, paving its bean fields, leveling mountaintops, draining waterways and filling in wetlands...In our rush to build we tolerated monumentally careless and unattractive urban design...Some of it [was] awful—start with the 'dingbat' apartment house, a boxy two-story walk-up with sheltered parking at street level and not one inch of outdoor space."[15]"

Most recent anonymous who concludes that "Dingbats are disgusting and ugly pieces of crap": I appreciate your energy, though I don't share your conclusions. That said, can you tell me where you got that quote? I'd like to read more.

Yep, Pretty Vacant is my "ur text" for getting interested in dingbat. Problem is, I can't find my copy! I'll likely end up buy another one. GRRR...

John Chase's book Glitter Stucco and Dumpster Diving has a chapter on dingbats and their development in Southern California.

Following up: Here's a link to some of the cool Dingbats I found: http://woodlandshoppersparadise.blogspot.com/2009/05/la-dingbats-part-3.html.

Kudos on an amazing blog. I grew up eight miles from Downtown L.A. -- and your photos of dingbats inspire in me the mixture of nostalgia and horror that constitutes my response to most things associated with Los Angeles.

In San Francisco, where I now live, we have scattered examples of choice dingbats, although most folks are too busy looking at cutesy-cutsey Victorians to even notice. I'm going to shoot some photos to post to the Web.

Thanks for your kind note, Gerard! Please do let me know when you post those San Francisco pix. I'd love to see 'em!

Hi-- great pics. of the dingbats! I just wanted to share something. The dingbats get a bad rap to some extent. I have never seen or heard much about the inside of these units. Lived in one as a kid. Awesome example of dingbat style. Point being, on the inside, the place was HUGE-every room enormous
tons of closets, lots of windows. Gotta give the dingbats credit where credit is due. I have never seen an apt. that big since

Hi Andrew,
I'm an architecture student and I would like to use your photos for a project. Is that okay? If so, I'm wondering if you could tell me what the licensing is for your photos in these collections? Do know that I do not wish to use them commercially.
Liam Davis

You are welcome to use my photos for non-restrictive, non-commercial use. Please credit them to Andrew F. Wood.