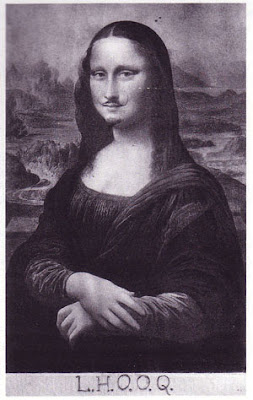 This is the third in an occasional series of posts about modern art. These days, I'm focusing on early twentieth century imagery related to urban life. My ideas are hardly formed; these are just musings, really. All the same, I'm happy to share them with you.

Marcel Duchamp's L.H.O.O.Q. (1919, Pencil on Reproduction of Mona Lisa) is an example of the artist's "assisted readymades": a work that alters found-materials instead of producing something that may be called "original." Duchamp's choice to purchase a postcard of the Mona Lisa and alter it by placing a mustache over the subject's iconic face -- not to mention his decision to scribble seemingly meaningless letters on the bottom of the card -- is an exemplar of dada, an absurdist response to art in the modern era. Like most dada pieces, L.H.O.O.Q. initially appears to reflect the artist's perspective on the world of art itself, working on a meta-level. "What is art?" This piece seems to ask. "Art is appropriation," Duchamp seems to answer. All artists are thieves, from this perspective. And yet great artists are rewarded for their theft while middling artists are mocked as pretenders. Duchamp playfully tweaks that convention by pushing the practice to excess.

Still, I would add that Duchamp goes further in this work, toward a rebuke of modernity itself. In an era of standardization and mechanization, epitomized by the mass-manufactured killings of World War I, L.H.O.O.Q.'s mustachioed image of adulterated femininity conveys a degree of disgust beneath its playful façade. In this way, the piece demands that we ask: What is the value of "originality" when a generation of young people, millions of potential artists and poets, may be slaughtered anonymously on European battlefields? Perhaps, Duchamp might conclude, we are all vandals of the good and the beautiful in this modern age, a gaping maw of destruction produced by our collective (even if unthinking) choices. This perspective might partially explain the rude implications of work's title, said (by some) to suggest sexual licentiousness or lust. After all, what higher values remain to be found in a time when all values seem to be blown away?

Incidentally, I downloaded the image [top of page] from Wikipedia commons. At this time, various wiki "editors" are squabbling about whether L.H.O.O.Q. should be considered a "public domain" work. Proponents of its inclusion cite U.S. copyright law, which apparently defines the piece as freely available. Critics respond that Duchamp's jab at the pretensions of "originality" is nonetheless protected by French copyright law and should not be freely accessible. If this is true, it's an irony that the artist himself would have relished.
Email ThisBlogThis!Share to TwitterShare to FacebookShare to Pinterest
Posted by highway163 at 8:25 AM

Very interesting. No one has an idea of what the letters mean? Something french (ribald) not doubt. :-)

Some interpret the letters - depending on how they're pronounced in French - as signifying a colloquialism that may be loosely translated as either, "she's got a hot ass," or "she's hot under the ass."

Of course, I recently heard a native French speaker add that the phrase could mean some variant of the American colloquialism, "She's in hot water." From that perspective, L.H.O.O.Q may not be so ribald after all.

Unless it's REALLY gross...