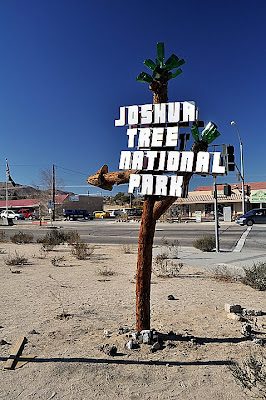 Jenny and I wrapped up 2009 with a post-Christmas trip to Joshua Tree National Park. We'd both been so busy in the last few months, being stressed with various projects and deadlines; it was a perfect time to unwind somewhere simple and uncluttered. 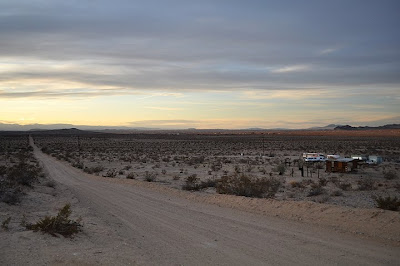 For me, the trip was an affirmation of Hunter S. Thompson's insight, that "Every now and then when your life gets complicated and the weasels start closing in..." you've got to hit the road. OK, I wouldn't have followed Thompson on a Las Vegas ether binge, but I understand why the desert spoke so strongly to the guy: Sometimes you've got to get as far from the city as you can. 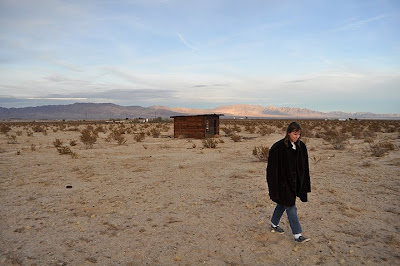 After 8 1/2 hours of driving, the sun was already low in the sky when we arrived at the Morongo Basin. Passing through the city of Joshua Tree, we even spotted a sign for a "street with no name." We had just enough time to survey some of the weather-beaten Jackrabbit shacks of Wonder Valley near Twentynine Palms and plan for an evening of light painting. These cabins were built as homesteads after 1938, attracting folks willing to build on practically any land as long as they didn't mind the lack of electricity, running water, or other niceties. Some are occupied but most have been left to decay slowly away. 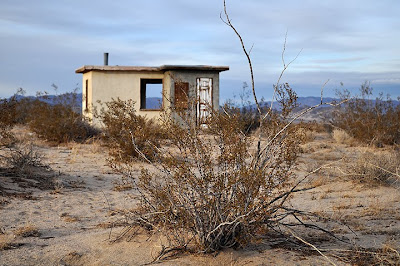 We plodded down dirt roads in search for particularly eye-catching shacks, though our tour was interrupted by a big black dog that loped alongside our car while barking furiously. We raced away, fearing that we might accidentally hit him, turned a corner and slowed down on another street - only to having him start chasing us again! We laughed nervously for a while afterward, wondering where we might see him next. 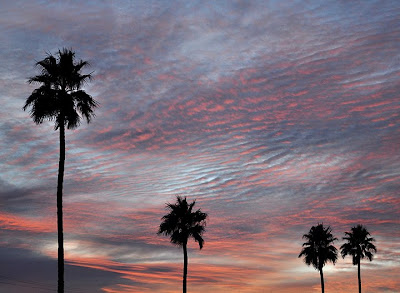 After sunset it was time to drop off our bags at Joshua Tree's Safari Motor Inn and grab a meal. We drove to nearby Pioneertown and joined the crowds at Pappy & Harriet's Palace, a locally beloved honky-tonk that serves a decent enough steak. Yelp reviews told tales of hippies and bikers, but the vibe was mostly family oriented during our visit. We stuck around long enough to hear a traveling Hoosier sing about his "gypsy blood" before heading back to Wonder Valley. The temperature had quickly sunk into the low thirties, and the cabins glowed eerily under the nearly full moon. Wispy clouds scooted overhead, producing ghostly blue trails through the lens of our D-5000. Our goal was to practice long exposure techniques on these weather-beaten shacks. 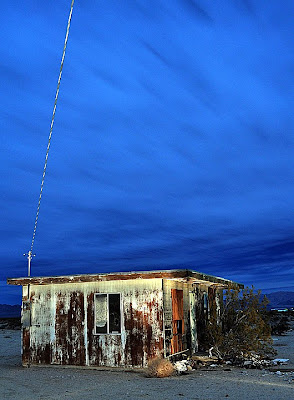 Jenny and I took turns composing shots, with me arranging for bursts of red or green and her opting for more naturalistic effects. We'd open the shutter and paint surfaces with our flashlights for a minute or two. Even as our teeth chattered in the cold and we struggled to work around practical and technological obstacles, we enjoyed the camaraderie of working together. A couple hours later, we returned to the warmth of our motel and a good night's rest. 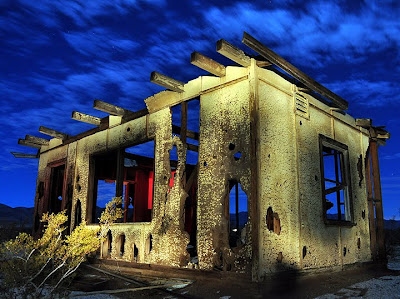 By next morning, the clouds were replaced by crisp blue sky. It was time to visit the park and begin our day's excursions. We had no particular plan, other than a few vaguely remembered landmarks gleaned from cursory studies of websites and visitor's guides. The park's desolation requires that visitors bring food and water, along with layered clothes to accommodate extreme shifts in desert temperatures. As is usual for us, Jenny and I neglected that sort of planning and just rode on in. 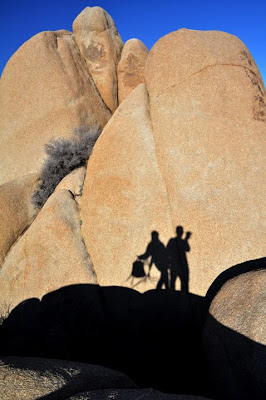 The mild daytime weather attracted lots of visitors, and the idea of following crowds in search of desert solitude makes little sense to me. Happily, Jenny's adventuresome spirit joined with my wanderlust and we departed the popular trails in search of quieter respite. Around us, mammoth rock formations beckoned and we spotted a formation whose phallic nature demanded an ascent. We called it "Action Rock," the point beyond which our adventures waited. 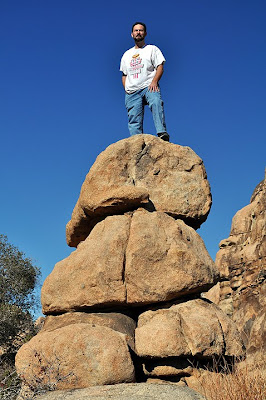 We scampered and shimmied and tramped our ways over the boulders beyond Hidden Valley toward our own peaceful spot overlooking a clearing of Joshua trees. One outcropping called to us, and Jenny and I answered by navigating upward. Despite the seemingly vertiginous height, we worked together to identify safe footholds and climbing routes before reaching our own humble summit. 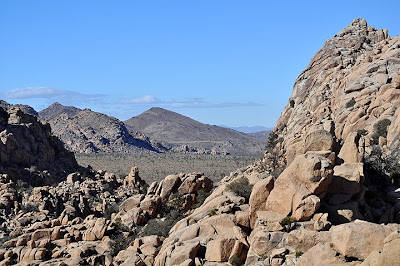 After some rest we headed back down and, using Action Rock as our guide, returned to the crowded trail. It's hard to explain, but the discovery of our own tiny place to commune and enjoy the landscape calmed my search for solitude. Afterward, I didn't mind hearing the voices of all those other visitors; it became fun to share this place. 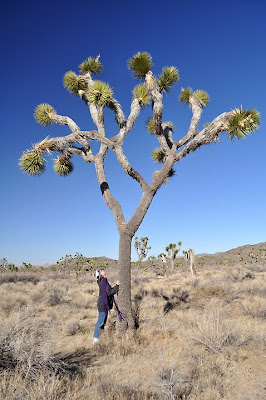 Thereafter we took in the panorama of Keys View, which is diminished somewhat by urban haze, before searching for Joshua trees to photograph. Sharp light, long shadows, and broken shapes created a curiously affecting tableau. Interstate 10 and the big cities it connects felt a million miles away from this place. I should add that while the song refer to a place in New Zealand, I couldn't get these U2 lyrics out of my head: "The moon is up and over One Tree Hill; we see the sun go down in your eyes." 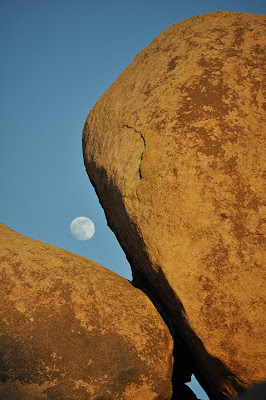 We even saw a couple coyotes by the roadside. This was the moment we'd sought, the time to enjoy real distance from everyday life. Occasionally a car would race by - and we even gave a map to a Japanese couple who'd gotten lost - but mostly we dug the quiet and the breeze and those strange trees. 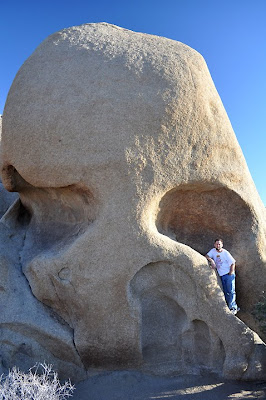 In later afternoon we made quick stops to take photos at Skull Rock and the Cholla Cactus Garden where the setting sun concocted gorgeous illumination for the barbed spines, all as prelude to our visit to Arch Rock. Bathed in brilliant orange, the stone bridge attracted dozens of photographers, each waiting their turn to stand in the empty space beneath. We presumed we'd take one more similar picture until the guy in front of us mustered the courage to climb the arch. Naturally we both had to give it a try. 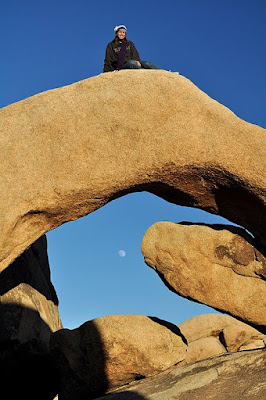 Finding a trail that led to the bridge was easy enough, but taking those steps up the ascending arch was another thing entirely, especially as it pitched more sharply toward the apex. Even though the total climb hardly exceeded 15 feet, that last scramble to the top required calm and focus, but the reward was a tranquil feeling of satisfaction and an awesome survey of the world under the gathering dusk. The moon was rising and people were searching for their own private perches to watch the sunset. We also began our search. 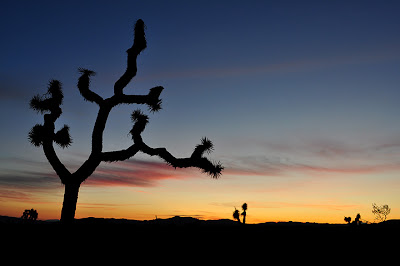 We sought to photograph Joshua trees in the gloaming, and after returning to our car we threaded our way between mountain ranges to find the perfect vista. My accelerator foot grew heavy as we both feared we might miss the right moment. And then we spotted the place, one with plenty of open horizon and hard-scrabble trees. Our fingers ached in the evening chill as bands of red and purple stripped the western sky. About an hour later, as silvery jet contrails drifted under the moon, we left the trees and cranked up the heat. 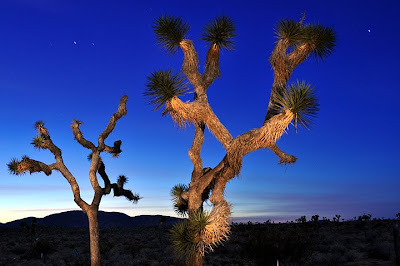 We wrapped up the day with a hearty dinner at the Joshua Tree Saloon, a locals-hangout whose dark interior and bar-quality grub regularly gets snippy online reviews from the SUV crowd. Then it was time to return to our motel. The Safari Inn was not terribly memorable on either night, other than the bright light that burned through the window shades. Still, it was relatively clean and quiet and close to one of the park's entrances, and the price was right. 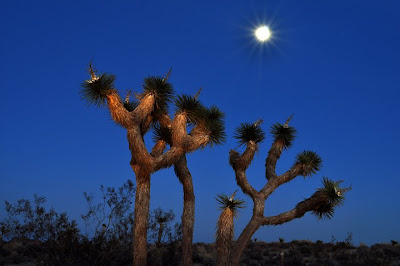 The rest of our trip focused mainly on the return home. Morning began at the Country Kitchen, a friendly din of home fries and local chatter. The place was packed enough for the owner (a Cambodian woman known by regulars as "Mom") to require couples to share larger tables ("You sit together. Be friends."). Then after one last drive through the park we rejoined the yawning highway. Hellish L.A. traffic snarl under fog and drizzle broke up a bland stretch along the interstates, but we enjoyed the chance to chat and reminisce - and plan the next trip.

Learn more: (NYT) Where the Rebel Meets the Road in Joshua Tree

(Photography by Andrew and Jenny Wood)
Email ThisBlogThis!Share to TwitterShare to FacebookShare to Pinterest
Posted by highway163 at 7:00 AM

Not sure if you're a beer fan, but 29 Palms Liquor & Deli has one of the best beer selections I've ever seen at any type of store, let alone one in the desert. I actually haven't been to Joshua Tree in about 5 years--I really hope it's still there.

Your pictures are gorgeous. It looks like another great trip for you two!

Evan: Thanks for the tip! I'm more a cocktail guy, but I'll see about dropping by 29 Palms next time.

Lynnae: I appreciate your kind words. BTW: I dig your website too. It's so cool to see your projects. You are so creative!