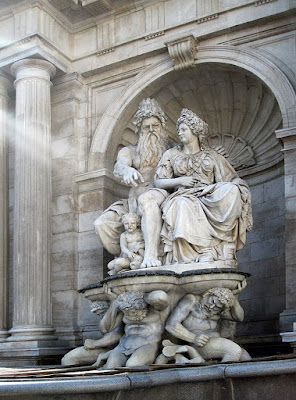 Today begins a 12-part story about my July 2010 trip to Munich, Salzburg, and Vienna. I traveled to Europe this summer to attend the Salzburg Global Seminar's International Study Program, and I met some amazing people and had some great times.

I plan to return to these pages from time to time, adding details and photos (I shot about 1,400 images!). In the meantime, feel free to post comments, especially if you catch typos or opportunities for clarification. Seriously, anything looks hinky? Let me know.

Also, before I begin, I want to express my gratitude to San José State University, its local Salzburg community, and the campus International Studies Program for providing the support necessary to getting me here. It was a wonderful experience.

My trip began with an 11-hour flight on Lufthansa. Somehow I managed to get a little sleep on the plane, despite the usual hassle of crying infants and a guy in front of me determined to recline his seat as far back as the laws of physics would allow. I awoke on Thursday afternoon, having departed California Wednesday night, and mumbled my way uneventfully through customs. Well, there was one minor event. I received a well-deserved lesson in the local appreciation for rules after inadvertently entered the wrong line to get my passport stamped. My first souvenir: a formal explanation of German queuing procedures.

Munich's airport presents a cold and sterile face at the gate, but the semi-roofed area between terminals buzzes with conversation. Smiling at the thrill of finally being outside after a long flight, I wanted to sit under one of those umbrellas surrounding an artificial lake and soak in the atmosphere. But I had to find my way to an ATM to pick up some Euros and locate a train heading for town. Believe it or not, those two minor details -- get money and get moving -- had stressed me more than the prospect of flying across the Atlantic. As usual, the process was just awkward enough for me to feel foolish. Soon enough though I was rolling through green fields toward Munich.

Downtown, I met up with Michael Fallon, a fellow participant in the Salzburg Global Seminar's International Study Program. Back in the States he'd suggested that we split a reservation at the Meininger Hostel and share a train to Salzburg the next morning. Weeks of planning later, we were ready to start our shared adventures. And after I unpacked my gear (and took a much-needed shower) we started walking toward the old town district. They say temperatures are spiking above 100 degrees Fahrenheit back on the Eastern Seaboard, but the weather in Munich was perfect for a stroll. We joined scrums of camera-snapping folks taking snapshots of cathedrals; we stopped to enjoy all sorts of musical performances -- drummers, classical renditions, even a jazz soloist in a bar -- and we hoisted a round at our first biergarten.

For dinner we shared a table with two women in an outdoor cafe called Bratwurstherzl that smelled deliciously of oak fire. At first I felt strange being seated with two strangers, but this turned out to be a "slow food" venue, with locals chatting for hours in a charming piazza. I don't recall anyone leaving throughout the evening. We wrapped up our meal of sausages and potato salad, and lots of bier, with complimentary shots of schnapps. Our waitress felt guilty about being unable to get us some apple strudel before the kitchen closed. Even so, she made sure to count the number of pretzels we ate. After a nightcap at another outdoor cafe, we stumbled back to our room. The plan was for an early morning hike for more sightseeing, sleep being a commodity we could restock back home.

Email ThisBlogThis!Share to TwitterShare to FacebookShare to Pinterest
Posted by highway163 at 11:59 PM