Here's a guest post from Johnathan Huang, a visitor to Shanghai's Expo 2010 who also was recently a student of mine. He shared his impressions with me during a recent email exchange and has graciously agreed for me to repost some of his comments and photos here. From his observations, one gathers that Shanghai has not succeeded in trying to recreate the classic world's fair experience, which was one of the fair planners' goals. Even so, Shanghai has certainly created something big.

About a month before I was supposed to visit my grandparents in Shanghai, my mom told me to pack comfortable shoes because we would be walking a lot; my grandmother had bought tickets to the Expo. "What is this Expo thing, and why were we going to it?" I thought. I honestly didn't have a clue what she was talking about. I hadn't seen or heard anything about this event back home in California. Little did I know, I was about to experience something I had learned last summer in Professor Wood's Rhetoric and Public Life class. 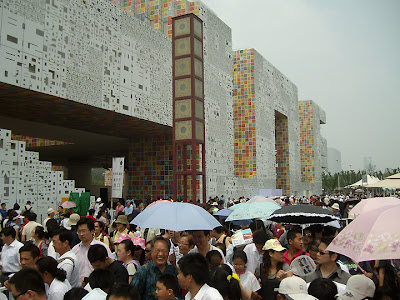 Still jet-lagged from the flight, I watched television to pass the time. Before I even had an opportunity to set foot inside the Expo, there were music videos and commercials about it on many of the TV channels in Shanghai. The motto was, "Better City, Better Life." There was a program called Expo 360 that gave you a sneak peek at some of the pavilions. Some time between landing in Shanghai on Saturday and the Tuesday before actually going to the Expo, it hit me: This was a modern day world fair. Even after seeing these I still didn't really know what to expect. When it was time to go to the Expo we had to get up at 8:00 a.m. to meet up with the tour group and take the bus there.

There were a wide variety of pavilions. Some were large while others were small; some required a reservation while others were just waits. Among those pavilions, I had an opportunity to visit Thailand. This pavilion was fairly small in comparison to its neighbors, Korea and Japan. It was like walking through a small art museum, and for me the wait was no more than maybe five minutes. This was nothing in comparison to the four hour waits for others. I only had a chance to visit this small pavilion because the majority of my time was spent waiting at the main pavilions, such as Japan, Korea, China, and USA. I suppose the larger main pavilions were like walking through a museum too, but they had more content and usually included a main attraction/show/presentation/video/etc.

You might feel differently after visiting a main pavilion like China, but I wish I didn't expect so much. I think I made the mistake of assuming it would be this huge thing because of how big the lines were, or maybe I was already so fed up with the ridiculous wait that when I got in I wasn't able to enjoy it entirely. I felt a little disappointed. 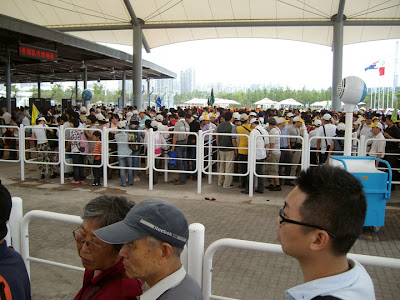 The Expo's main theme seemed to be "sustainability," but each pavilion had its own focus. I could go more into it and describe to you what each pavilion showcased, but I don't want to include "spoilers." I guess if I were to do it all over again I would have just roamed the park and snapped more pictures of the interesting buildings. I would have also taken the ferry to the other side of the river, because there was a lot of the Expo I didn't have an opportunity to see because I had wasted a lot of time in the lines.

If you only have a single day to be at the Expo, your time would probably be best spent enjoying the outside architecture, at least that's what I would suggest. There wasn't really anything inside those pavilions that I would tell any of my friends, "Oh my gosh you have to go see it!" You can also buy Expo Passports, and at each pavilion you can get a stamp, as if you've traveled there for real. But the stamp desks are positioned in such a way at some pavilions that people are prone to leap-frogging over you in line.

The best expo experience would be defined by what you are most interested in seeing. If you want to see detailed technology about sustainability then your best bets are the Japan and China pavilions. Each pavilion has created lots of little videos/cinematics, and I guess these would be considered the main attractions. But they didn't really wow me. Some were tear-jerking, some were historic, some were motivating, some were informative. Come to think of it, a few reminded me of Professor Wood's final class project of one's "Ideal Community."

I suppose each pavilion could be described as a small thumbnail of each country, because each has a collection of things that provided a brief overview of what the country is like, how it sees the future, or how it would like to be represented. There are a lot of hidden gems within the Expo but I did not have an opportunity to find or visit any of them. Symbols of the Expo were all around the Expo and Shanghai. It was a little blue cartoon character named HaiBao. 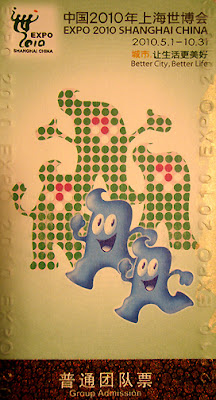 It almost felt like I was in the adult version of Disneyland's "It's a Small World."

Many thanks to Johnathan Huang for sharing his comments about the Shanghai Expo! I'll be adding my own thoughts about the 2010 World's Fair after I visit in August.

(Photographs by Johnathan Huang)
Email ThisBlogThis!Share to TwitterShare to FacebookShare to Pinterest
Posted by highway163 at 10:01 AM