Following up on yesterday's post - sharing my video photoessay Detroit Dirge - I thought I'd share some more photos of Michigan Central Station. For most people, this abandoned site offers the quintessential view of the Motor City, mute testimony to the death of America's industrial might. During my recent visit, I found that hanging around this place all but ensured some conversation. Locals and out-of-towners are drawn to this Beaux-Arts relic, 18 stories high, that dominates the skyline of Detroit's Corktown neighborhood. 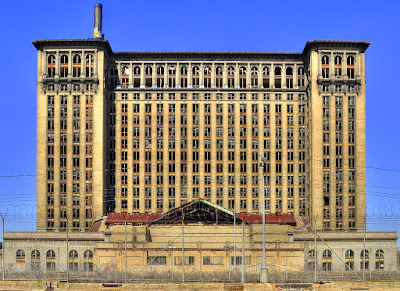 Visiting in mornings and evenings, seeking the right light for photos, I chatted with folks who are attracted to this place. Other times, while I was visiting the Heidelberg neighborhood or photographing the forlorn Continental plant, people would invariably remind me to head to MCS. "It's the one with no windows," one fellow helpfully added. As Susan Saulny writes in the NYT, the last train departed more than 20 years ago. Now the station resides on the National Register of Historic Places, even as preservationists battle critics who insist that MCS should be razed. 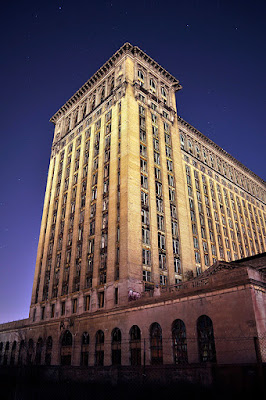 Cops come by the station too, keeping a wary eye out for folks like me. They're not searching for looters so much any more; the opulent chandeliers are long gone, and more practical stuff like copper has largely been stripped. Still photographers and other urban explorers make regular appearances. The signs are everywhere, warning trespassers to beware the razor wire. Decaying floors and other dangers wait to snare the foolish. Unofficial residents too. So I wasn't surprised when an officer pulled up. Just the day before, he said, several college students were caught sneaking around inside. They got tickets for $175 each, while the professor who allegedly inspired the adventure got nothing. He was back in Maryland. The cop lowered his voice with playful menace: "You're not from Maryland, are you?" 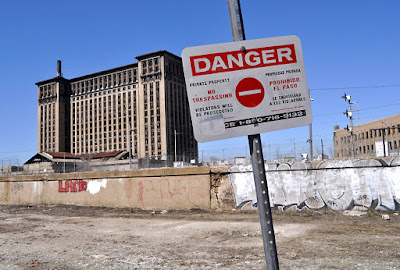 Every once in a while someone would mention that dude who'd been found in the nearby Roosevelt Warehouse, a depository whose books and other school supplies moulder away (a fire back in 1987 didn't help matters). So, the story goes that a guy was spotted in an elevator shaft, frozen in ice. Only his feet were sticking out, like Popsicle sticks. Reporters came around and did their bit - this was a couple years ago - and people still tell the tale. Even during my visit, the police officer recounted the particulars, but he was looking at my camera with particular interest. "Are you sure you haven't been sneaking around the station? It's so easy to get in." No, I replied. I'm staying outside (and that was essentially true). "But it's so easy to get in," he pressed. Hmmm, I thought.

(Photos by Andrew Wood)
Email ThisBlogThis!Share to TwitterShare to FacebookShare to Pinterest
Posted by highway163 at 10:54 AM

Yep, pretty much everybody goes inside!

If you watched any of the recent TV series Detroit 187, you'd see some nice inside shots from when they did a few scenes in there.

Check out Bruce's site for some nice interior photos, including some shots from the roof!