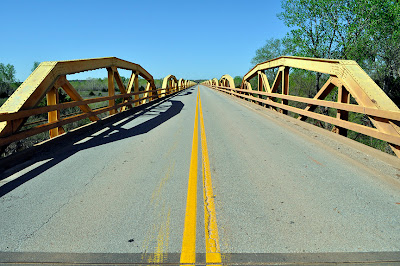 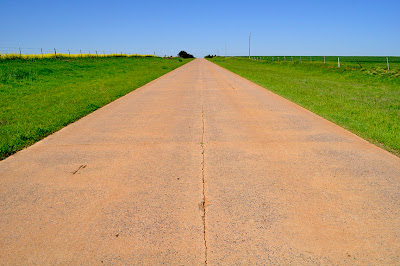 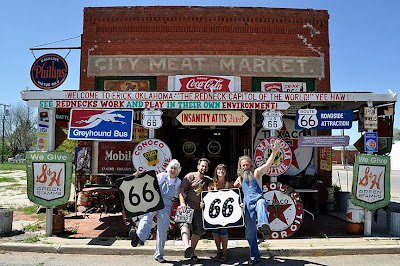 Today began early: a high speed burn through Tulsa (making up some time from yesterday's lengthy - and lovely - stopover in Gay Parita) - all in hopes of meeting Harley and Annabelle: the infamous "Mediocre Music Makers" of Erick, Oklahoma.

Showing up, I had no idea what to expect. Despite the presence of a nearby “open" sign, the doors to the shop were locked. I understood, figuring that Annabelle was resting. I was simply happy to enjoy the breezes and the quiet of an Erick afternoon.

I sat in one of those old metal motel chairs near the shop for a while, bought a pop and the nearby store, and then prepared to make my way west. For no particular reason, I drove a circle past a house done up as gaudily as the shop. I saw a scraggly looking dude and thought to myself, “Oh, man, that’s got to be Harley!”

I introduced myself, saying something like, “Hi, you’re Harley, right? I don’t know you, and I certainly understand that y’all aren’t performing these days. I just wanted to say hello, and to wish you and Annabelle well. I hope she’s OK.” 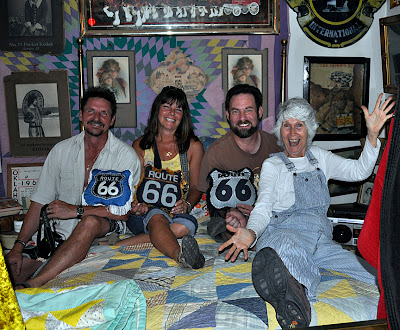 Harley grabbed me in a bear hug and insisted that I join him inside. Two other folks, Canadian tourists, came along within a couple minutes and joined us in the living room. So there we were, all of us sitting in Harley and Annabelle’s insanely rambling abode.

I shared my best wishes with Annabelle, and I assured her that I was merely happy to see her. Certainly she wouldn’t want to perform, given her need for rest and recuperation. But she insisted that the company and a chance to sing a little helped her spirits.

We swapped stories, took pictures (I’ll have to explain the bedroom pix to my spouse!) and toured both the house and the shop. I’m not normally a “hugger,” but I was hugging everyone as we departed about an hour later. I also followed Gary Turner’s advice, asking them to sign my copy of David Wickline’s sublime Images of Route 66.

“Only special people,” Turner insisted. Well, no doubt, Harley and Annabelle are special people. At this point, I’m sure that all roadies know that the Mediocre Music Makers can’t perform on a regular basis. This was just one of those lucky days. I’m hoping that all lovers of 66 will keep a warm thought (and maybe say a prayer or two) for these wonderful folks. Harley and Annabelle have given us so much.

The rest of the day was lovely: driving west through Texas, adding my spray-paint greetings at Cadillac Ranch and taking a detour somewhat north to shoot a remake of the final scene from Cast Away (I'll see about editing the video later tonight or tomorrow). Now I'm in Tucumcari, staying at the perfect home away from home: the Blue Swallow Motel! 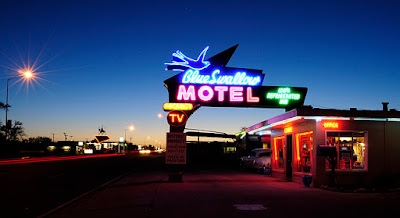 Email ThisBlogThis!Share to TwitterShare to FacebookShare to Pinterest
Posted by highway163 at 10:30 PM