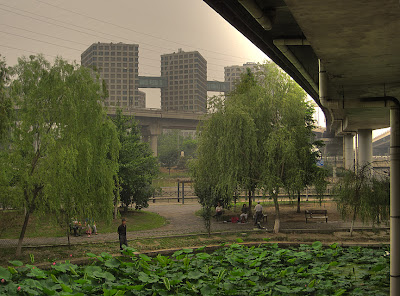 This morning I will tour Beijing's Linked Hybrid [more pix here]. The skies are dim and soggy but my spirits are high. If only I can get inside! You see, most public and semi-public places in this city are guarded, at least in a perfunctory way, so gaining entry to this housing complex (built, but still under development) won't be easy. Still, I've waited to see the Hybrid for about a year; I have to try. Writing in the New York Times, Nicolai Ouroussoff sets the scene by interviewing designer Steven Holl:


"'In America, I could never do work like I do here,' Steven Holl, a New York architect with several large projects in China, recently told me, referring to his latest complex in Beijing. 'We've become too backward-looking. In China, they want to make everything look new. This is their moment in time. They want to make the 21st century their century.'"

"Holl has reason to be exhilarated. His Beijing project, 'Linked Hybrid,' is one of the most innovative housing complexes anywhere in the world: eight asymmetrical towers joined by a network of enclosed bridges that create a pedestrian zone in the sky. Yet this exhilaration also comes at a price: only the wealthiest of Beijing's residents can afford to live here."

Striding past the 20-something guard, I flash my friendliest most I'm-not-a-Trouble-Maker smile. He smiles back, seemingly aware of what I have in mind. I hear him whisper something into a walkie-talkie and start snapping photos as fast as I can [I'll post pix later]. The place is mostly empty, a promise of future throngs who will one day fill those glittering skywalks. I drift back to images of Metropolis, Beijing's gray clouds evoking a black and white movie in my head. Then comes the moment of sweet serendipity when another guard decides I've stayed long enough.

"Of course," I reply. "No problems here! Happy to go. I'll just shut my camera off and..." Yep, I'd just gotten the last shot I needed anyway. I depart, walking past exercise parks filled with elderly folks, stopping to watch bird sellers hustling for business on a bridge. Later I will listen to a group of musicians gathered to practice in a leafy park. And then... well, I'm not sure. The heat is oppressive, but I have no complaints. 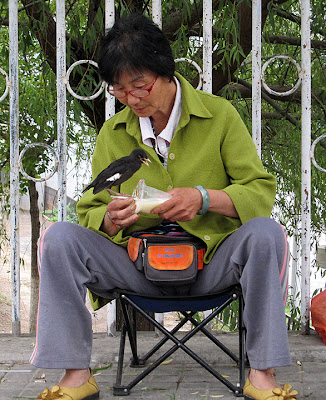 In the afternoon I opt for a taxi to the 798 Art District. Right away I know I've found an ideal site to study Beijing street art [Check out more pix!]. Along with more traditional galleries and some eye-catching sculptures, the walls of this district are covered with stencils, sprays, and murals, aggressive, ephemeral stuff whose sentiments convey more public critique of the PRC than anything else I've seen in China. Even so, Beijing tolerates this place, preferring to corral would-be dissenters into this social safety valve. As you'd guess, plenty of other taggers and graffiti reject 798 as being overly safe, preferring to throw their art onto less authorized surfaces. Oh, well. I know my students will love this place. 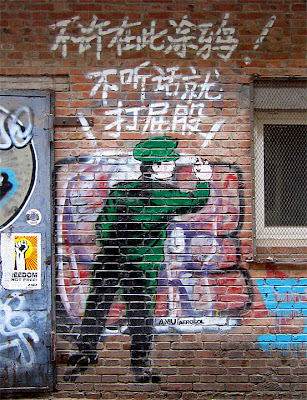 Day 5 | Day 7
Email ThisBlogThis!Share to TwitterShare to FacebookShare to Pinterest
Posted by highway163 at 11:00 PM