Today I delivered my first off-campus presentation for the U.S. Embassy in Belarus. The event was the nation's International Book Fair held these past few days in the capital city. I had little idea of what to expect until I started noticing oversized posters throughout the city advertising the event. Like, really, really big posters! 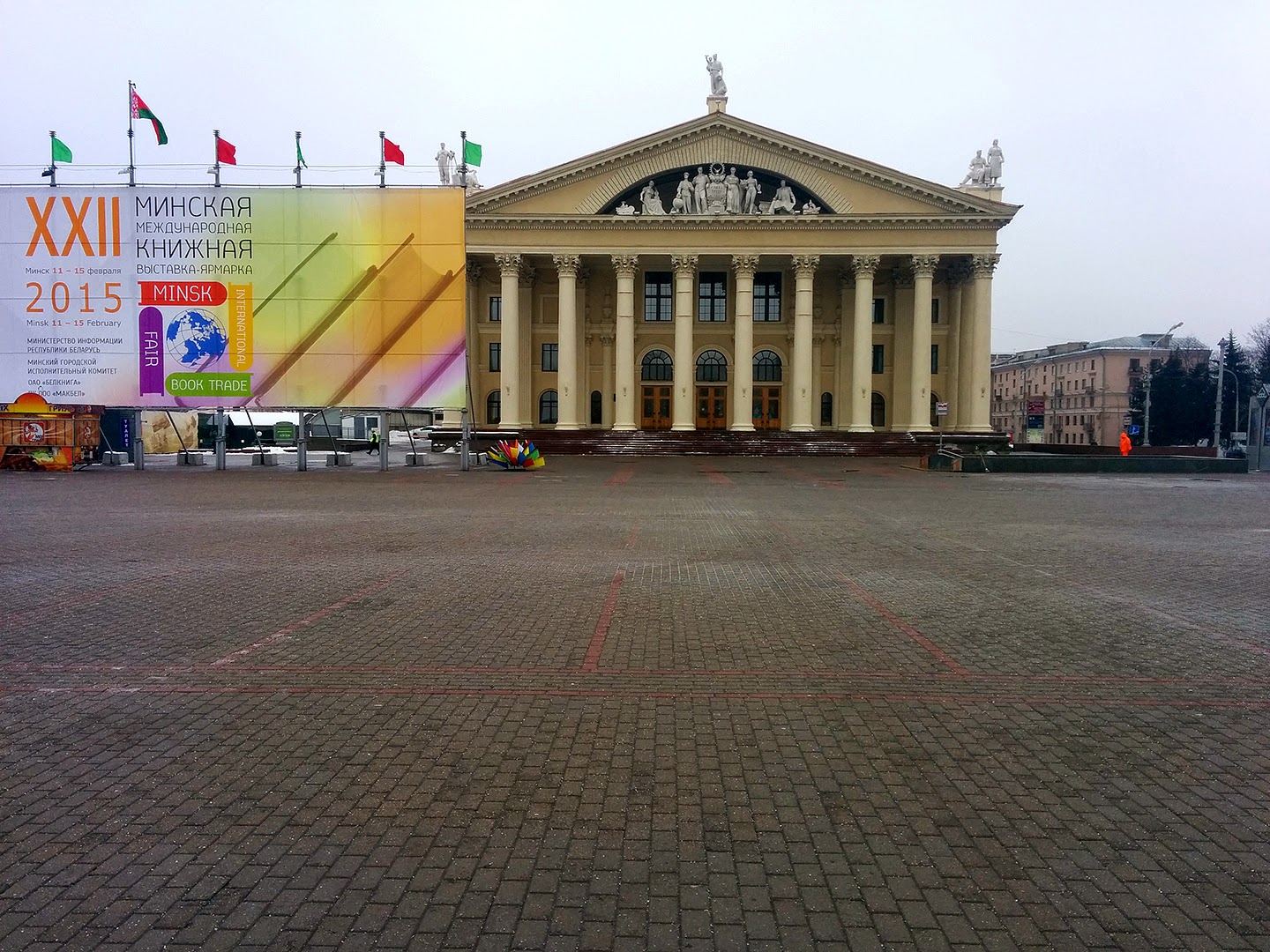 So today was the big day. I arrived at about 10 a.m. to set up and noticed... that the event center was almost empty.

"This doesn't look good," I whispered to myself.

My presentation was part of a series of talks commissioned by the embassy on the theme of Undiscovered America. I'd fretted for a couple days, trying to dream up a topic that would fit that vision. At first I went overly historical: "Little known facts about the Constitutional Convention," stuff like that. Then I heard about my colleagues' topics. They were talking about national parks, Native Americans, southern music. At once I knew what to do.

I built my talk around Route 66, discussing the Mother Road as a lens upon an America not often seen in Hollywood movies and reality TV shows. Many folks in Belarus presume that all Americans are wealthy and, let's admit it, spoiled. Few have met an American or heard an excerpt from John Steinbeck's The Grapes of Wrath about the Dust Bowl:


"66 is the path of a people in flight, refugees from dust and shrinking land, from the thunder of tractors and shrinking ownership, from the desert’s slow northward invasion, from the twisting winds that howl up out of Texas, from floods that bring no richness to the land and steal what  little richness is there. From all of these, the people are in flight, and they come into 66 from the tributary side roads, from the wagon tracks and the rutted country roads. 66 is the mother road, the road of flight."

The presentation included a discussion of how highway travel represents that quality of the American Dream that enables people to reinvent themselves far from home, unconstrained by our backgrounds or our histories. It also included highlights of tourist traps, motel architecture, and wonderful people like the recently departed Gary Turner who stuck around the breathe life into the highway, even after its replacement by the interstate system. And naturally I included my video of Route 66 neon.

As I walked around the expo center to settle my jangled nerves, I wondered if anyone would show. To attract interest to the slide announcing the time of my talk, I hooked my roadtrip playlist to the speakers. Owing to the interesting acoustics of the site, with its undulating roof that resembles a jellyfish sweeping through the water, I'd sometimes hear echoes of my favorite highway songs far away.

Tom Petty's Runnin' Down a Dream alongside the Chinese display. Johnny Cash's I've Been Everywhere past the Russian tables. Simon and Garfunkel's America near the Iranian exhibit.

Five minutes before my talk was scheduled to begin, there were about four people milling nearby. Then with one minute to go, dozens of folks roared in and grabbed seats. I launched into my remarks, focusing on the people sitting nearby, only then to notice that another dozen or so were listening from outside the exhibit. I never did get a full tally, but I'd estimate that about 50 people saw the talk. 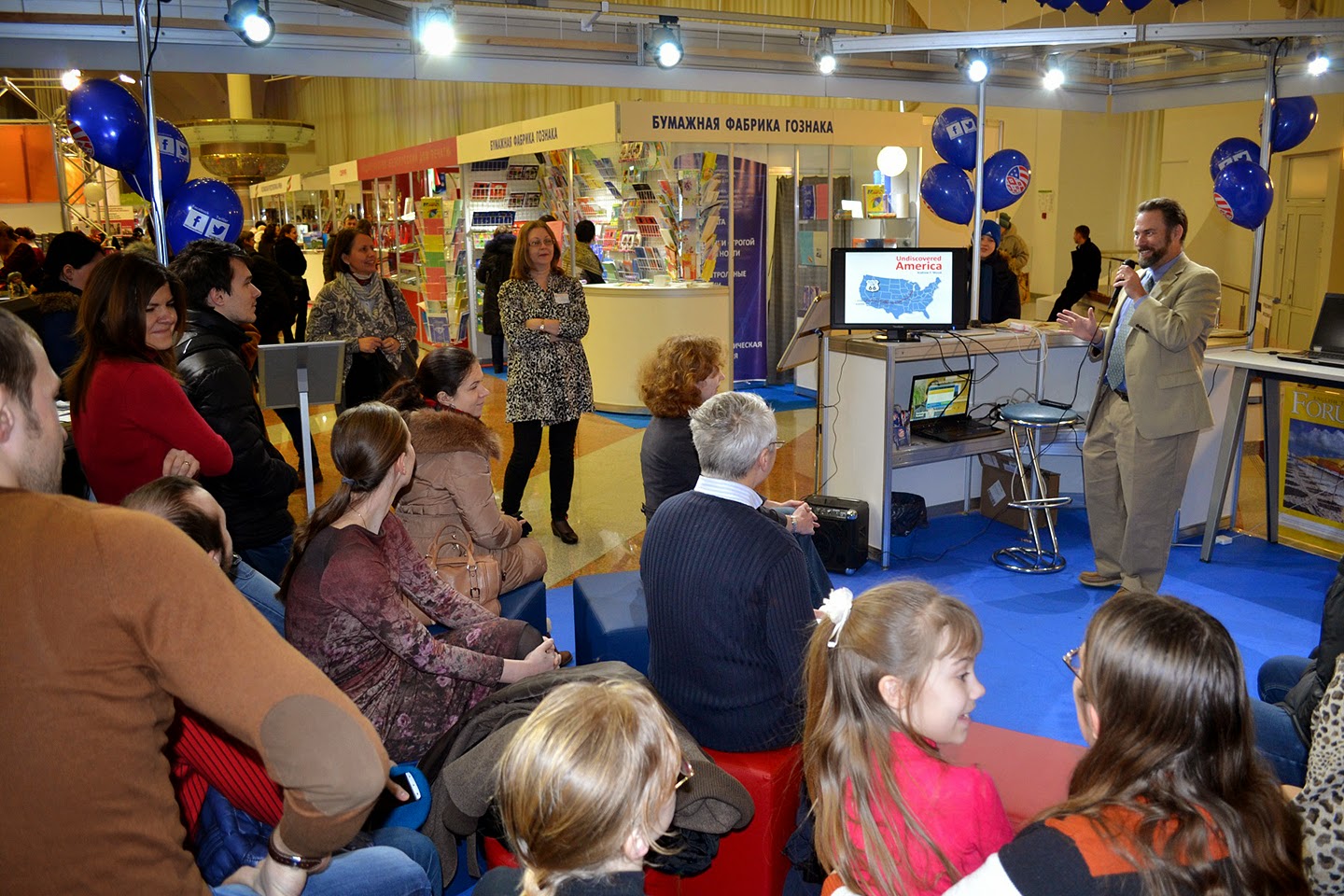 • Seeing two of my BSU students who'd taken the bus so they could catch my presentation.

• Diving into an a cappella rendition of "Get your kicks on Route 66" and hearing the audience clap along.

• Getting a laugh when I explained the meaning of a "No-Tel Motel." 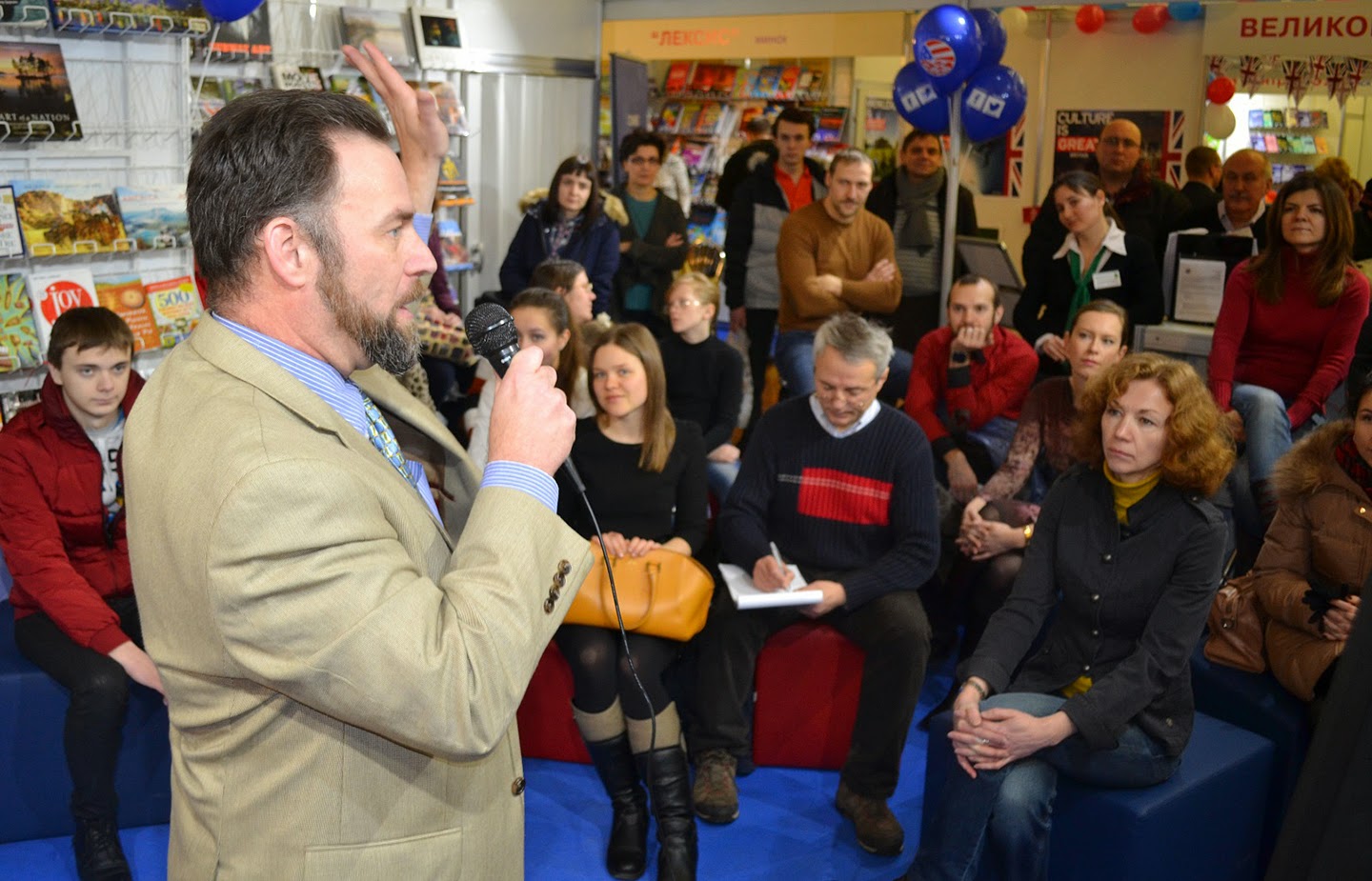 After the talk and a rollocking question and answer session, several folks stayed to chat a bit more. And I've already received invitations to present my Route 66 speech two more times, once at the Embassy for visiting teachers and elsewhere at a software company in Minsk. And I've gotten a tip to check out a song about the road from Moscow to Brest, Belarus.

So many new highways to explore!
Email ThisBlogThis!Share to TwitterShare to FacebookShare to Pinterest
Posted by highway163 at 8:22 AM

That is so great! I wish I could have been there to see it and catch the great vibe in the room. What a fun experience to share this great example of Americana with Belarusians! I can't wait to hear some of the questions they had. Great job!

I love the description of the pre-talk nerves, and knowing that you provided the playlist for the entire exhibit. Sounds like a great time!

And I am still crooning "get your kicks on route 66" and "standing on the corner in winslow arizona". Thank you, Andy! That was great!

I know you can relate, AMT. We both know what it's like to work through those pre-talk nerves.

And Veronika: Thanks for your kind comments. I'm so glad that you enjoyed the talk!