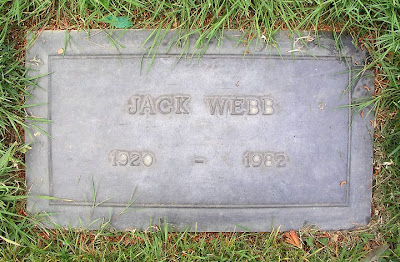 While on my Route 66 trip, I had the occasion to visit the gravesite of Jack Webb. Readers of this blog know that I have long been a fan of Webb's shows, like Dragnet, Adam 12, and Project UFO, and I've often thought that it'd be somehow fitting to pay my respects to the man who produced these shows. Of course, I'm not much for cemeteries, but after I had arrived at the Santa Monica Pier, concluding my journey of more than 2,000 miles, I began to wonder just where Webb is buried. I'd heard something about Forest Lawn Cemetery, so I figured I'd start there.

The next morning was Sunday, and I met an old high school friend whom I hadn't seen in more than 20 years. He and his family shared a pleasant breakfast with me at Bob's Big Boy in Burbank, and as we were parting I asked how close I was to Forest Lawn. "Very close," was the reply, but I had some difficulty understanding my friend's directions. So they drove out to Forest Lawn with me following behind, waving farewell once they were confident that I could make my way. The next step was finding the gravesite. Fortunately Jenny was at home and was willing to "vector me in" as we say in the Wood Family, looking up Jack Webb at Find a Grave. Within seconds, she found his plot: Sheltering Hills, Lot 1999. Then I looked around and realized that I had no idea how to find one gravesite among thousands.

At this point the final piece of the morning's kindness trifecta came into play. I spotted a maintenance worker parking his scooter and figured he might wave me in the right direction. Instead he smiled and offered to walk me right to the spot. Scraping grass from the numerical markers, he wound us steadily higher up the hill before finding the grave. I thanked him and looked down at last on the simple site. No flowers, no monument, no special symbolism, just "Jack Webb 1920-1982." It seemed sadly appropriate. Jack was a driven man, focused rigidly on his passions of television production and jazz music, leaving little room for close friendships. I imagine that few mourned him in a personal way.

I'd come a long way, minutes from Burbank, days from Chicago, to be here. And yet I quickly snapped a couple of pictures, focusing my thoughts on lighting and composition, before turning to walk down the hill. A few steps later I realized I'd missed the point of this visit, and I returned. Standing once more over the gravesite, I murmured a few quiet words of thanks. Jack Webb always seemed to be slightly behind his times, at least in the Technicolor world of the 1960s. By the time I recognized his particular style and began to watch shows for their production as much as their plots, Webb had become the stuff of satire. But I thanked him genuinely for bringing some pleasure into my life. I kept my words simple, as he would have wished. And then I turned away one last time.
Email ThisBlogThis!Share to TwitterShare to FacebookShare to Pinterest
Posted by highway163 at 8:25 AM