We just returned from Portland, Oregon, where we visited Reed College (unofficial motto: Communism, Atheism, Free Love) a second time. Vienna has been accepted there, but she's still deciding between Reed and UC Santa Cruz. Thus we made another trip, this time to hang out with Reedies, attend some Q&As, and drop Vienna off to stay overnight in a dorm. That latter part left Jenny and I with some free time, so we toured a couple of Portland's famed tiki haunts, one venerable and one relatively new. 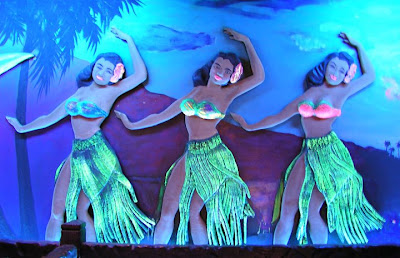 Our tour started with The Alibi on Interstate Avenue. This place has been around since horse and buggy days -- it was once called the Chat-n-Nibble -- but transformed itself into a tiki bar and restaurant in the postwar era. Even now The Alibi features a glorious animated sign, complete with neon flames, and the dim interior hides all manner of "Polynesian" goofiness, most notably a trio of day-glo hula-babes. For the décor alone, and its proximity to the glorious neon of the Palms Motor Hotel, The Alibi is worth a visit. The problem, sadly, is everything else. The food is lousy, the music is straight from 70s AM radio, and (most tragically) the bar's basic Mai Tai tastes like sweetened motor oil, safely without a hint of booze. It's so awful that I couldn't finish the thing. Jenny and I downed our greasy drumsticks and potato skins and scooted fast. 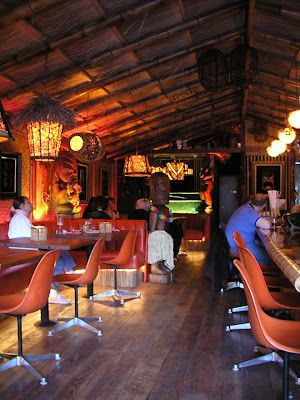 Our evening took a positive turn when we headed for Broadway, navigating a nest of one-way surface streets and finding a place to park the car. At last, we entered our other stop for the night: Thatch. Stepping onto the wooden footbridge over a murky grotto at the door's edge, we found ourselves into a narrow but cheerful tiki bar that opened in 2007, quickly earning a reputation is a regional must-stop for tikiphiles.

Pointy puffer fish glowed red and orange and green and imposing idols lured us from the city into a fantasy of 50s and 60s-era American kitsch. We ordered some pu pus, including a carafe of cashews (though macadamia nuts were available, too), and I settled into an artfully mixed Mai-Tai: fruit-garnished, frothy, amber-colored, semi-tart with just a hint of sweetness under the parasol. Perfect. I followed that libation with something called an Aviatrix, which is a staff member's interpretation of an 1850s-cocktail. Having no point of comparison, I happily sipped the complex drink, offered by a dude who assured me that he was the best bartender I would ever have. Things got blurry right about then and I knew quickly that there'd be no third drink for me. I will return, though. Thatch is a great tiki bar. All the more reason for me to hope that our daughter will choose Portland!

(Photographs by Andrew Wood)
Email ThisBlogThis!Share to TwitterShare to FacebookShare to Pinterest
Posted by highway163 at 2:16 PM