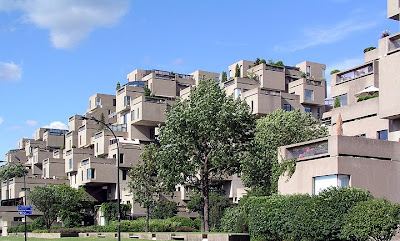 During our 2009 trip to Montreal, we visited Habitat 67, a vision of modern housing featured at the world's expo held more that four decades ago. This habitat, designed by a then-young architecture student named Moshe Safdie (who has since forged a rich and storied career) reflects a radical rethinking of public life. It is hardly beautiful, but it is fascinating. 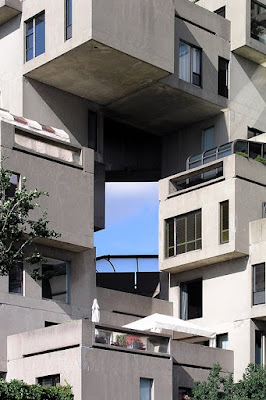 Habitat 67 sought to demonstrate how modular construction could balance the demand for increasing urban density with the human need for privacy and greenspace. The cantilevering of 354 prefab concrete units, akin to the construction of legos, was meant to be augmented with shops and a school, but high costs caused the project to be scaled back. 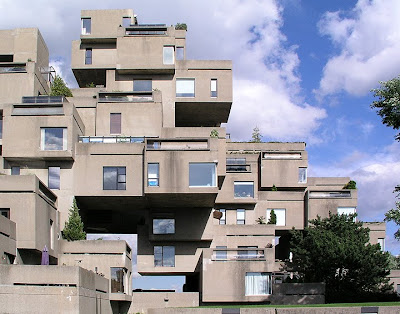 The Habitat's distance from downtown Montreal, along the Saint Lawrence River, complicates efforts to visit this spot. If you're taking the metro, you'll depart at Jean-Drapeau and then need to hoof it over the bridge to the Marc-Drouin Quay. Expect at least a 20 minute walk, and be careful to avoid altercations with fast-riding bicyclists who also use the bridge. 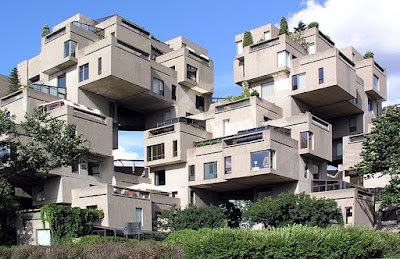 On site, there is little opportunity to tour the three pyramids of Habitat 67. The complex is owned by tenants, and private property signs abound. Still, it's worth the trip, even with the expectation that you'll likely just stand outside the place to shoot pictures. Visiting this place you can visualize a 1960s-vision of public space in which one person's roof becomes another person's garden. 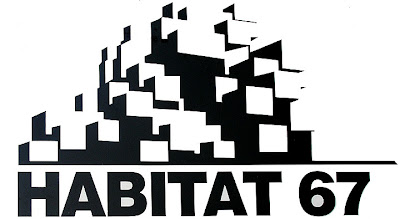 (Photographs by Andrew Wood)
Email ThisBlogThis!Share to TwitterShare to FacebookShare to Pinterest
Posted by highway163 at 12:33 PM