Travelers Motel - Before and After 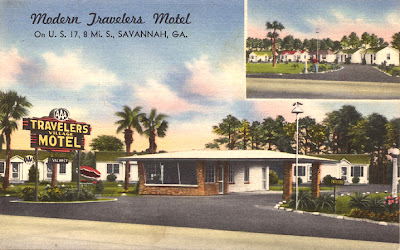 I love the name Travelers Motel, with its indisputable reminder that the local "hot pillow trade" will not find accommodations around here. With this post, I thought I'd add to my growing collection of before and after images, focusing on a long gone Savannah motel. The first card was likely produced in the 1940s, in an era when motels still included distinct cabins. I recently purchased this card to provide some historical context for the next two, which I've had for a long time. 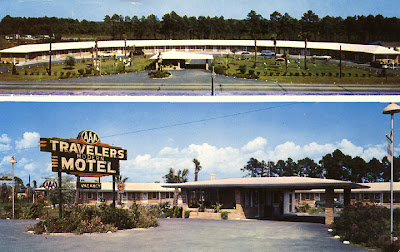 The middle card is postmarked 1954. Notice the word "modern" on the marquee. By the mid-fifties, the use of "modern" as a descriptor was beginning to lose its potency. Still, numerous moteliers continued to employ the term as an assurance of cleanliness and efficiency, connecting their properties to a vaguely tangible feeling of progress. However, the bottom card, postmarked 1967, demonstrates how the word had almost entirely fallen from use. What remained was the motel's too-clever-by-half slogan: "Enjoy the 'rest' of your life." 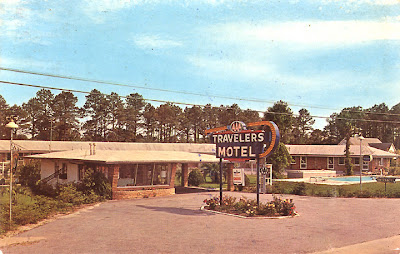 The middle and bottom cards also feature brief handwritten remarks. The bottom includes a basic "having a swell time" note, along with a reminder that home remains the best place of all. But the middle card is actually kind of sweet. The addressee is "Mr. Whitney Green," nothing surprising there. But the note is clearly written to a little boy, adding some pathos to this card: "Dear Whitney: Are you being a good boy? Did you have a good time at Brenda's? Hope you had a nice party. Lots of love from Mama & Daddy." The author also adds a piece of marginalia, "Yesterday we went over a high bridge." I'll bet Whitney was pretty impressed by that news.

I have no idea of the fate that befell the Travelers Motel. Recent google searches reveal no news of whether this property (advertised as being eight miles south of Savanna, Georgia, on highway 17) was razed or simply renamed. If you know anything about the Travelers Motel, post a reply!
Email ThisBlogThis!Share to TwitterShare to FacebookShare to Pinterest
Posted by highway163 at 9:04 AM

Index Labels: before and after, motels, postcards, roadside