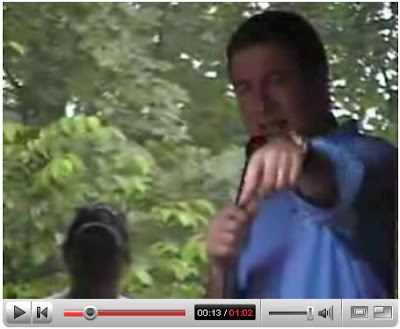 CNN has posted a fine overview of YouTube's impact on the political scene, beginning with George Allen's infamous Macaca moment and concluding with the anti-Hillary Clinton 1984 video and the booty shaking I got a crush on Obama video. Along with other examples, we see how "YouTube is empowering average Americans to affect the political process like never before. That in turn is affecting the campaigns. The candidates don't have total control over their message any more, and that's forcing them to change the way they campaign" (para. 26). Given that CNN is itself precariously perched between old and new media, their coverage of YouTube politics is fairly good. Moreover, as I think about the implications of this phenomenon I am inclined to be optimistic about America's political future.

Perhaps the most far reaching impact of YouTube and similar video sharing sites is the potential to loosen the Gordian Knot of our current campaign financing system. Today any serious candidate must wade through ludicrous amounts of money to purchase television ads necessary to win the "air war." Forgetting momentarily the corrupting influences of this mode of fundraising, we might focus on the kinds of politicians who pass through this old-media gauntlet: packaged, artificial, hollow. YouTube offers a means to prick those hot-air balloons, to ensure, for example, that people like George Allen are revealed for what they are.

But much more importantly, much more optimistically, one may hope that YouTube politics represents a flattening of the big-money hierarchy. Since anyone can upload a video and anyone can respond to a previously posted message, we might imagine a public sphere that contains more room for better ideas, one not shaped by last-generation thinking and institutional demands. Just as the music industry is shaken by web 2.0 distribution networks, the political class must confront much more sophisticated and engaged voters who no longer trust the "experts."

Sure, we'll see lots of silly and stupid stuff like the new Hott4Hill video, but we'll also get thoughtful and surprising contributions that would never fit into yesterday's system (and yes, I loved Mike Gravel's bizarre rock video). As a bonus, YouTube politics may help us bypass those tired First Amendment quandaries raised by campaign finance reform advocates and detractors. Perhaps we don't need to regulate television ads. We need merely make them -- and those who produce them -- irrelevant.

After all, who needs expensive television ads when good ideas can be distributed online for free?
Email ThisBlogThis!Share to TwitterShare to FacebookShare to Pinterest
Posted by highway163 at 8:09 AM

FYI, you might appreciate this pesentation on the impact of Web 2.0 and social media on journalism, particularly coverage of election 2008 -- amusingly enough, it was the entry immediately following yours in my Facebook notes page.