Time for another video from our 2011 European Grand Tour. This one is from the infamous Reeperbahn, a street in Hamburg's St. Pauli district. OK, I admit it; I'd never heard of this place. Jenny and I were simply discussing where we might visit during our 24-hour stay in town, when she spotted a neon sign on a postcard and saw the name "Reeperbahn." We figured this place might be good for some night shooting, so we found a stop on the metro and set our course.

Little by little we realized that the Reeperbahn is actually a red light district. Later on, researching the meaning of the name ("rope-maker's way" in English), I came across a quote from John Lennon who played some of the rowdy clubs along this street before the Beatles made it big: "I might have been born in Liverpool - but I grew up in Hamburg." It's not for nothing that the Reeperbahn intersects with another famed street called Große Freiheit. Translated into English, that means "Great Freedom." Of course, the nature of this freedom is subject to debate.

Jenny, a devout Mormon, wasn't too impressed with the category of entertainment for which Reeperbahn is world-renowned. We were both especially saddened by the sight of prostitutes displaying themselves in back-alley windows like products to be consumed and discarded. Their numbed expressions would be featured on no local postcards. Nonetheless, I had to cruise these Hamburg streets for a little while (the live sex shows were off-limits, though; Jenny was rather clear on this point). The Reeperbahn's collection of animated neon signs is weirdly stunning. 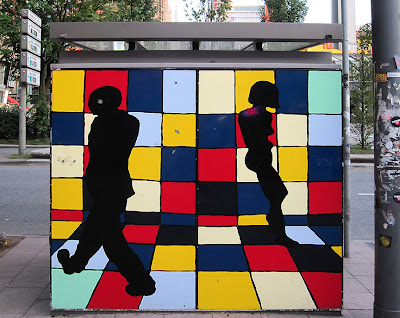 Email ThisBlogThis!Share to TwitterShare to FacebookShare to Pinterest
Posted by highway163 at 8:27 AM