Today we left Budapest. I have to say that we found lots to love about this city, even though we though it’d have no chance against Prague. Castle Hill, the Parliament and Basilica were all gorgeous, especially at night. I even enjoyed Memento Park with all of those Communist statues. It was quite interesting. But it was time to move on to Athens! 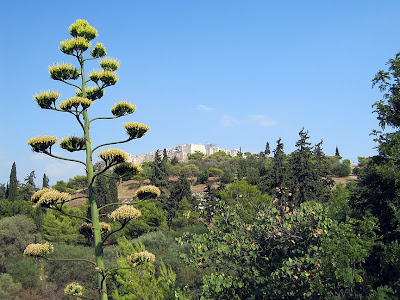 The flight was uneventful, though metro ride into Athens began with a 40 minute wait and then a long slog into town. Happily, we were rewarded for our patience. As we stepped onto Thessio station, we turned to see the Acropolis rising above us! We were stunned. We knew that our hotel was nearby, but we had no idea how close we were to a place that had captured my imagination since elementary school. Andy snapped a quick shot (maybe he thought the Acropolis might disappear while we were checking into our hotel!) and then we headed off to find our room. The Jason Hotel turned out to be lovely – though in a rough neighborhood. It boasts a rooftop restaurant whose view of the Acropolis is simply amazing.

True to form, we had hardly dropped off our bags before Andy insisted that we bound up that hill. It was about 5 p.m., so I was skeptical that we could get in and see much. But Andy couldn’t wait. We walked along a pedestrian walkway lined with vendors selling jewelry and trinkets. Sometimes we saw bored looking fellows selling jelly-like balls. The vendor slaps one down and gazes up in anticipation as the thing flattens like a pancake before reforming into a ball. “Huh? Huh?” his expression would plead. It looked like a miserable job, selling those things.


As we walked up the steep incline, we found ourselves caring less about the Acropolis and more about getting something cold to drink. Right at that moment we spotted a little vendor selling frozen lemonade and other drinks. These folks know a bit about product placement. After a rest and some refreshment we were ready to see thousands of years of history. Standing on that hilltop, we surveyed the city below. It was stunning - especially that view over the Theater of Herodion. It has been renovated and is now used for actual performances (I think Yanni played there). 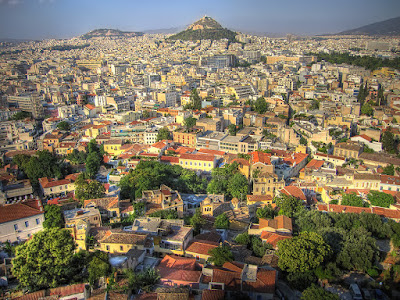 The Acropolis itself was more impressive than either of us had anticipated, especially the Parthenon [Check out more pix here]. If you’re like me, you have only heard or read about this in history class. I never thought I’d actually be standing next to the structure built over 2,400 years ago. Coming from the U.S., I’m not used to structures that old. Sure we’ve seen Mesa Verde, where a civilization lived thousands of years ago in cities carved upon cliffsides. But these immense Greek are not carved out of rock; they’re built up from the ground. That they have lasted this long is truly impressive. Andy was off taking lots of pictures while I meandered through more slowly, taking it all in.

I also really loved the Erechtheion where statues of ladies (the Caryatids) stand in graceful repose as pillars. They are the only statues still on the Acropolis and are quite beautiful. The view from all around the Acropolis is amazing, and we loved the fact that we could actually walk around and through it (though we couldn’t get close enough to touch the Parthenon or many of the other structures). But we were both awestruck. 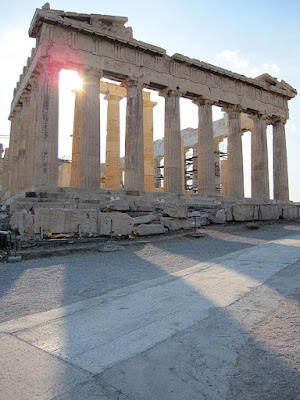 The best part was the light. Since we arrived in late afternoon, we saw a wonderful warm light that set the hilltop aglow in reddish orange. Finally, when it was time to leave, we noticed another hilltop just off to the side. Andy exclaimed, “That must be Mars Hill!” I was perplexed, having never heard of this place. So we went to explore. One of Andy’s colleagues, David Terry, spent six months here, much of it on Mars Hill. He eventually published an article about the performances of tourists and locals who hang around this historic site. 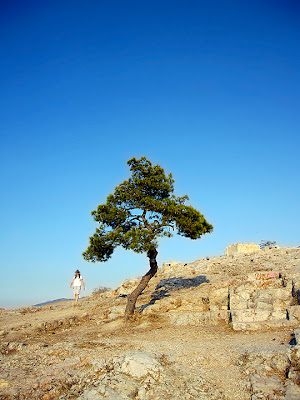 Following David’s example, we chatted with people on the hill and thus learned something new. It turns out that this is the place where Paul preached! I had no idea, but I learned about this dimension of Mars Hill while talking with a group of protestant missionaries. Mars hill was beautiful but slippery. The marble was so smooth that we had to walk carefully. It is so easy to slip and fall! It is also a great place to get a picture of Acropolis. 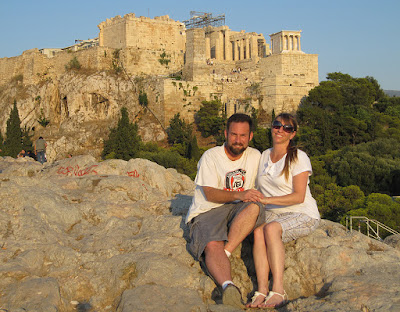 We made our way down the hill another way, toward the Ancient Agora, and later we spent some time bumming around the Plaka. There were lots of stores for shopping and restaurants: a loud and busy part of town. As we wandered around, looking for a good but less expensive place to eat, restaurant owners would greet us, promising that they sold the best food in Athens. One even kissed me on both cheeks, assuring me (and Andy, smiling awkwardly nearby) that I was beautiful - and would be especially charmed by his restaurant. Unfortunately I was less charmed by the high prices on the menu, so we kept walking. 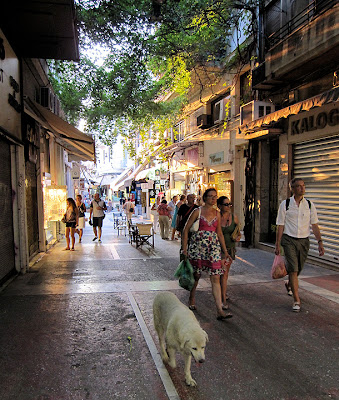 We settled on a place called Centrale. It was time for some Greek food! Andy got the kebabs and I got the moussaka. The food was great and the prices were reasonable. We sat outside and watched as tourists promenaded into the evening. Later, we found some tasty gelato for dessert and then returned to our room. Another great day.

Day 10 | Day 12
Email ThisBlogThis!Share to TwitterShare to FacebookShare to Pinterest
Posted by highway163 at 10:18 AM