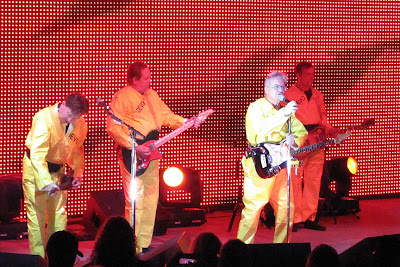 Jenny and I geeked out this past Saturday, driving over the hill to Saratoga's Mountain Winery to see Devo. Just last year, the guys in yellow plastic dropped their first album in a decade: "Something for Everybody," a time-capsule of tunes that manage to blur retro vibes and contemporary angst. The band endured the talkshow circuit and released a couple videos - eg., Don't Shoot (I'm a Man) and Fresh [warning: semi-crappy quality on that latter clip] - but Devo failed to attract the fleeting attention of today's texting-generation. No matter. Jenny and I were thrilled to see a band that's rocked our roadtrip playlist since we were kids. 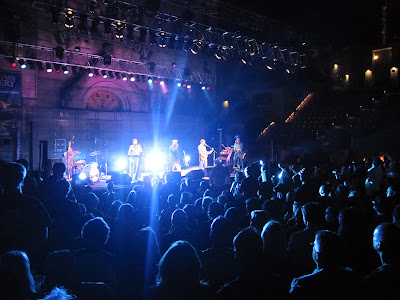 The crowd skewed fortyish (and upward): lots of silver ponytails, SUVs crowding the parking lot, and one scraggly looking dude reading a paperback copy of Dune as the seats began to fill. Not everyone was waiting for their AARP invitations to arrive, though. Jenny and I giggled at the sight of a twentysomething quartet sporting plastic uniforms and matching garrison caps. They marched in fascistic consumer dystopian glee, and we just had to giggle. Oh, and the souvenir shack was doing brisk business in $35 "energy dome" hats. [I settled for a $25 t-shirt and a $10 beer]. We yawned through opening act DJ Real (think Adam Sandberg, but less funny), chilling as yellow lights began to twinkle over the surrounding countryside. And then, there they were.

Now let's get ourselves situated. Two of Devo's founding members - Mark Mothersbaugh and Gerald Casale - are 61 and 63 consecutively. 61 and 63 years old! So you gotta give props to these guys. The band tore through the new stuff with twitchy abandon, popping the tunes open like newly unearthed fallout shelters. The lyrics are fresh but the vibe is classic. Then they played through a catalog of hits, changing costumes every twenty minutes or so. In less than two hours the band dialed the crowd backward from the post-ironic oughts to the pre-Reagan seventies. Not every seat was sold, but no one was sitting for this show. We danced the entire time. And while Jenny and I didn't splurge on center-row tickets, we were perfectly positioned for the highlight of our night: Mark Mothersbaugh careening into our section, jerking pom poms like a spastic spudboy. There were no encores but, heck, the entire show was an encore. We loved it. 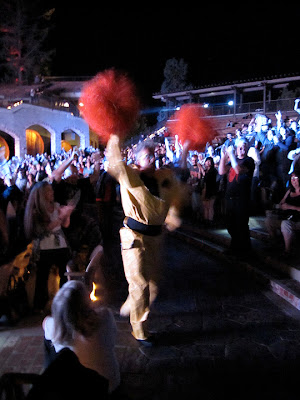 (Photographs by Andrew Wood)
Email ThisBlogThis!Share to TwitterShare to FacebookShare to Pinterest
Posted by highway163 at 10:18 AM

Great write-up of a great show! I had a blast!