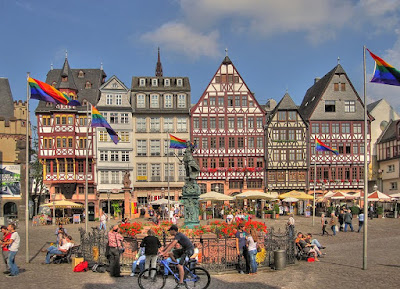 Today was going to be an exciting day for me. As a brief background, if you’ve known me a while you know that in 2007 I travelled with my company, Seagate, to New Zealand for a team-building adventure race: four days of training on bikes, orienteering, repelling and rowing and then a day for our team to race against 20 or so other teams through the wilderness. It was one of the most amazing experiences of my life. But when it was over, I didn’t think I’d ever see some of my teammates again. They were four guys from around the world: one from Milpitas, California so I have seen him a couple of times at employee meetings, one from Colorado who we actually met up with once in Miami when we happened to be there at the same time, one from Singapore and one from Ireland, though he is actually a German now living in (drum roll please) Frankfurt! Yes I actually put Frankfurt on the itinerary so that I could see my old teammate, Torsten and I was quite giddy with anticipation. But he and his family were not available until the evening, so we spent the day exploring more of Frankfurt since we didn’t get to see much the night before. 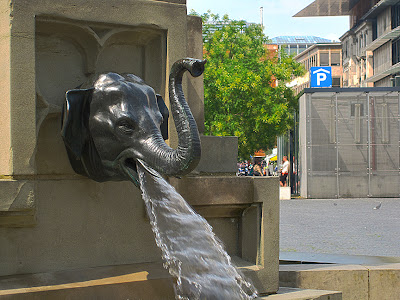 Also because we’d been on the road for a week already it was time for some laundry. The nearest Laundromat was about one kilometer away, or about .62 miles to you and me. We took the U-bahn to keep things simple. The laundromat itself was an interesting adventure. Not only was it all in German but you’re expected to select your washer and dryer, and pay at a central station on the wall (not at the machine itself). So it took us a few minutes of studying, guessing, and putting the puzzle together to figure out how to make one of the machines run. But we conquered it and felt pretty good about ourselves afterward. Once the clothes were in and we verified that water was actually pouring into the machine we were free to roam the streets - well, for 40 minutes anyway, until the cycle was over.

We were in a shopping district on Zeil street, and as we walked we saw malls and markets along the way. In one stall of an open market, we saw some men cooking sausages, all laid out on a big round grill hanging by three chains. The men were swinging the grill across a fire pit, presumably to cook the sausages evenly. It was pretty neat. Once the wash was done and dry, we stopped back at the hotel to pack, shower, and check out. We still had all afternoon to explore. 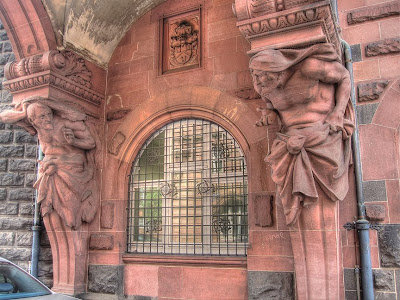 Just a block or two away from our hotel was the old town square that had been destroyed in the war. Romerberg, as it’s called, has been restored and has amazing old architecture that looks like new. Andy’s main goal of the day was to get a good picture of the buildings in this square, which turned out to be no easy feat. For one, the sun was in and out of the clouds all day so sometimes we’d have good light and sometimes not. Usually not, actually. Secondly, there were quite a few more people in the square than during the previous night, so composing a shot that didn’t involve people dominating the picture was difficult. We returned to the square several times, each with varying results. Finally, later in the afternoon, the clouds cleared away enough that Andy had a good window of opportunity to get his shot. 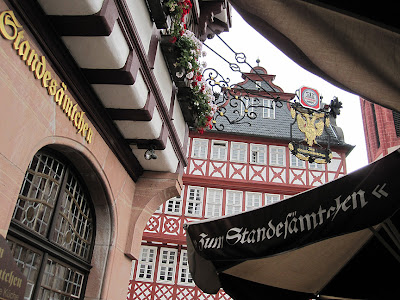 One of our stops during the day was Paulskirche, a church located about a block from Romerberg with a long history as both a religious edifice and a political one, where parliament was actually held at one point. Many important decisions in Germany’s history were made there. Paulskirche was ravaged by wartime bombings and fire, but afterward the mayor rallied the city to restore it as a memorial. Now it has been redone, with displays and a video on its history, a circular mural right in the middle of the main floor, and a bright, airy upper room that contains a lovely pipe organ. It was an interesting history lesson for us.

After Paulskirche it began to rain - and it wasn’t the light California rain we’re used to. It was more like the heavy thundershower type we had in Florida growing up. We ducked under the umbrellas of one of the pubs in Romerberg and had lunch: sausage and sauerkraut for me, again! I love that stuff. But, here’s the other edge of the sword of the orderliness and rule-following that we love about Germany. I asked if I could have half sauerkraut and half potato salad (a request that is usually accommodated here in the states) and I got a stern “no, no.” OK, no changes to the menu. I get it. Luckily, the rain didn’t last long and we were on our way again after lunch. 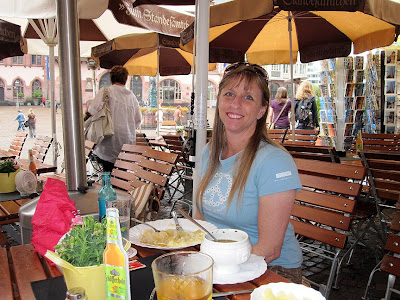 We wandered around for a while longer, saw a giant Euro symbol, kept trying to take pictures of the Romerberg square, found some open markets and narrow alleyways to enjoy, and stopped for a quick refreshment. Here, I got another dose of that double-edged sword. Andy got a cappuccino type drink with a lovely cube of dark chocolate on a stick for stirring. The chocolate was very tasty, and since I don’t drink coffee I asked the waitress if I could get just the chocolate. “No, no, no” was her reply before she walked away. OK, I have to learn my lesson better, I guess. Oh, and the Germans hate it when you order tap water, even if you’re getting a big meal. They want to sell you a bottle are are delighted to charge a premium if you’re the slightest bit vague about your preferences. When I am clear that I merely want tap water, I get dismissive glances. Oh well, I want what I want. 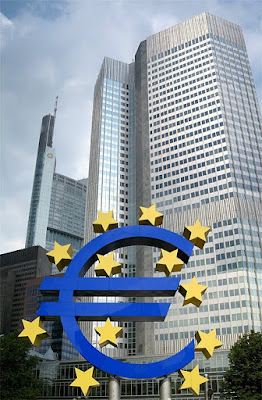 Late in the afternoon we went to see the Dom, which is one of the few cathedrals around in this largely Protestant country. It was a real treat. The inside was quite ornate like most cathedrals, and it had the most interesting pipe organ. Some of the pipes stuck out and curved outward to look like a couple of waves next to the vertical ones. It was very cool looking. The organist played interesting music, though most of it didn’t sound religious (and sometimes it didn't sound like music at all). It was more dirge-like, a conglomeration of dark sounding chords. But his playing revealed another set of pipes away from the main set. This was a bit surprising and lent well to the coolness factor of the whole organ. How many of you get turned on by pipe organs? I’m betting a least a couple!

Finally it was time to go and meet Torsten and his family. We waited patiently at the end of the iron bridge called Eiserner Steg. Then I saw him bounding up in a green t-shirt to give me a big hug. What a thrill to see someone I never thought I would again. It’s kind of like magic in a way, but then in another way I felt like it was meant to be. Have you ever experienced that? His little girl, Maya, came running up behind him. She is two and a half, adorable and so full of energy! Torsten’s girlfriend (Maya’s mom), Layla, came up after with the stroller. It was wonderful to meet her and introduce them all to Andy. Pleasantries done, we walked across the bridge together and sat down at a nearby restaurant on a boat for a quick refreshment. While the adults chatted, Maya explored, ran away as much as Layla would let her and played with her tiny stuffed dogs. She had three of them. Though each wore different colored hats, they were otherwise indistinguishable; she’d named them all “Jasper” – so cute! Maya sat on my lap for a while and we played with her stuffies while I half-paid attention to the conversation. Years of multitasking at work pay off! 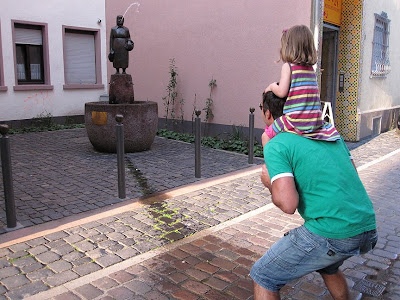 Torsten and Layla then took us to their neighborhood, a short walk along the river. We saw ducks, geese, and swans, and Layla showed us a nearby island that serves as a bird sanctuary. Maya insisted on feeding the birds, so we took a few minutes to throw bits of bread out to them. Torsten then carried her on his shoulders as we moved on. In their neighborhood, Torsten and Layla found us a great authentic German restaurant where everyone sits outside at long tables to enjoy sausages, cured pork, pig knuckles, and sauerkraut. It was a great place with wonderful food (I had the schnitzel). Torsten and Andy got along famously. Of course, I knew they would get along as great drinking buddies. Torsten recommended biers and Andy drank them. It was a winning combination. Maya was a constant bundle of energy. She had too much to do to sit still. A gentleman pointed out a playground across the street, so we took turns taking her over for a few minutes at a time. Otherwise, we talked and ate and drank and had a great time.

Later on, Torsten walked with us back to our hotel to get our bags and help us decipher our train ticket while Layla took Maya home. Once we discovered we didn’t need to be to the train station until 1:00 am, and since the train station was right next to their apartment, we had extra time to hit a pub for some more conversation. This time the boys ordered apfelwein, a cider for which Frankfurt is famous. Then Torsten mentioned his bottle of LaPhroaig back at the apartment. Great. That’s Andy’s new favorite spirit, since he discovered it in Scotland. Torsten insisted on taking us back to his place so Andy could enjoy one last small drink. So while I worried about getting to the station on time, Torsten and Andy got more and more relaxed. Torsten would look out off of his terrace to see if our train was on the track, reassuring me that since it wasn’t there, we had nothing to worry about. I trusted him - mostly.

Finally and unfortunately the night had to come to an end. Torsten walked us to the station and made sure we got to the right place, and then we said our goodbyes. I don’t know if I will get to see him again, but I’m so grateful for the wonderful opportunity I had to see him and meet his family. Plus, if they ever come out to California, he knows we have a place for them to stay. Andy and I got to the train just fine and into our sleeper cabin. Andy was, of course, out like a light in a couple of minutes. I lay awake a while longer, remembering the wonderful times we just had with our friends in Frankfurt. I absolutely love seeing friends and this is now my favorite part of the trip (sorry bagpiper). Tomorrow we will be in Prague, Czech Republic, starting a new day and a new adventure!


Day 6 | Day 8
Email ThisBlogThis!Share to TwitterShare to FacebookShare to Pinterest
Posted by highway163 at 8:51 PM