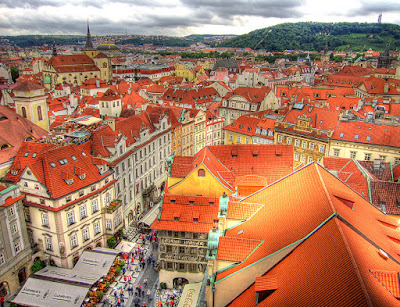 Our second day in Prague and as soon as we get out of the hotel we know it will be a better day than yesterday. With the sky still grey but with less rain, we can walk without the use of umbrellas. I can appreciate this gorgeous city a whole lot more when I can look up and see things! And did I mention I love the night trains? Go to sleep and then wake up in a new place! And what a time saver! We have two full days in Prague with just one night because we didn’t have to use our days for travel. I love it!

We did so much today I don’t know where to begin. I guess I should start with the mundane; we got a new camera. It had to be done because there’s no way we could go the rest of this trip without it. But it seems like every two years we have to buy a new camera on a trip. I know we’ve done it at least three times. But it’s worth it so we can save our memories. Plus, it wasn’t that arduous. We researched a bit last night and then got a Canon PowerShot (the European version, at least). It seems to work just fine for what we need.

The fun stuff began with climbing the tower at the Old Town Hall in the square. This is the tower with the astronomical clock, and it has an amazing view of the city. You can see all the way to the castle and the Petrin Tower, with all those lovely red roofs speckled with towers and cathedrals along the way. While we were up there, the hour passed, and not only did the clocks go off below but a trumpeter came out and played the traditional tune that is played every hour. I grew to love that sound. I came to dread it too, as it meant another hour past. But it’s always a lot of fun to hear the trumpeter and see his red and yellow flag-like sleeve wave in the air when he’s done. There are lots of neat traditions that they carry on these days. Another one is the uniformed guards at the Charles Bridge towers and at the castle. It’s like going back in time. 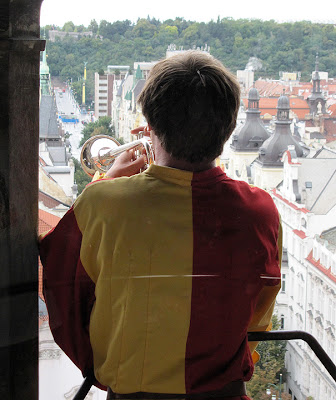 We made our way to the Charles Bridge, always stopping along the way to look at shops or take pictures of whatever caught our fancy. We finally began to know our way through the streets that wind around closely packed buildings. But every street is charming, with cobblestones and beautiful old architecture, so even when we get lost, it’s OK because we enjoyed everything we saw around us. We found a spot just south of the bridge that juts out into the river, which allowed us a great shot of the bridge and castle: a great view for self-portraits. 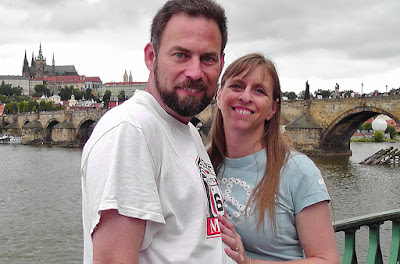 On the other side of the bridge we found the John Lennon memorial wall. We’re not sure why there is a John Lennon memorial wall in Prague, but I suppose it’s because he did some cool things here or lived here at some point. Anyway, it is a living monument where people come along and paint or write whatever they want in remembrance of the beloved Beatle. Unfortunately, the message has degenerated over the years as other kinds of graffiti often obscure the original message. Who knows? Maybe that was the original intention and John Lennon wouldn’t have minded. It was a pretty neat thing to see, anyway. 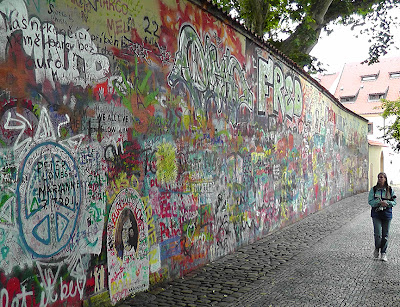 A block or two away was another interesting cultural piece: an iron fence covered with locks. Again, we couldn’t figure out the purpose of this site, but we loved the idea of people adding to the artwork by donating locks. Throughout our trip we saw other similar collections. I think I overheard someone say that lovers lock their promises at these places. How romantic! 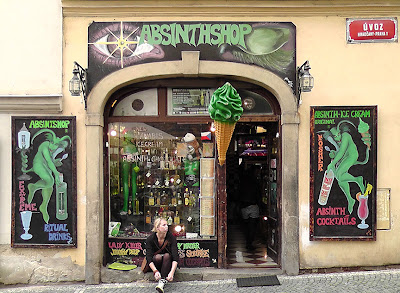 Our next wanderings led us through the “Lesser Town," up the steep hills toward the castle. The walk was a bit arduous, but we knew it would be worth it. We headed to the Strahov Monastery. I had seen some pictures of the chapel here, and it is gorgeous, so we thought we’d give it a try. It was a bit disappointing, though, because we paid about $3 for each of our tickets but didn’t find out until the end that we weren’t allowed to even go into the chapel. We saw several other beautiful rooms, some with paintings on the ceilings and ornate pulpits, even a funeral casket. Sorry, we often couldn’t read the descriptions, since they were in Czech. We did get to peer into the chapel from an outside door with windows, but we couldn’t really see much. 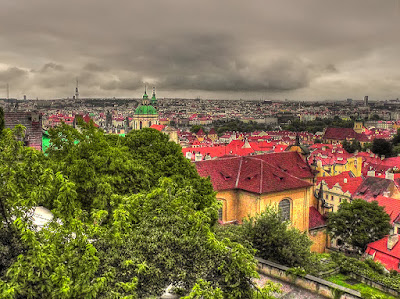 Afterward, on our way to the castle, we stopped for a quick lunch and encountered another stern waiter. This one just outright said that he had no tap water. Yeah, right. No matter, the castle was stunning! We started by seeing some gorgeous views of the whole city from the hilltop. The castle gate had two motionless guards in light-blue uniforms, one on each side. Once you walked through the gate, you were standing at the foot of a huge cathedral with ornate details. We could go into the cathedral, but we didn’t feel like paying for pricey tickets. Pictures from the back were fine with us. It was stunning enough from there. Stained-glass windows in mosaic styles showed the twelve apostles. Vaulted ceilings drew our eyes upward, and the pulpit was magnificent, even from a distance. We took our photos, but they wouldn’t allow Andy to use his tripod, which is typical for these places. 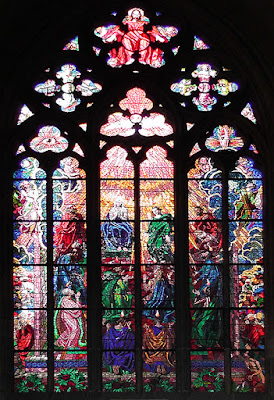 Outside we walked around the cathedral. We couldn’t learn much about the details, but it was lovely all the same. From one point, on our way out of the complex, we looked down again at the city. Not far from the castle, but at the bottom of the big hill, we saw a place that was all black and looked burned out. We decided that when we got down we’d look for that spot, and we’re glad we did.

We walked down the old castle stairs. There are also the newer castle stairs, but these seemed a better idea. We found our way to the building that was surrounded by a wall. Before too long we spotted a doorway. To our surprise, there was no entrance fee, so we just walked in to discover a beautiful garden. There was a lovely pool of water and hedges that formed pathways toward that burned-out area. On our walk through, we spotted a white peacock with her two chicks: a gorgeous bird with a crown of feathers on her head and the two chicks sticking close to her all the time. We got a bit sidetracked from our objective. We loved watching those peacocks. 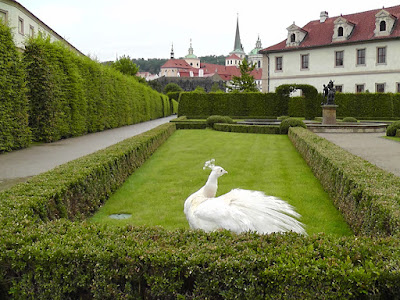 Getting back on track, we meandered through the hedges to a back garden area in front of a large building marked “Senate.” Oh, so this was where the Senate meets, which kind of explains why the gardens were free. And just beyond the Senate building, we found the spot we’d been looking for. Only it wasn’t a burned-out building. It was actually part of the garden, and the black stuff we thought was charred remains was actually an artificial rock wall. It looked like it had been melted and dripped on. It had stalactites of dripping rock mingled with greenery and flowers. The placard said that it was meant to convey a blurring of artificial and natural elements. And that there were faces of monsters mixed into the rock to add a sense of mystery. We had to look hard, but we finally saw those creepy faces in the wall. What a creative addition to the garden! Nearby, owls kept a close eye on us from a large cage. And not far away, an alcove leading up to a building contained gorgeous paintings that hung form the ceiling. We were glad that we were led to this beautiful garden. 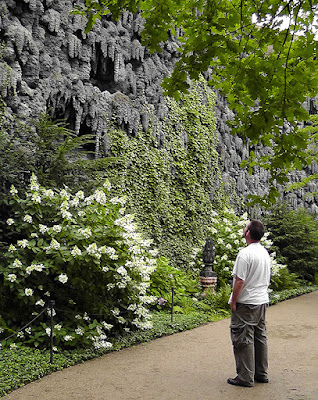 On our way back to the Charles Bridge, we found a spot by the river where we could photograph that romantic walkway from another angle. Not far from there was a real treat: a Franz Kafka museum. Though we didn’t go in, we were able to see the interesting sculpture in the courtyard of two naked men peeing. Yeah, it’s pretty much exactly what you expect, except the men were green with stripes, like they were created with layers. Andy, of course, was enthralled and made a video of it from several angles.


On the other end of the Bridge, just as we were about to come off of it, we heard music and saw people lined up looking over the edge. Well, of course we had to investigate! Though it was hard to see over the people, we caught a glimpse of two ballet dancers on a travelling boat stage who were practicing their art before a group of enthralled tourists. Andy found a good spot from which to see, so we stayed and watched for a few minutes. I love finding musical performances spontaneously, especially such beautiful ones. It’s these kinds of things that add the magic to each city. 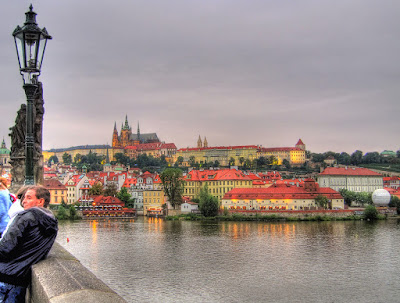 We made our way back to the old town square to pick up our camera and get some dinner. We wanted to try the little stands selling ham on spits and sausage over the open fire. It just looked good and we thought it must be a bit cheaper than other places. Well it was tasty but not cheaper. Still, we got our fill of great food and then got some chocolate from a nearby shop. Really we were just waiting for the town hall clock to chime again. I wanted to get some good footage of the twelve apostles that circle two by two from tiny little doors every hour. This time was much better than yesterday because there wasn’t a bunch of umbrellas in the way. Andy got some great footage and, once more, we saw that wonderful trumpeter. 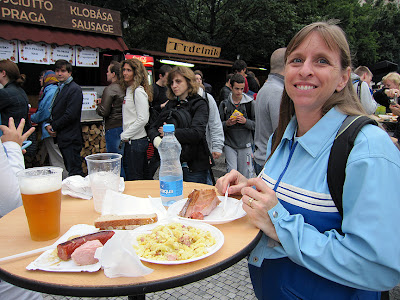 The last thing I wanted to do in Prague before getting on our night train was to get a good picture of the Charles Bridge and the castle at night, all lit up. So we took one more walk. While we waited for the darkness to come, we heard more music coming from the stage on the river. There was a lovely soprano opera singer performing a beautiful piece. Right afterward we saw another ballet couple performing something a bit more edgy (I could tell from the style of the woman’s red dress). I know these weren’t spontaneous shows, but I loved them anyway. We did capture some beautiful shots and then it was time to go. We knew we would miss this lovely city, and we wanted to preserve our memories. 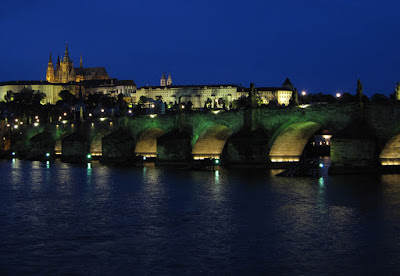 From here, we took our first underground back to our hotel, grabbed our bags, and got right back on the metro. Our goal was the train station at the other side of town. Of course we were there a bit early so spent some time writing and editing photos. The train came right on time and we grabbed our sleeper cabin and got ready for bed. But the next thing we noticed was that we were stopping in the train station near our hotel. Shoot! That meant that we could have spent about another hour out in the city instead of going all over town and waiting at the first station. Well, there was nothing we could do about it, so we settled in for a good night’s sleep. Tomorrow we hit Budapest, Hungary. Another new city, another new undiscovered country!


Day 8 | Day 10
Email ThisBlogThis!Share to TwitterShare to FacebookShare to Pinterest
Posted by highway163 at 8:55 PM