We woke up an hour before pulling into the Prague station, with just enough time to organize our gear and freshen up. Splurging on a private compartment on a night train may be bad for our budget, but I surely loved the quiet and privacy of the trip. Best of all, we'd traveled plenty of miles without losing an opportunity to spend all day in a city about which I knew almost nothing. Our only disappointment was the drizzle that drifted down from grey skies. At least our hotel was near by, a block away from the station. And the manager let us have a room, though we arrived at around nine in the morning. Right away we opened our laptops to gloriously free wifi, looked up a few Czech phrases, and picked a path to the Old Town. 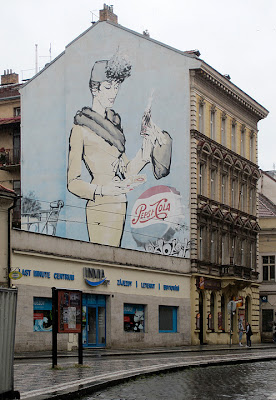 Now if you've read this far you'll note that we use that phrase to describe the premodern center of a town where stone walls and narrow alleys typically surround a square a cathedral and other religious sites. That's what I expected from Prague. And since Jenny and I had crossed a facsimile of Charles Bridge at the 2010 World's Fair, I added that item to our itinerary as well. Otherwise I had no clue what to expect. What we found: block after block of centuries-old buildings, winding cobblestone streets, and cheery outdoor cafes. We'd turn one corner and see something even more beautiful: marionettes on display, folk dancers in the central square, hidden walkways that formed interior passages, flag draped battlements marking garrison edges, and stone castles set atop distant hills. 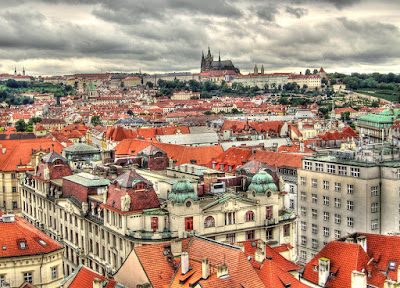 Before long we joined a crowd waiting under the astronomical clock, all of us hoisting umbrellas in the light rain. For our patience we were rewarded with animatronic apostles that rotated above us. To mark the time, a trumpeter in medieval costume played triumphant notes that echoed across town. I felt sorry for patrons of a restaurant behind us, though. The advertisement for Great View of Astronomical Clock likely didn't forecast the presence of thronging tourists standing in front of the tables to snap photos. 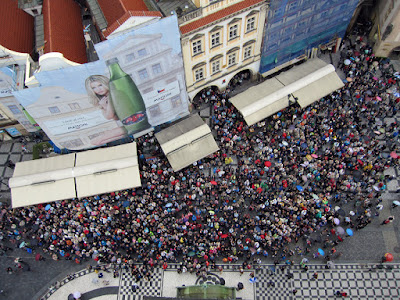 We sat down for a tasty lunch at a nearby cafe. Our waiter took one look at our white socks and Jenny's preference for tap water and treated us with disdain. Jenny made no friends in the restaurant's WC, either, especially after asking why we should pay to pee after already committing to buy a pricey lunch there. We'd miscalculated the exchange rate between dollars and koruna, and we dreaded the final cost of our meal. Later on we'd find that the cost of sustenance in Prague is not quite as awful as we initially suspected. It's merely insane. 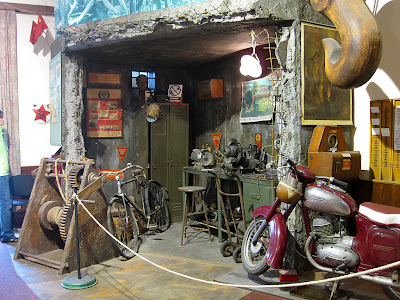 I'd seen signs for something called the Museum of Communism; the image of a sweet Russian nesting doll baring fangs caught my attention. Jenny agreed that any indoor activity would offer a nice diversion from the rain, so off we went in search of the place. As many other visitors have noted, there is a certain irony in the placement of a museum dedicated to the Czech Republic's communist era: near a casino and above a McDonalds. Nonetheless the site is worthwhile, featuring a mocked-up classroom where a red kerchief-wearing girl is reciting some koan of Marxist dogma, an industrial workplace where the New Socialist Man is reminded that "Timely Arrival to Work Deals the Decisive Strive Against the American Aggressors!" and a bleak interrogation office where a desk lamp shines into the eyes of anyone unlucky enough to be dragged within. After a film commemorating the violence, upheaval, and courage that led to the events of 1989 the museum concludes with a walk along an ersatz Berlin Wall. 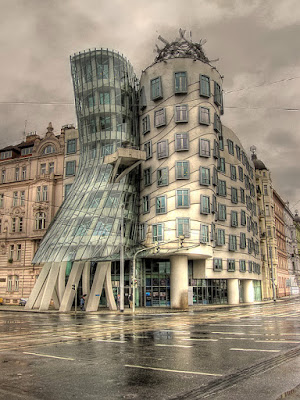 Later on we made a pilgrimage to the "Ginger and Fred" building, also known as the Nationale-Nederlanden building. In classes where I introduce postmodern architecture to my students, this is a go-to image. At the same time I've always felt a bit strange discussing a place I'd never seen personally. It was therefore a special treat to make our way toward the river's edge and see it for real. From there we followed narrow streets in search of spray art (a guilty pleasure of mine) and a restaurant called the Iron Curtain. I heard the owner had fashioned a clever retro-Communist enclave there. The place could easily be called The Dungeon, because the restaurant is built in a dark, almost cave-like, underground set of rooms. The ambiance is somehow perfect, with paintings of Mikhail Gorbachev competing with Maggie Thatcher, and a collection of Soviet-era posters that calls to mind the creepy optimism of a future that is now abandoned on history's ash heap. The food was pretty terrific too, especially for the uncharacteristically reasonable cost. 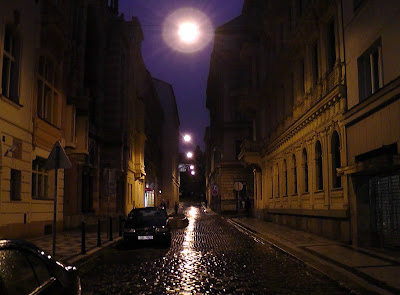 The weather continued to coat the city with a depressing pallor, a feeling intensified by the growing realization that our travel camera had ceased emitting occasionally quirky noises when the lens was extended and had finally died. Here we are, I thought, in freaking Prague, and our camera has gone kaput. I remembered a similar crisis in the Australian outback when we had to settle for a cheap plastic film replacement after another camera bit the dust [literally - One sharp gust knocked our tripod to the ground and we were without a means to take pictures of the amazing places we were seeing]. Hell, we had to replace a much more expensive camera just two years ago after a similar bit of bad luck! Somehow we regularly manage to offend the travel gods. Fortunately Prague abounds with tourist conveniences, including two camera shops across the same road. The next day, we decided, we would pay the price and get a decent travel camera for the rest of our trip. And who cares about a little rain?


Day 7 | Day 9
Email ThisBlogThis!Share to TwitterShare to FacebookShare to Pinterest
Posted by highway163 at 7:36 PM