Sleeping in: such pleasure, such rarity! But today we splurged and allowed the morning to drift by for two hours. And why not? Aside from plans to visit Miniature Wonderland - the purpose for adding Hamburg to our itinerary - we had no specific agenda for this town. Nonetheless, Jenny and I agreed that we'd stumbled onto a lovely place. A working place, yes, with plenty of construction projects and a palpable sense that architecture must first be functional before it can be beautiful, but also an undeniably delightful place to walk. We bought a day pass for the U-Bahn, knowing that no one would check to see that we paid. What a difference from London, when every coming and going requires some queue to pass through a ticketing barrier. Jenny added to our reflections on the town by commenting how much she loves the German appreciation for punctuality.

I could therefore hardly be surprised to find at the Miniature Wonderland a long line to enter, counterbalanced by "fast pass" tickets for reserved times later in the afternoon. While I dreaded the prospect of shifting our visit so near our planned departure, I couldn't imagine an alternative. So we snapped up two early afternoon reservations and commenced to wandering the town some more. Aimlessly we crossed canal after canal and ambled as our instincts led us. Whatever caught our eyes - a sculpture, an outdoor market, or an interesting piece of architecture: that's where we'd direct our feet. 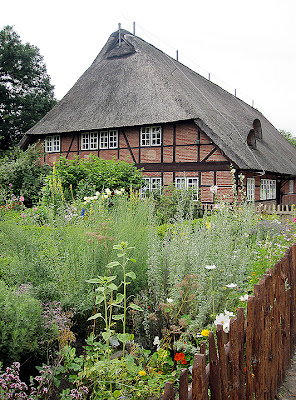 A couple hours later, though, we both were ready for a break. That's when I realized we'd paid for day passes and were hardly using them. I looked at the map and noticed a museum in a nearby suburb, Volksdorf, that appeared to showcase German rural life. Jenny was game and, about a half hour later, we were there. As much as we enjoy Hamburg, the difference between a relatively big city and this small village provided a calming respite. Figuring on the time it'd take to return, we estimated a window of only about 20 minutes to enjoy this place. Fortunately we had no difficulty finding the museum, which offers free admittance to folks who merely want to walk around the grounds. We loved our visit. 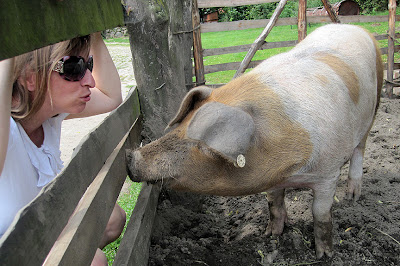 Our final stop was Miniature Wonderland, a fascinating collection of tiny worlds with blinking, moving, storytelling versions of places whose actual expanse exceeds the singular gaze. The place was packed with camera wielding folks jockeying for position to take snapshots - especially of the new airport with traffic-jammed departure roads, moving fuel trucks, and jets arriving and landing every few minutes. Best of all, like any great miniature attraction, lights dimmed and brightened to produce the effect of night and day. We stayed as long as we could, determined not to miss our train for Frankfurt, yet I am sure we could have wandered those cramped walkways all day and never discovered every little visual gag or clever depiction of everyday life, both simple and fantastic.


The minutes ticking away before our departure, we walked along the waterfront to a metro station. We'd grown comfortably accustomed to the efficiency and speed of the trains that whisked us through the city. After finding our hotel to grab our bags, we tramped back to the underground and then to the train station. There we snarfed down yet another meal of sausages and potato salad before boarding our train. Our bags were growing tighter as our collection of souvenirs continued to grow. At the same time we both felt more connected to each zipper pocket and hidden compartment, having spent so much time living out of our luggage. Traveling experts will tell you that "If it's Tuesday, it must be Belgium"-type tourism is a shoddy way to see the world. Heck, I'd agree. But Jenny and I love the newness of our experiences, where every day brims with fresh delight. Thus a little more than three hours later we found ourselves bumping along the cobblestones of Frankfurt's medieval center. Our hotel was merely a block away and we had a new place to discover.


Day 5 | Day 7
Email ThisBlogThis!Share to TwitterShare to FacebookShare to Pinterest
Posted by highway163 at 7:31 PM