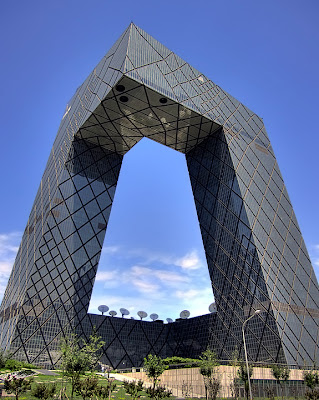 Our third week in China, and SJSU students have clearly become confident in their mastery of the complexities of big city transportation, even as they've survived their wanderings through some dense course material. Class began with student summaries of their weekend activities, including stories shared by our two nomads who spent 48 hours in Shanghai. I was glad to hear of their adventures, but mostly I was thrilled that they made it back to us!

After our initial weekend "show and tell," we spent some time summarizing key ideas related to panopticism and the flâneur gaze, using those theoretical lenses to read and interpret some of Beijing's practical realities. The conversation got thick mighty quick, particularly when we considered whether premodern, modern, and postmodern culture might reside simultaneously in China.

We could have spent another hour in class, but the weather was simply too nice to stay inside. Those blue skies called us all to hit the metros in search of new experiences. For me, that meant an opportunity to check out Rem Koolhaas's China Central Television Headquarters [More pix here], followed by a trip to Paul Andreu's "Bird's Egg" (a.k.a. the National Centre for the Performing Arts). Studying these outlandish examples of contemporary architecture, I am perpetually awestruck and alarmed. It'll take months to process some of these days.

Day 13 | Day 15
Email ThisBlogThis!Share to TwitterShare to FacebookShare to Pinterest
Posted by highway163 at 11:00 PM