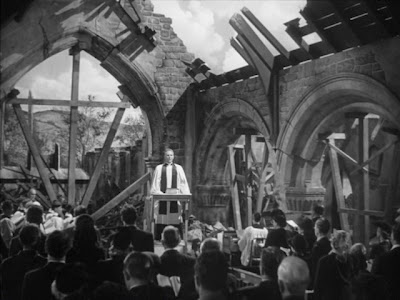 I was thinking about President Bush's recent efforts to compare the Global War on Terrorism with previous American struggles in Vietnam and, of course, World War II. In that spirit, I recently rented Mrs. Miniver (1942). Given my nostalgic penchant for "homefront" movies like The Best Years of Our Lives, it's a little surprising that I waited so long to finally see this movie that helped solidify American resolve during our early involvement in the Second World War (Spoilers, as you might imagine, follow). I had visions of "chip, chip, cheerio" and "stiff upper lips," and consequently I wasn't sure I could take this movie seriously. And it's true that Mrs. Miniver's English villagers are relentlessly cheerful in the face of German bombs. Thus, when the head of the Miniver household finds his home almost destroyed after an air raid, he remarks that he'd wanted to redo the dining room anyway. Precious. Nonetheless, the film's basic humanity and optimism warrants some appreciation.

An underlying theme of Mrs. Miniver is how England's prewar class rigidity gives way to a more genuinely democratic spirit once the "people's war" brings death, destruction, and even German airmen to the tree-lined community. An upper middle class scion promptly joins the RAF and the crusty dowager yields first prize in a rose-breeding contest to the humble train stationmaster. At night, bombs pulverize the ancient village, and all the people, wealthy and poor, huddle in their air raid shelters. You know that some of these folks will perish by film's end, though I was genuinely surprised at one particular fatality. Mrs. Miniver concludes with a rousing chorus of "Onward Christian Soldiers," and audience members were surely reminded to buy war bonds as they left the theater. Beyond class, beyond self-interest, Mrs. Miniver calls forth a kind of patriotism that's hard to imagine today. 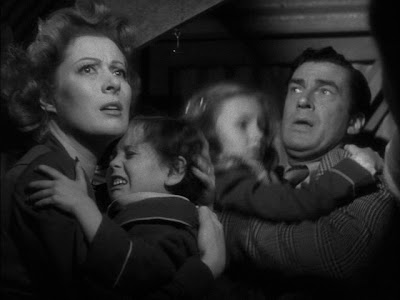 Given that we currently face a war that seems to have no end, struggling with a seemingly implacable enemy who possesses remarkable cruelty, I cannot help but compare our state to that of the Minivers in the early 1940s. If we are indeed caught up in a global struggle against tyranny, it's hard to spot any signs of this war along my own tree-lined road. After 9/11, we all stuck American flags upon our cars and continued supporting oil regimes that help contribute to our miseries. And today, brave volunteers join the ranks of our armed forces, even as thousands of their brothers and sisters have been cut down by bombs and snipers. Yet no one seriously talks of a draft or rationing or any of the other kinds of sacrifice that a real war demands. Watching a movie like Mrs. Miniver reminds me of how hollow the rhetoric of "war" has become.

Perhaps an insufficient number of Americans are willing to buy what the Bush administration is selling. When we hear of no-bid and cost-plus contracts that seem designed to ensure that war profiteers will make their millions despite our losses on the battlefield, and when we see an administration that seems hell-bent on viewing a complex world though a dusty prism of American good confronting non-American evil, many observers can be forgiven for not cheerfully joining the march this time. Even patriots today cannot help but wonder: What kind of war is this?
Email ThisBlogThis!Share to TwitterShare to FacebookShare to Pinterest
Posted by highway163 at 1:44 PM