Aunt Hattie's - Before and After 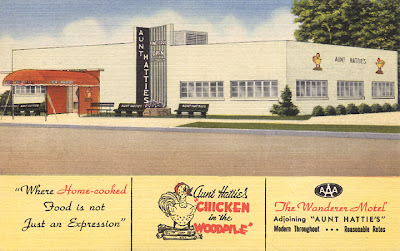 Aunt Hattie's was a St. Petersburg landmark since opening in 1939 as a hamburger joint. By the time my mother made a habit of visiting in the 1970s, Aunt Hattie's had a new building and had expanded to become a pleasant sit-down restaurant known for its toy chest. I remember waiting for my chance to seize a prize after I cleaned my plate. 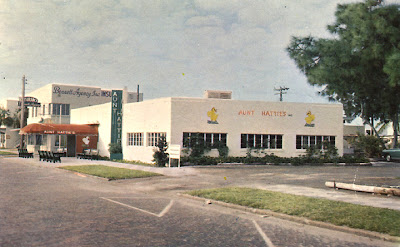 In a St. Petersburg Times article, Elizabeth Whitney recalls: "It was oranges in the foyer free for the taking, the player piano beating out East Side, West Side, hostesses in Gay Nineties garb, the children's treasure chest of free gifts . . . The servings were big; the prices were low." 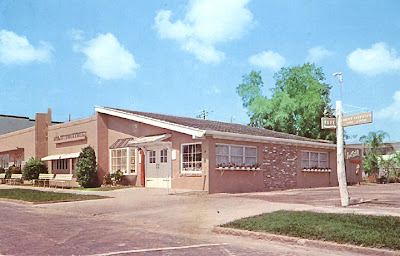 A 1968 postcard reveals a much revamped restaurant, like the rambling building that I remember. Unfortunately, after suffering a rash of problems in the early eighties, including a much-publicized incident involving a dining room rat-attack and flood damage from a hurricane, Aunt Hattie's closed in 1985. 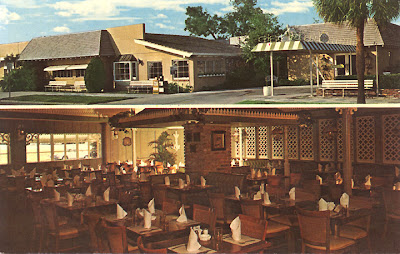 Do you have any memories of Aunt Hattie's? Please leave a comment.
Email ThisBlogThis!Share to TwitterShare to FacebookShare to Pinterest
Posted by highway163 at 12:21 PM

Index Labels: autobiography, before and after, dining, Florida, postcards

Aunt Hatties was first open in 1939 and was basically a burger and chicken joint with no seating and only walk up business. Hattie, left the business, her husband (Ed) and son (Frank) in the very early 40's. Hattie traveled about for many years and passed away in the late 70's. Father and son stayed and built the business into one of the most popular restaurants in Florida and one the nations top 500 grossing (according to R&I magazine) for several years in a row. Ed passed away in the early 60's and in 1970 Frank opened a small 1920's style speak-easy sandwich shop next door and called it Uncle Ed's. He eventually went on to build other locations in Clearwater and Tampa. Frank sold the business in 1979....Frank is still alive today, married to the same woman for almost 60 years and dealing in antiques...his second love ...which is obvious to anyone who has ever visted any of the restaurants.

What a useful and detailed post, David! Thanks so much. I learned a lot, and I appreciate your time and expertise.

Wow. That last picture brings back some memories.

I remember weaving my way through those tables in a rush to get to the toy chest.

Hi, I'm Richard T. About 1954, I worked at Aunt Hattie's in the desert section. My job was carefully cutting and serving cakes and pies as the waitresses ordered them. Those wonderful deep meringue pies were trickey to cut (clean wet knife) and they always had to look neet. Got real good at it. I only worked part time as I was still going to school. I was around 17 or 18 then. Pay was 75 cents/hour, better that at the Tramor where I had previously worked.

Bruce Boore (my brother and Frank's son) has opened Hattie's Cafe and Beanery in Lutz. While this is a different food concept an includes in house coffee roasting, you'll find many of the old Hattie's photos incorporated in the cafe's theme. Recipes are different but the commitment to quality, value and service are all there. Web address is http://hattiesbeanery.com

My father worked there in the late 50's. Our family moved back to Vermont and then on to California in 1961. My brother's family and I are going to be in Orlando between Nov. 8th and the 15th, might have to come by the new place and look at the pictures. I remember eating in the old restaurant down by the airport and going to the treasure chest, was a lot of fun. Skip Mallory

I have memories of eating lunch in the Clearwater location. My co-worker always had a slice of pie, and I LOVED the waldorf salad. It was the best ever! Wish I had the list of ingredients or recipe.

Loved the chicken and Dumplings and visited frequently as a child.

I found a postcard in my great grandmother’s collection that looks earlier than your posted photos. How do I get this to you? Thanks