Great Movie Endings - Part 4 - The Best Years of Our Lives 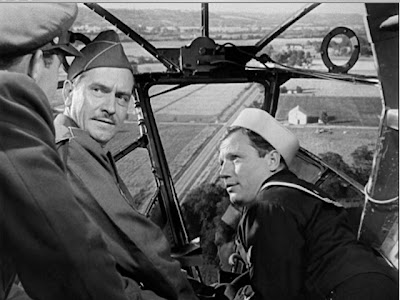 Growing up with a grandfather who served in World War II, I developed an early affection for films that depict everyday life from that era. "War movies" always interested me, but I'm drawn even more powerfully to films that show life on the home front. Sure, "weepies" such as Since You Went Away and The Clock were made to elicit the tears of sentimental moviegoers, but I also enjoy these films for their portrayals of otherwise forgotten details of 1940s-America: the economics, the prejudices, the fashions, the mores, all the tiny details of life that seem so alien to a twenty-first century viewer. Of all these movies, my favorite is The Best Years of Our Lives (1946).

I have seen this movie at least a dozen times, and I never tire of its unflinching account of the personal struggles faced by service-members and their families confronting the difficulties of life once the victory parades have concluded. A cursory view may lead a jaded viewer to reject this movie as a sappy melodrama. And it's true that some moments fail to resonate as they once did. But the film earned its many awards (including seven Oscars) for the honesty of its grand pleasures and small moments. I love a number of scenes. A sergeant holds his wife after spending years apart while his two children look on from a distance. A once-glamorous bombardier wanders among scrapped planes that resemble rows of tombstones. A disabled sailor who finally accepts the love of his hometown sweetheart looks up from his bed, a single tear falling down his cheek. But the movie's best scene is its finale. 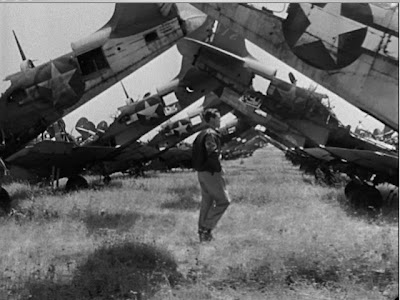 The bombardier, a fellow named Fred Derry, has failed to make much of his life back in Boone City. While he once wore the uniform of an officer, Derry is forced to take his old job as a soda jerk, working for the sniveling kid who once served as his assistant. Fred's two-timing wife complains about his inability to provide the evenings of swanky nightclubs and fancy dresses to which she's become accustomed. She also can't understand why Fred won't just "snap out" of his combat-induced strain, those terrors that startle him awake night after night. He's fallen in love with Peggy Stephenson, a kind and patient young woman who sees beyond his current difficulties, but he convinces Peggy to abandon him, fearing the scandal that an affair would bring. Fred is surrounded by friends but feels hopeless. Eventually he returns home to find his wife with another man, a fellow veteran who seems to have had no difficulty adjusting to life after the war. Fred's marriage collapses and he decides to skip town and set off for new opportunities. Waiting for a flight out of Boone City, Fred climbs once more into one of the bombers he flew during the war, reliving terrifying moments that never seem to leave him. As he reels in despair, feeling like a ghost who belongs among the junked planes, a voice from the ground calls him back; the salvage crew has come to dismantle the plane. Fred talks with the boss, forgetting his self-pity and realizing that he might be able to land a job after all. The scene ends with Fred taking a job as a junkman. It's hardly a glamorous career, but it's an opportunity to dismantle his nightmares once and for all.

The movie has one last moment, though, a final scene that draws a tear every time. Fred has come back to town, employed and growing in confidence, and he's agreed to serve as best man for the sailor who's overcome his own demons and decided marry his high school sweetheart. Peggy has arrived as well, since her father and the sailor are friends. The wedding is simple but poignant. The sailor fumbles his vows in a manner that affirms the deep humanity and honesty of the movie. All the while, Fred and Peggy stare at each other, recognizing that they have never fallen out of love. As the wedding concludes, Peggy seems to glow with a radiance that only Fred can see. They draw toward each other and embrace. Fred warns her of difficult days ahead: "You know what it'll be, don't you, Peggy? It may take us years to get anywhere. We'll have no money, no decent place to live. We'll have to work, get kicked around…" But Peggy simply beams with that radiant smile. She knows, as does the audience, that the "best years" of their lives have only begun. 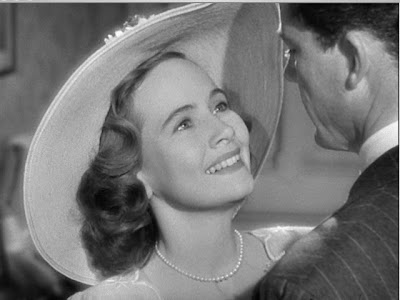 Visit IMDB's post on The Best Years of Our Lives
Email ThisBlogThis!Share to TwitterShare to FacebookShare to Pinterest
Posted by highway163 at 2:45 PM

A beautiful film; one of my favorites. It seems to play regularly on late-night TV nowadays. My husband (probably about 20 years older than you) says "it's a real guy's film." Thanks for writing about it.