This is an artifact-set from the 1939-40 New York World's Fair, a site studied by students of COMM 149F: Rhetoric and Public Life. The images are scanned from the 1939 Official Guide Book, while the text comes from Gilbert Seldes' description of Democracity in Your World of Tomorrow (a booklet, shown below, sold at the Theme Center). Both are from my personal collection. Click the images for a larger view. 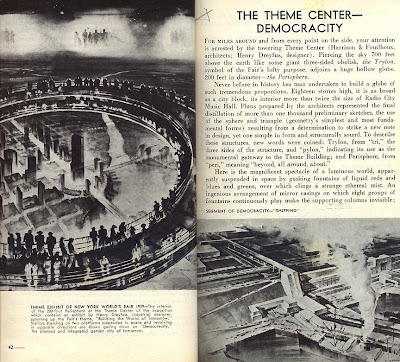 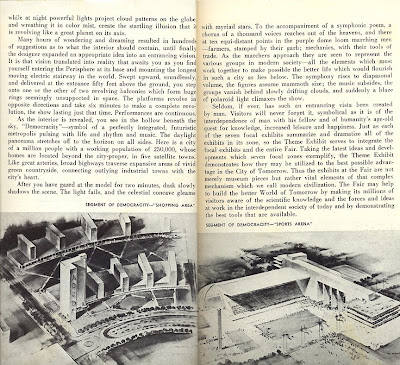 Henry Dreyfuss' Democracity was a popular exhibit that promised a glimpse into the world of 2039. To see Democracity, visitors entered the Perisphere after departing an escalator rising from the adjacent Trylon [see the postcard at the bottom of this post for illustration]. Inside the Perisphere, fairgoers viewed a city diorama from an overhead vantage point upon twin revolving mezzanine balconies. From their god's-eye view, visitors surely recognized the calm and confident voice of beloved radio commentator H.V. (Hans von) Kaltenborn, who explained the scene. While I'm borrowing from booklet text, I can hear him saying these words: "Here it is . . . and we like it. It's attractive and sensible at the same time. It's pleasant because we've spent a lot of money to make it so . . ." As David Gelernter [author of 1939: The Lost World of the Fair] might say, this was the voice of authority. 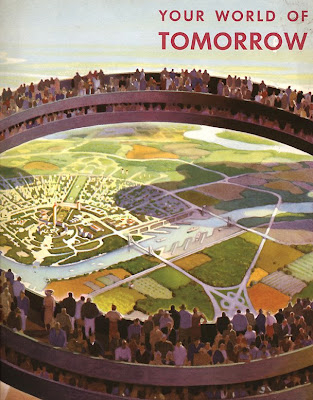 Democracity may not appear all that revolutionary to contemporary viewers, but the exhibit was pretty remarkable to visitors at the 1939-40 NYWF. A central city would be ringed by Pleasantvilles and Millvilles, all surrounded by green parklands. Democracity's future was a profound change from the world of today experienced by its visitors. In this future people would live, work, shop, and play in areas sufficiently distinct from one another to ensure order through proper zoning, even as they would be connected by a system of highways to ensure that no region would be too far from any other [see Democracity being designed]. No longer would cities feel like mazes of teeming humanity; no longer would rural regions seem disconnected from the world around them. The future would be ordered even as the people would be free.

Democracity promised suburbs -- fairly boring, right? Not if you consider this vision from the perspective of its Depression-era visitors. To them, Henry Dreyfuss' future promised to guard civilization itself from the forces that threatened to tear it down: "On one side is the World of Tomorrow, built by millions of free men and woman, independent and interdependent . . . On the other side is chaos . . ." Given that people in 1939 were contemplating the chilling prospect of a second world war, this after a wretched decade of deprivation, one may hardly doubt that they knew the meaning of these words. Still, even as chaos surely resonated with visitors' justified fears of continued economic struggle and military conflict, we may safely assume that they also referred to the kind of chockablock disorder found in cities that allowed all manner of classes to overlap in an expansive and potentially frightening public sphere. That kind of chaos was also manifested within the modern mind in 1939.

The promise of public life was therefore somewhat complex: an attempted balance of freedom and discipline. That's why as the display reached its conclusion a sound and light show depicted the independent and simultaneously interdependent vision of tomorrow, as disparate social groups appeared to merge into one harmonious whole:


"These giant figures . . . with arms linked . . . priest and farmer and miner and housewife . . . sandhogs and baseball players and telephone operators and ministers . . . dairymen and cotton pickers and brakemen and nurses . . . men and women of all nations . . . They are marching in triumph."

After the six minute show, visitors excited the Perisphere and glided back to earth, walking down the sweeping helicline ramp in a clever transition designed to inspire contemplation of Democracity's promise that planners could build the world of tomorrow with the tools of today. 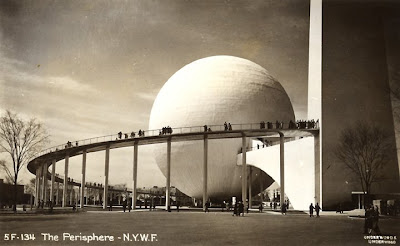 Note: Henry Dreyfuss was sometimes spelled Henry Dreyfus in period publications. Artifacts from Official Guide Book: New York World's Fair (1939, Exposition Publications Inc., New York), 42-45. Quotations from Your World of Tomorrow (1939, Gilbert Seldes, author; Rogers-Kellogg-Stillson, Inc., New York), np. In all quotations, the use of ellipses appeared in the original text. Postcard from my personal collection.
Email ThisBlogThis!Share to TwitterShare to FacebookShare to Pinterest
Posted by highway163 at 6:00 AM