Shelter from the Storm:
An Auto-Ethnography of Fear and Hash Browns 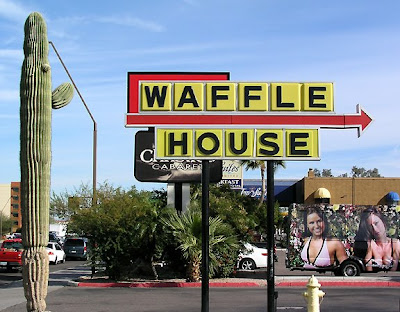 I'm sitting in a Phoenix Waffle House, waiting for the world to end.

I've driven 727 miles one way over a day, alone, to sit here. It turns out that this Waffle House sits in a cluster that is nearest to my home on California's west coast. I figure about eight links to this chain reside in the Phoenix-Mesa-Scottsdale metroplex. A sprawl of limited access freeways and speed cameras, of rock gardens and ornamental cacti, the Phoenix region presents a dense enclave of order when viewed from above, all that stretching, colonizing geometry, all that wheezing air conditioning surrounded by fearsome desert. Waffle House is known for its order too, for its incantation of commands and precise ballet of motions, but it still feels strange being this far from its Southern roots.

I'm a Southerner too, sort of, also far from my roots. I was born in Florida, raised in the suburbs of Pinellas County, which is a gigantic parking lot when compared to the Everglades further south or the one-stoplight towns north of I-4. In fact, I didn't discover my Southernness, my tendency toward a drawling y'all and my deeply instilled sense of "place," until I left my home state after high school. In a similar way, I never really thought much about Waffle House as a southern institution until I found myself far from home, a faculty member at a California university where many folks have never heard of the chain.

I'm asked, "Is Waffle House like International House of Pancakes?" Yeah, just about as much as Pepsi is interchangeable with Coke. A Southern institution (and IHOP, if you're curious, is a Los Angeles area fabrication) contains a subtle but distinct set of rules about decorum and design, and it most definitely offers sweet tea, a delicacy I'd never recognized as such until I left home. Even in an era of globalization and homogenization, a world whose primary metaphor may be the international shipping container, the South means something distinct to the American imagination. The South remains an enclave, safely and necessarily apart from all that surrounds it.

So here I am, a transplanted Californian sitting in Phoenix after a 15 hour drive -- it should have been 12, but a Siberian blast of snow and ice, even in the Mojave desert, was both extraordinary and thought-provoking: better slow than dead on the road. I've driven a long way to think about Waffle House as a safe space against a surrounding world that seems frightening. Fresh memories of terrorists laying siege in Mumbai, dawning threats of war in the Middle East, and global fears of an economic collapse so vast and intricate, so perfectly total and mindbendingly grand, that serious-minded people are called forth to remind us again and again that, no, we're not drifting toward a Depression (repeatedly enough to panic us into imagining that, yes, we are drifting toward a Depression): these thoughts troubled me enough to seek a redoubt from all that random violence and ominous danger. The world is ending, the time we once knew, and this spot so far from home seems like the appropriate place to wait for what comes next.

I'm here in a Phoenix Waffle House, writing about fear. That is to say that I've chosen to write about how places like Waffle House (how rare and necessary they are these days) serve up enclaves from the outside and the unknown, particularly as they perpetuate the possibility for us to order places and relationships as we would order our meals, a performance of ritual and community that resembles that we would call real, even while it is usefully, therapeutically, unreal. Assuming a perspective that is somehow broader yet simultaneously much more narrow, I have also chosen to write about the way in which some academic writing may benefit from a method of auto-ethnography, a kind of drive-by scholarship that reveals the role of fear that animates so much of academic life, whether on the road to Waffle House or the road to tenure.

While I claim no particular "ownership" of this play on words, I would offer my own interpretation, emphasizing that auto-ethnography ought not be confused with autoethnography, the method of qualitative analysis that calls for a profound and time-consuming encounter between the author and a site or community (generally with the author her/his self providing a primary lens of inquiry). Auto-ethnography demands the fast moving gaze of the long distance driver, a means to catch quick meaning from blurring signs, reading the road as flow rather than stasis. Auto-ethnography requires a peculiar vigilance borne of imminence, a sense of threat that yields the clarity of perpetual now. It is a position that is never fixed, one that milks the risk of staying anywhere too long. Indeed, auto-ethnography is most aptly employed when unpacking the complimentary reality of fear and safety, a desire to be here and not-here at the same time.

In this essay, I will try to tell a useful story about Waffle House from an auto-ethnographic perspective, even as I tell some stories about how I came to write this piece. I will generally tell the truth, though I will lie a little bit, too. After all, whether studying the creation of hash browns or the mashing together of scholarly prose, too much honesty can be a dangerous thing.