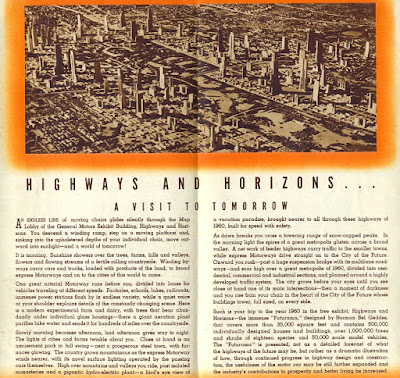 This is an artifact from the 1939-40 New York World's Fair: a recollection of General Motors' utopian promise of better living through transportation, which is a common topic in a couple of my classes. This pamphlet (from my personal collection - click image for larger view) illustrates a number of themes common to that world's fair. My favorite theme is the rhetorical construction, if not fetishization, of "the expert" in public life.

Reading the text, we see how planners will build the future; the people need merely accept the experts' designs. Thus, "you descend [into a moving car that carries you past a diorama of 1960s-era highway design] . . . sinking into the upholstered depths." One imagines feeling almost infantile in trust, accepting of forces so far beyond comprehension. A useful but incomplete parallel between that experience and contemporary life may be found in movie theaters, those devices that seek to (almost) perfectly focus our senses toward one singular frame.

Feeling lost or disoriented? Even a moving car with no detours can frighten folks who are unfamiliar with the future. Have no fear: "a quiet voice at your shoulder explains details." That voice is the voice of authority (so astutely articulated by David Gelernter's 1939: Lost World of the Fair). Gelernter vividly explains how submission to the ordered plans of the experts offers us a glimpse, a "bird's eye view," of tomorrow (of course we know who the gods are of this future; we'll settle to be birds among their heavens).

Then you depart the Futurama and its vast depiction of the world of 1960, slipping the bonds of the present, but for real this time: ". . . a moment of darkness and you rise from your chair in the heart of the City of the Future whose buildings tower, full sized, on every side." What a scene, to blink away the shadows and stand within the promise of a world long after the Depression, long past the threatening clouds of imminent war.

I long for that glimpse, that flash of possibility that cuts through the threshold of today and bridges toward tomorrow. My tiny "I have seen the future" button, the one I wear on special days when I'm sharing the Fair with my students, is an artifact, one of William Gibson's semiotic ghosts. But it will never fully allow me entrance to that moment that drew queues of visitors to the 1939-40 New York World's Fair, a place and time that inspired people to stand in line for hours, waiting for a common tomorrow that seemed so good, so near, so possible. I so wish I could have stood among them.

Artifact from pamphlet entitled The General Motors Exhibit Building (1939, General Motors Corp.), np.
Email ThisBlogThis!Share to TwitterShare to FacebookShare to Pinterest
Posted by highway163 at 12:01 AM