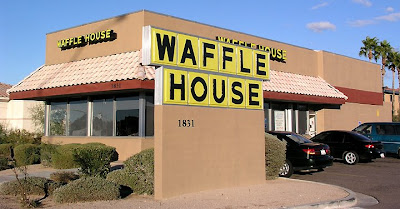 I wonder if Waffle House reflects a node of omnitopia. Or perhaps does it represent something more meaningful?...

The coffee is poured and the laptop is on the table. I look past the counter and spot dozens of pre-made salads in the crisper and rows of bread loaves on the shelf. Coffee cups climb in ziggurat rows, each boasting a clever logo, demarking this place. Signs remind visitors that Waffle House serves more t-bone steaks than any other place in the world. I'll have to take that on faith; I can't imagine coming to Waffle House for a steak.

Along the wall above the grill area, "House Rules" speak in a sort of semaphore, jaunty and telegraphed reminders that Waffle House does not discriminate against patrons or expect them to pay in advance, but neither does it tolerate disrespectful behavior (a strange binary somewhat hidden amid other platitudes). And, perhaps most importantly, patrons are reminded that booths are reserved for larger groups, that singles and two-tops may be asked to move. Discipline permeates the interior, wafting like steam, filling the crevasses. A guy walks through the door. He's wearing desert camouflage.


"You want water?" asks the server as the guy sits down.
"You know I never want water," he replies.
"Well, you never know."

How often do they replay this script? I take a sip from my own glass and contemplate my own cup of coffee. I am a stranger here, free to write or eat or stare out the window. But many folks hanging out in Waffle House are regulars: truckers who plan their routes around Waffle House stops; klatches of old folks who visit every Saturday morning, gabbing about local affairs of one sort or another; couples sharing a room at a nearby motel, stuck between bills and trying to ignore the sex trade or meth labs bubbling through paper-thin walls.

For these people, more than me, Waffle House is appropriately named: walls that contain them and protect them. Its discipline, its consistency, its order is both welcomed and largely ignored. Locals can jaw with the servers, sitting single or double to a booth if they wish. And no one really minds if the bedraggled couple staying nearby leaves with a coffee cup. They'll be back. They'll keep coming until one day they stop. And there are plenty of coffee cups stacked for the next visitors who pass through the door. The rules seem more fixed for folks like me, strangers passing through. 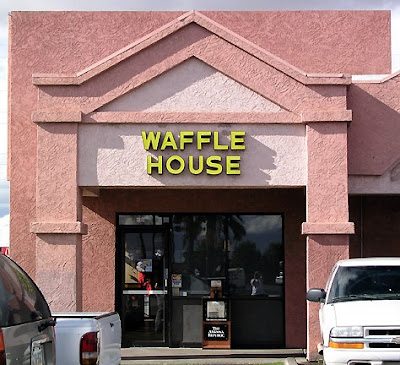 I sit in a Waffle House, just a mile away from another one, and I find that this node looks like any other in the chain. But to the locals, even a Waffle House becomes a locale. Indeed, I quickly learn that the Waffle House on 59th is quite a different thing indeed than the one of 51st. The place on 59th resembles a typical Waffle House, a detached building near a major highway, a spot boasting a separate sign that can be read at a high speed. The one on 51st looks more subdued, part of a lowslung row of businesses, a narrow cleft that is darkened by lowered blinds. Even the sign is less obvious, located above the entrance but under the eave. A server tells me that the place of 51st attracts a pretty strange clientele.

Without much prompting, she illustrates her case with the legend of the Phone Licker. This guy, she says, occasionally ambles down McDowell Road before stopping by the payphone outside. He sneaks a salacious peak for privacy's sake and then tongues the phone receiver. She caught him once, if only to prove to her friends that she's not crazy, but he scampered off without an explanation. "We don't need TV," she announces to me. "We've got McDowell vision." It could be a bar, this Waffle House. It certainly offers the kind of tall tales that one would expect at a well-worn watering hole. It's certainly a different locale than its cousin on 59th.

This difference requires one to ask: how meaningfully can this Waffle House, or any Waffle House, be called a node of omnitopia? After all, omnitopia is the death of locale, a word referring to a place imbued with time and character. And omnitopia finds an essential counterpoint in locale as both an exception to its rule and a limit to its reach. While omnitopia promises fluid transition between ersatz environments, conveyance to the same place, locale is the particular, the disconnected, the self-sustaining.

Even so, locale is not imminent flow, the acute sensorial clarity of high-speed traffic. In other words, it is not this node of omnitopia, which is hardly different from that node, other than a distinction of logo. You do not experience locale at a Food Court by choosing to consume a meal at KFC as opposed to Taco Bell. Locale is the piercing of the omnitopian shell. Or, more correctly, locale resides beyond the omnitopian domain altogether, at least by the side of the road.

The old mom and pop motels -- the kinds of places that drew me to this conversation all those years ago -- tried to create senses of locale. In the dawning of the automobile age, tourist courts were fashioned to resemble places that contained a unique history and set of norms, simulacra of comfy cottages or native teepees or southwestern pueblos (with related rude caricatures). One would drive a hundred miles or more, an impressive distance in the early days, and settle into a performance of place designed to catch the motorist's eye. "I am a home dweller," one might think, "a native, safely cocooned behind a door that closes just for me." Such safety, far from home. Eventually chains like Holiday Inn would even more completely expand the omnitopian enclave to include roadside lodges, where "the best surprise is no surprise," all to ensure that we need never leave.

Thus we might conclude that travel as consistency rather than transformation marks the modern age. And the traveler in search of locale, fleeing the metastasizing tourist realm -- the conflation of interiors that Émile Zola described as the "cathedral of modern trade," that Walter Benjamin recognized in the Parisian arcade, that Siegfried Kracauer found in the urban hotel lobby -- would be required to venture further and further away from the urban cores and the dependable sameness of tourist bubbles. And where do we find Waffle House along this journey? Does Waffle House lead away from omnitopia or toward the same continuum?