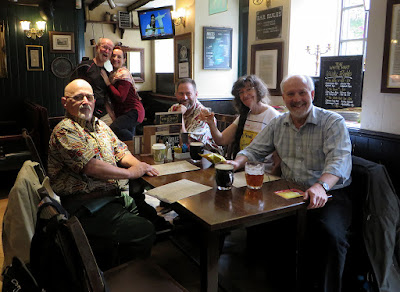 First Fringe performances! We started with Breakfast with Vivaldi, a delightful and fascinating hybrid of music and dialogue featuring the relationship between earnest Vivaldi and horndog Handel set against the backdrop of the Spanish Inquisition. We then had lunch at The White Hart Inn with several of the actors and performers (and some quarter-cask Laphroaig), enjoying conversation about some of the humorous behind-the-scenes dimensions of the show. Hanns and I thereafter meandered to an even more intimate venue, Paradise at the Vault, where we saw a contemporary adaptation of Macbeth set in a youth offenders prison, with a cast of three! It was fun snagging front row seats, close enough to smell the sweat - fun, that is, until the daggers went flying. Then it was a bit too close for comfort. I imagined the story folks would tell: There's Andy, enjoying his first Edinburgh Fringe Festival, only to get stabbed at the end of "The Scottish Play." But then again, what a way to go! 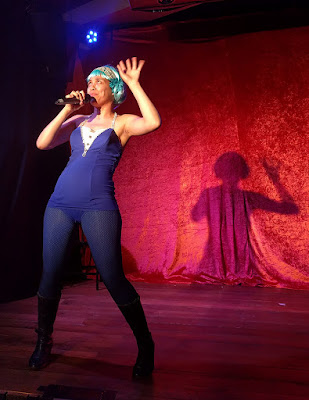 Tonight was even more fun than today. Was amazed by Matthew Spangler's adaptation of The Rime of the Ancient Mariner - and blown away by Benjamin Evett's masterful performance. Even better, I had a chance to tell Ben personally at dinner afterward (returning, of course, to Greyfriars Bobby) how much I loved how he put heart, soul, and courage into that one-person show. Amazing! After dinner I was so jazzed that I checked the "around me" function of the Fringe app and found a comedy/magic/burlesque show right across from my apartment. And it was free! Gonna sleep in a bit tomorrow, and then return to the fray. 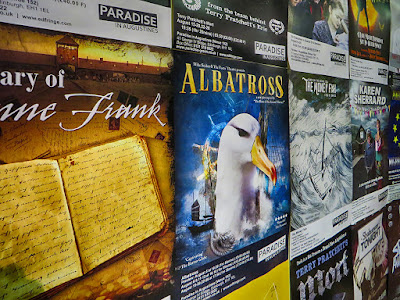