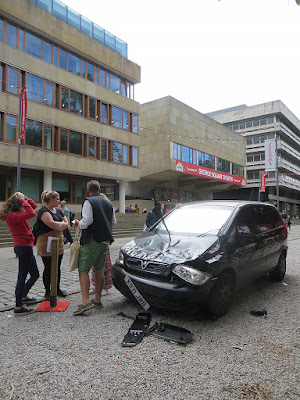 Quick break from a busy day. Morning started with laundry-time in the apartment before taking a nice walk under rare blue skies. Then it was performance time: three shows back to back. First was "Oh, Hello," performed by Jamie Rees. It was an impulse decision, but a good one: a one-person show about an aging performer's descent from lubricated self-confidence to tragic realization about his diminished value. Hilarious and sad. For some reason I thought that this piece was fictional. Turns out I need to learn more about the real actor named Charles Hawtrey. Anyway, after that it was time to climb into a hot and stuffy venue - an actual wrecked car - to follow the clues to how the performer got herself (and the backseat audience) into this crash. I didn't so much love the story as I dug the experience, particularly the knowledge that every person sitting with me was equally perplexed by the whole thing. 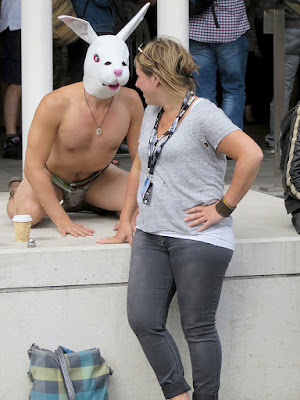 Afterward I bought a dram of 18-year Ledaig (pronounced Led-Chig, though there's some debate on that topic) before stumbling into something billed as a comedy show but was actually an interview program featuring a man who injects himself with snake venom, a woman who eats pieces of brick, and a dude pulled up from the audience who described the effects of having one of his testicles blow up to the size of a grapefruit. So, yeah, I'm getting plenty of the Edinburgh Fringe experience! Later on I'll drop by a party for Matthew Spangler's adaptation of The Rime of the Ancient Mariner. After that, who knows?
Email ThisBlogThis!Share to TwitterShare to FacebookShare to Pinterest
Posted by highway163 at 6:00 PM