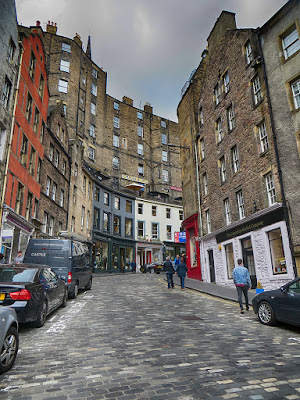 Yesterday was the final full day in Edinburgh, and we made the most out of it. After a relaxing morning, a few of us met to see Dublin Oldschool, perhaps the best show (outside of Albatross and Vivaldi for Breakfast, of course!) I saw at the Fringe. Spoken word, explosive rap, clever blocking, subtle staging, and amazing seats! Best of all, the performance included so many shout-outs to Ireland’s capital city, I can already imagine myself walking around the place when we arrive later tonight. Sure I’ll visit as a tourist, but I’ll be reminded how other layers of the city rest atop and beneath that rarified continuum. Afterward we attended a wrap party for the cast of Vivaldi to chat and celebrate the achievements of the Hawaii based crew who came to Edinburgh, not so much for money or fame but just to get their kicks. I was happy to help contribute to the festivities with a bottle of Laphroaig (which I don’t think survived two hours). 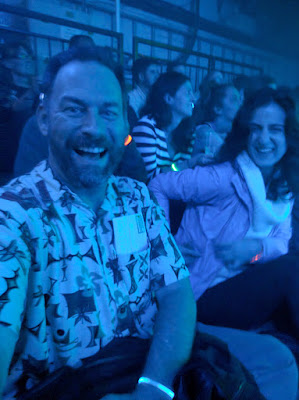 Then it was off to another highlight of the last couple weeks, a performance of Trainspotting. We queued outside what appeared to be a club, were handed glow sticks and received hand stamps, and then made our way into a smoky, hazy, jammin’ dance floor, with the characters occupying the room’s center. Gradually the tableau gave way to drama and we settled into a performance that evoked the shock, stench, humor, and pathos of the book (I’m told) and movie. Of course, this being the Fringe, performers pushed boundaries in ways that would likely not be acceptable back in the States. Full frontal nudity was just the start of it. When one of the performers woke up having shat himself from the night before, he not only cleaned himself off but actually flung the filthy blanket and towel into the audience. When other characters would pass out, they’d sidle up to audience members and lay across their laps. [I know this from personal experience!] And of course when dudes ran through the room with knives, I really wondered just how close I was to being stabbed if just one actor fell the wrong way. It was a perfect last show for such a violently and amazingly eclectic festival. Afterward we went out for pints and whiskey, stopping first at a nearby pop-up spot before settling in at the Devil’s Advocate, which lies down a narrow line of steps that descend from the Royal Mile. Now it’s time to pack and say some goodbyes before catching a flight to Dublin and three final days of European adventure! 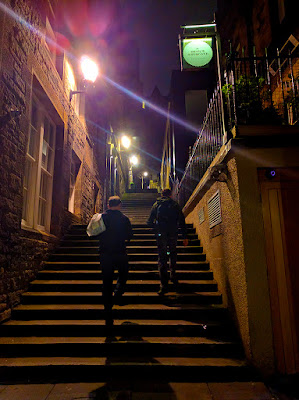 Email ThisBlogThis!Share to TwitterShare to FacebookShare to Pinterest
Posted by highway163 at 11:00 AM