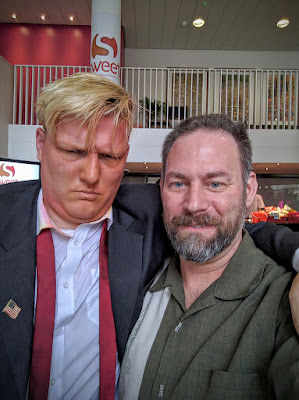 Second to the last full day in Edinburgh, packed with three shows so far - and one more this evening. The afternoon started with Trumpageddon, Simon Jay's satirical take on The Donald, complete with orange makeup, loopy answers to audience queries, and occasional efforts to unpack the psychology of the would-be Tweeter-in-Chief. Afterward I joined Matt's crew to check out Scorched, a moving, complex, and somewhat bewildering one-person show most notable for its remarkable staging (most especially with the sight of images dancing on pouring sand drained from the protagonist's fingers). Then I headed off to Nuclear Family, an audience participation performance that called for us to vote on how workers in a nuclear plant disaster should react to the unfolding crisis. It was... not great. But it was fun to compare notes with audience members, reviewing files and tape recordings to make sense of, and deliberate about, the actors' decisions and outcomes. I'm resting now but will take off later to see Shit-Faced Shakespeare a show whose title should be taken literally. The actor supposedly drinks for four hours prior to the show. Who knows what will happen?
Email ThisBlogThis!Share to TwitterShare to FacebookShare to Pinterest
Posted by highway163 at 8:00 PM