Scotland: Plunging further into the Fringe 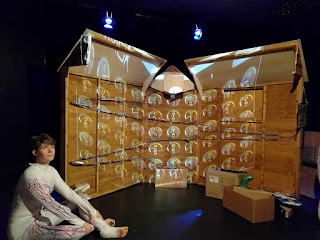 Great afternoon of performances! “Escape from the Planet of the Day that Time Forgot” is a jumble of B-movie references performed by a plucky cast of three, using cheesy props and pantomime to transport audiences to planets containing Norse gods, dinosaurs, and Triffids! Silly, pointless, wonderful! Then came “The Inevitable Heartbreak Of Gavin Plimsole,” a show that assigns a heartbeat monitor to each audience member, projecting them all onto the stage. The performer then advances through a series of funny and sad narratives depending on the collective and individual results. Once more I was called onto the stage (proof that it pays to queue early) and given a can of red bull to drink. Weirdly enough, my heart rate shot up when I was speaking before the audience, but it actually dropped after the red bull took effect. Not gonna lie, I actually shed a couple tears by the end of the performance - which should not be too surprising given the double-meaning of the show’s title. I’m back at the apartment now, considering options for the rest of the day. Wow, it’s nice to have a place so close to the venues so I can chill for a while, only to plunge back into the Fringe whenever I want! 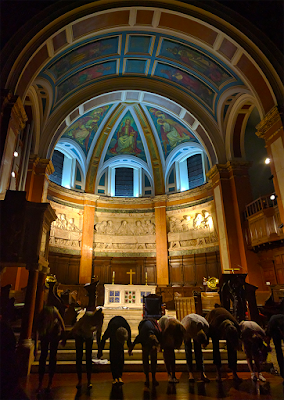 I don’t know how I’m gonna ever see all the shows I’ve planned, because my friends keep recommending new ones - and they keep giving me good advice! Tonight it was The Master and Margarita, a magical realist novel that alternates between First Century Jerusalem and 1930s Moscow, which was presented as a promenade. In other words, the audience didn’t watch the performance but rather followed the actors to various stations within St Cuthbert’s Church. Even better, audience members were frequently invited to participate, some to dance with cast members in the Devil's Midnight Ball, others to shine spotlights to illuminate various scenes (that was my job!). My favorite part was the point at which I was sitting by the floor, watching Margarita seek mercy for a woman who’d killed her child, when one of the actors I hadn’t noticed before leaned in close and whispered some commentary to me, mocking true love. The moment was sort of scripted, sort of improvised, but only, entirely for my hearing. Like a secret. A strange, fascinating, exhilarating experience. So glad I accepted Crystal's recommendation to join her for the adventure.
Email ThisBlogThis!Share to TwitterShare to FacebookShare to Pinterest
Posted by highway163 at 11:00 PM