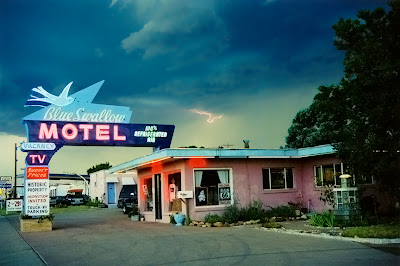 I'm certain one can stay at other perfectly nice motels in Tucumcari. The famed New Mexico town of 2,000 motel rooms (now advertised at 1,200) boasts a twinkling, glowing collection of neon motel masterpieces, such as the Americana, the Buckaroo, and the Palomino. But the Blue Swallow Motel pulls me off the highway every time. We first visited the Blue Swallow in 1996 on our first family road trip vacation and discovered immediately why so many travelers around the world love this place. The motel itself is pretty basic, an L-shaped assemblage of rooms tucked off Tucumcari's main street, with a clam-pattern stuccoed facade topped by glowing blue swallows. Yet this motel offers more than just a place to crash. Once a set of cottages built in 1939, now a beloved holdout against interstate homogeneity, the Blue Swallow is one of the nicest motels in the United States.

In 1996 Lillian Redman was still running the Blue Swallow, as she had since 1958 when she received the property as an engagement present. Lillian had met countless folks by the time we dropped by, and yet she had plenty of time to chat with us about her memories of traveling from Texas to New Mexico in 1916 by covered wagon, her work as a Harvey Girl in the 1930s, her motel's fading fortunes with the arrival of I-40, and her belief that a motel should serve as a spiritual sanctuary for traveling souls. Lillian charged awfully low rates (about eleven bucks) for a simple room with hardwood floors and a black and white television. Her motel had no phones and no frills. But you could park your car in a covered garage right next to your room, and you could sit out front beneath the glow of the blue swallow and watch the cars stroll by. 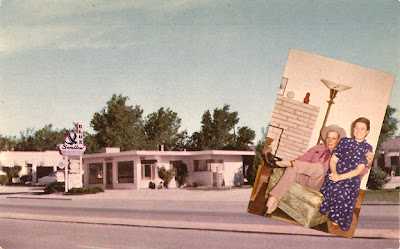 By our first visit in 1996, Lillian's story was well known and often repeated. She'd been featured in Smithsonian Magazine, photographed for books and magazines around the world, and transformed into an icon of the Mother Road. But she was 86 and getting tired. I recall that she used a wheel chair to get around, even as her mind was quick and her spirits warm. We chatted for about a half hour, looking at old pictures and sharing stories about the road. Jenny and I knew we would visit with her every time we returned to this part of the country, just to hear her stories. But she soon sold her motel, and on February 21, 1999, Lillian Redman died.

With Lillian's death, many folks fear that the Blue Swallow may fade into history. Dave and Hilda Bakke purchased the motel, refurbishing the property without harming its integrity. And yet they soon had to sell. More recently Bill Kinder and Terri Johnson purchased the property, embarking on further restorations that aim to return the motel to its 1950s-era appearance. So far the response to their plans has been positive. But lovers of the Blue Swallow know that its existence remains tentative as long as motorists stick to the interstate. We hope, but we have no promises. Even so, Jenny and I will return to Tucumcari sometime in the next year and we'll chat with Bill and Terri. We'll tell them how much we appreciate their efforts to keep a roadside legend alive, and we won't mind paying recently increased room rates as long as the Blue Swallow continues to glow.

Email ThisBlogThis!Share to TwitterShare to FacebookShare to Pinterest
Posted by highway163 at 9:52 AM

Mr. and Mrs. Ted Jones were the first people to own The Blue Swallow Motel, purchasing it from builder CA Huggins. They owned it until the mid 50's. Sincerely,
the current owners of the Blue Swallow Motel, Kevin and Nancy Mueller. Check us out on Facebook or our website, www.blueswallowmotel.com