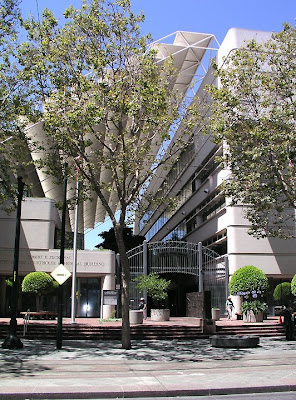 Recently I was asked to shoot some photographs of the Japanese American Internment Memorial at San Jose's Robert Pekham Federal Building. The request came from an Alabama professor whose forthcoming research calls for her to analyze this site. She'd seen it years ago, but her travel plans would not bring her back to San Jose soon enough to take the pictures herself. I've worked in San Jose since 1998 but I'd never seen the Memorial, so I was happy to take the job. I even accepted an unofficial "honorarium" that would buy me a decent lunch after the shoot was done. 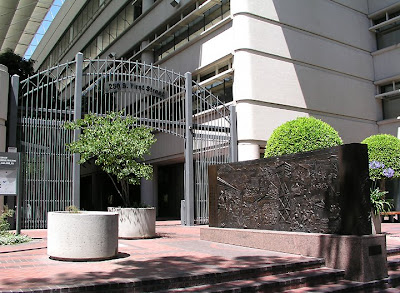 Circling the site and thinking about ideal angles I flashed on the coolness of a total stranger asking me to help in her research simply because I'm a fellow academic. I've never met her, and I couldn't pick her out of a crowd, but I'm happy to collaborate on her project. I've recently begun negotiations to sign a contract for my own new book, so I was happy to lend a hand, hoping that good karma goes both ways; one day soon I might ask a similar favor. 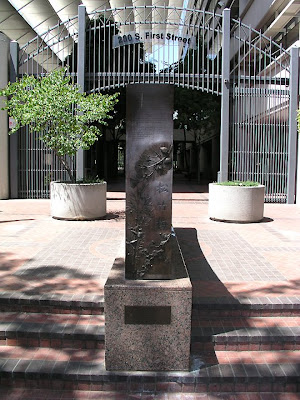 The bronze monument I was asked to photograph was sculpted by Ruth Asawa and unveiled in 1994 on the East Plaza of the Federal Building. Visiting the site I encountered a moderately thick slab covered on both sides with bas-relief images depicting a timeline that ranges from Japanese-West Coast immigration through barbed-wire internment to efforts to publicize the plight of people who were jailed solely due to their ancestry. One additional component that drew my attention was a reproduction of the executive order forcing American citizens of Japanese descent to leave their homes, businesses, and friends because of war-fed panic. Given that Ruth Asawa was herself forced into one of these camps, I felt a vivid sense of the history that the monument evokes, a sad story that is unknown to many Americans. 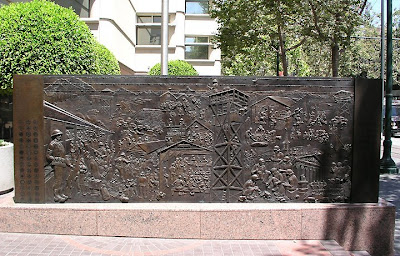 Today most of us assume that jailing more than 100,000 citizens in response to war or terrorist attack would be unthinkable. There's no way we would repeat those sins. Yet in the past five years I remember stories of Arab Americans, hell, just people wearing turbans, being threatened and harassed by officials within the government, and by thugs outside its control. To those Americans, I imagine that the difference between officials (at least some of them) and thugs has grown thin since 9/11. Walking around the Memorial I find myself thinking about the narrow divide that separates our worst impulses from our highest ideals, and I wonder how close we are to abandoning the American balance of assimilation and pluralism. 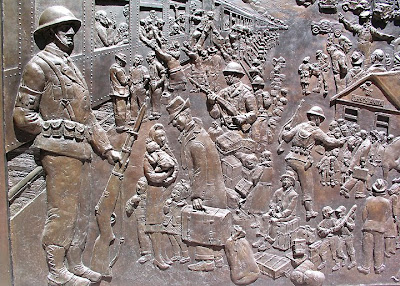 I wrote these notes while enjoying my honorarium-meal at Asqew Grill. I sat among an eclectic mix of folks whose ancestries surely represent a mini-United Nations, I marveled about how far we've come since those bad old days in which we used war as an excuse to ignore the basic humanity of all people, especially our enemies, and I thought about how far we yet have to go. Just then a business-attired fellow breezed in and asked a friend whether this restaurant was any good. He explained, "I've given up on all those places downtown where they don't even speak English." His friend smiled wanly and said something noncommittal. The inquiring fellow surveyed the long line of patrons queuing to give their orders and decided not to wait. 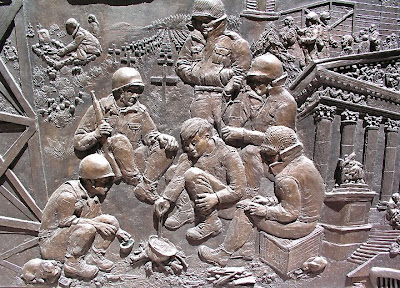 I disagree with his attitude, but I share some of his urgency. Deciding how our nation will protect our values while we maintain our security is a challenge that demands our most thoughtful and engaged discourse. There's a long line of problems waiting to be tackled by the next administration, the one that will inherit the current Washington mess. But that administration, all of us really, must recognize what was eloquently described by Martin Luther King as the "fierce urgency of now." We can't wait.

Note: Photos Copyright Andrew Wood
Email ThisBlogThis!Share to TwitterShare to FacebookShare to Pinterest
Posted by highway163 at 7:07 AM