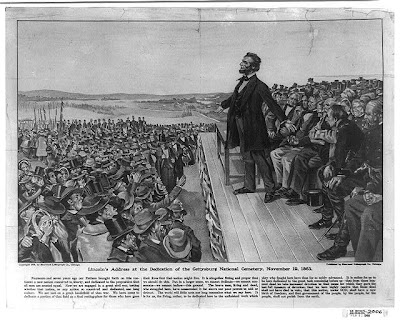 For father's day, my daughter presented a memorized recitation of one of my favorite speeches, the Dragnet What is a cop? speech from the episode, "The Interrogation." You may laugh, but I've always gotten a kick out of that oration. And I loved hearing my daughter recreate that staccato rhythm that made Jack Webb famous.

Of course, memorizing things is a family tradition. A few years ago, Jenny, Vienna, and I memorized the state capitals during one of our road trips. On our 2001 President Trek we tackled the names of all the presidents in order, sung to the tune of the Star Spangled Banner. Last year, visiting Washington D.C. during our 2006 summer road trip, we committed the Gettysburg Address to memory. I've forgotten some of the previous things we memorized, but that speech stuck with me.

Every once in a while, I'll run through the Gettysburg Address and think about its words. Jenny tells me that she sometime uses the Address to lull herself to sleep at night. Vienna probably never practices, but she can race through the speech with little or no error even a year later - her memory is that good. But I have found the Gettysburg Address to be a solemn and meaningful kind of civic prayer that I utter to myself now and again. The Address demonstrates the power of visionary statesmanship.

Recently I came across a reading of the Address by Sam Waterston and I found myself understanding the meaning of some words and passages with even more precision. Waterston's use of emphasis, pause, and intonation shows real insight. His pacing is slow, much too slow for a contemporary stage. But one gathers clearly from his oration a sense of where the Address was delivered and why. 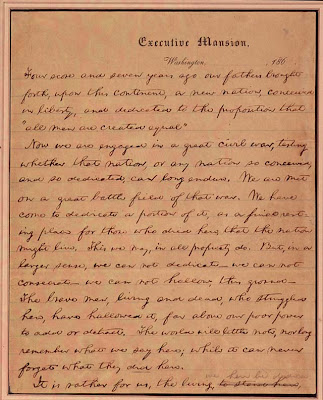 Prior to listening to Waterston's reading, I used to emphasize the we in Lincoln's reminder: "We cannot dedicate, we cannot consecrate..." For the life of me, I can't say why I missed the better choice to focus on the rhyming nature of those two phrases: "We cannot dedicate, we cannot consecrate..." Also when Lincoln declared, "It is rather for us to be here dedicated to the great task remaining before us," I chose to emphasize the words us and great task, but I missed the chance to punch the word before. Listening to Waterston's rendition, that third moment of emphasis adds a sense of presence, a recognition that long and bloody days lay ahead.

Similarly, Waterston's respectful and dirge-like recitation of the phrase honored dead and the word here in the phrase "that we here highly resolve" remind the contemporary listener of a vast field of fallen soldiers, lives that would be obscured by a faster reading. Finally, I appreciate Waterston's emphasis of the word people at the conclusion of the Address. Arty speakers might punch of, by, and for, but doing so merely celebrates a clever turn of phrase and misses the underlying meaning of that coda. Consider the difference: "and that government of the people, by the people, for the people shall not perish from the earth."

I hope I can be forgiven for comparing such eloquent oration to what passes for political discourse in today's troubling times, and finding far too many of our television-age politicians to be dreadfully lacking in their ability to produce such stirring sentiment. Modern public speakers who come from the spiritual tradition, those who practice the art of repetition and respect the value of rhythm, impress me the most. But far too frequently, even their words are distilled into commercial soundbites and empty talking-points.

Lincoln's Gettysburg Address was only a few minutes long. But he had already demonstrated his ability to face the great orators of his day in much more elaborate venues. As you'll recall, Abraham Lincoln battled Stephen Douglas for hours at a time during their famed 1858 debates in which both speakers demonstrated erudition and élan that is sadly lacking today. I often wonder if a return to public financed campaigns and a change in the nature of our presidential debates might inspire a rebirth of the kind of powerful oratory so clearly demonstrated by our sixteenth president.

At least here at home I can enjoy Vienna's oratorical skills and wonder if she might have a future in presidential politics. On father's day, her seventeenth, I can't help but wonder what my daughter will accomplish next.

Email ThisBlogThis!Share to TwitterShare to FacebookShare to Pinterest
Posted by highway163 at 9:13 AM