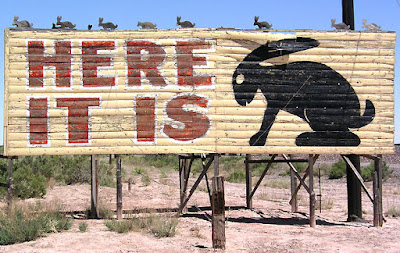 This well-worn billboard marks the Jack Rabbit Trading Post near Joseph City, Arizona. To me, this image illustrates one of the strange attractions of Route 66, its ability to create a sense of place based upon signs, and the communal desire to believe that this place has meaning among all others. If you’ve ever been to the Jack Rabbit Trading Post, you may remember a pleasant tourist trap selling all sorts of trinkets and doodads related to the highway, along with dozens of shirts, postcards, playing card decks, pennants, and other souvenirs depicting that silly rabbit. I have a photo of my daughter Vienna atop a fiberglass jackrabbit that we took when first visiting Arizona in 1996. If you could pull the frame back from that cute kid sitting on an oversized animal, you’d see a desolate panorama offering no other reason to pull over except for a sign announcing, “here it is.” We just had to stop. 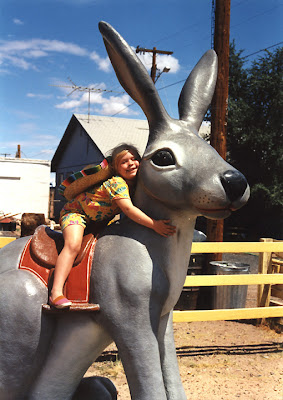 Route 66 is truly a ribbon of signs pointing to ordinary places and people. There’s Cyrus Avery who helped promote the Chicago-L.A. road. He was no prophet; Cy just wanted to bring more business into the Ozarks region. There’s Lester Dill who opened Meramec Caverns to highway cave tourists. He was no icon; Les just wanted to sell tickets. There’s Andy Payne, a Native American who endured the punishing “Bunion Derby” footrace across all eight states. He was no hero; Andy just didn’t quit. Then there are some of the Route 66 notables I’ve been fortunate enough to meet: Lillian Redmond who operated Tucumcari's Blue Swallow Motel as a haven for countless road-weary souls, Tom Teague whose stories about the Mother Road inspired so many people to see it for themselves, and Bob Waldmire whose detailed drawings of the highway's places and people shaped much of its meaning. These are special people, but still just regular folks.

It is the humility and honesty and basic humanity of Route 66 that keeps this highway in my fondest recollections. Its bowling alleys, motels, diners, and juke joints, its lonely stretches and crowded cities, reveal nothing more than themselves. There’s no secret to loving this road other than the joy of being exactly where you are. That, I think, is the pleasure of seeing a dopey black jackrabbit in the middle of an empty stretch of hot asphalt in Joseph City, Arizona.

You’ve driven almost the entire stretch of this highway -- "more than two thousand miles all the way” -- as described by Bobby Troup and popularized by Nat King Cole. You’ve met strange and ordinary and fascinating people, even as you’ve grown closer to your fellow travelers. You’ve sampled fried chicken and apple pie and authentic Tex-Mex cuisine. You’re about a day or so from dipping your toes in the Pacific Ocean, but you will stop here and take a picture of the rabbit. That’s the mission of this place, to sell you trinkets and provide a backdrop for your photos. You know its unglamorous purpose, but you don’t mind. You will act like a tourist, and you don’t care. The sign makes it OK.
Email ThisBlogThis!Share to TwitterShare to FacebookShare to Pinterest
Posted by highway163 at 7:36 AM