St. Francis Hotel Courts - Before and After

The St. Francis Hotel Courts were an Alabama-based offshoot of the Alamo Plaza Hotel Courts, a southern motel chain often cited as an inspiration for more ambitious brands such as Holiday Inn. The authors of The Motel in America explain that W.G. "Mac" McGrady refurbished the Mobile property in 1968, abandoning the ersatz Spanish mission look for something more "contemporary." The property has since been demolished. 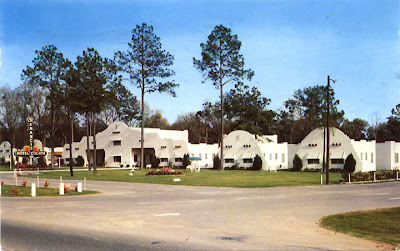 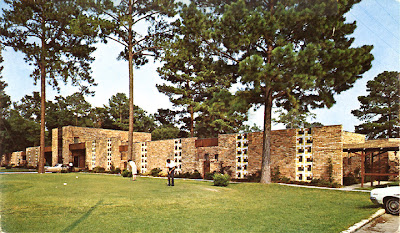 Jackle, J.A., Sculle, K.A., & Rogers, J.S. (1996). The motel in America. Baltimore, MD: The Johns Hopkins University Press.
Email ThisBlogThis!Share to TwitterShare to FacebookShare to Pinterest
Posted by highway163 at 8:01 AM

Index Labels: before and after, motels, postcards, roadside