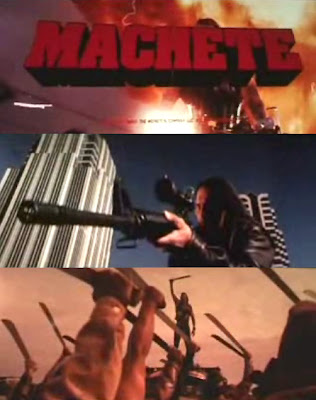 I hear that Robert Rodriguez is planning to release a sequel of sorts to Grindhouse based on one of that movie’s faux shorts: Machete. Given the box office failure of Grindhouse I admire Rodriguez's moxie for attempting a follow-up. And I hope he pulls it off, because I loved that movie. Grindhouse delivered that illicit film experience I heard about when I were a kid, the really bad films that my mom would never let me see. She was pretty cool about movies, too. She took me to see Saturday Night Fever, even though she had to explain what a condom was afterward. We saw Animal House, All That Jazz, and various other films that were a bit advanced for my preteen years. But some movies were off limits. When I was a teenager in the eighties that meant sneaking into "hard R" films like Maniac or The Beast Within. But even then, I recognized limits that could not be easily trespassed.

The most hardcore films, the ones that went all the way, resided somewhere beyond the suburban confines of the multiplex. They were too far out, the subject of myth and legend, cheap and cheesy movies like Faces of Death. These were the "exploitation" flicks that floated on the periphery of the legitimate film industry, as they have since its inception. From the turn of the last century, exploitation films have trespassed against the norms of polite society with genres like "hygiene" films that sometimes included footage of live births (e.g., Mom and Dad), drug "warning" films whose supposedly principled lessons justified scenes of depravity (e.g., Reefer Madness), and documentary films that titillated far more than they educated (e.g., Mondo Cane). Comparable to circus sideshows, exploitation films promised scenes that would shock, appall, and amuse: a vacation from the mundane, entertainment on the outskirts of morality. 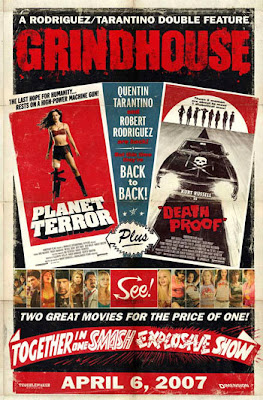 During the late sixties and seventies, "grindhouses" showed exploitation flicks in decrepit inner city theaters, "grinding out" awful films all day and into the early morning hours. In his book Bold! Daring! Shocking! True!: A History of exploitation films, 1919-1959, Eric Schaefer describes the grindhouse as more than a place, but rather as a heterotopian liminoid between authorized and seemingly unauthorized pleasures, a site for "films that existed on the border between Hollywood product and the underground world of the pornographic stag reel . . . it was a place in between" (p. 322). With their sticky floors and rancid selections, their reputations as being places where you don’t ask for butter on your popcorn, grindhouses inspired future film directors like Quentin Tarantino and Robert Rodriguez who gulped double- or even triple-courses of low-budget movies in varied flavors of sleaze: hicksploitation, sexploitation, and blacksploitation, not to mention creepy hybrids such as Women in Prison film meets Nazi Fetish film (Ilsa: She-Wolf of the SS) and the even odder Nazi Fetish film meets blacksploitation film (The Black Gestapo). These movies existed solely to shock (and make a few bucks).

Whether shown on skid-row screens or packaged for rural drive-in theaters, grindhouse prints shuttled from site to site, getting increasingly degraded along the way. Every scratched and missing frame signified bad cinema: low quality, low budget, and low culture -- not "deliciously," or "ironically," or "cleverly." It was just bad stuff. Of course, in the same manner that disposable pop culture often becomes appropriated a generation after its passing from practical use, many of these films are now cataloged and debated by aficionados, their poster art is displayed in pricy books and museum exhibits, and their contributions to cinema history discussed by serious minded experts. That's why a studio was willing to pony up $60 million (some say much more) to recreate the "grindhouse experience," complete with slipping sprockets, burnt out projectors, and missing frames (entire scenes, actually) that joyfully mangled the film's narrative beyond comprehensibility. And Jenny and I showed up at the Skyview Drive-in to see Grindhouse on its first night of release. That night, the projectionist announced over the speaker system that the film's visual and auditory imperfections were intentional; we should not complain to management about missing scenes. Happily, no one seemed to mind. But the place wasn't exactly packed either.

So now Robert Rodriguez may direct Machete, box office be damned. I say, good for him. Based on the trailer, the story will follow the adventures of a day laborer hired to commit a murder and then take the rap, who then turns on his bosses and forms an army of the dispossessed to raise hell. Ideally Rodriguez will not just make a fake low-budget film, he'll actually limit himself to a "Grindhouse" budget (accounting for inflation, of course). Exploding squibs instead of CGI effects, no-name actors rather than Hollywood A-listers, that sort of thing. And I hope Machete isn't aborted as a straight-to-DVD toss-off; I hope that it screens in all its tacky glory at ancient second-run theaters or maybe even abandoned drive-ins reopened for a few weeks in the summer. I'd enjoy that kind of Machete for the same reason that I love visiting architectural relics like abandoned motels and defunct gas stations. I love "grindhouse movies" because they contain time capsules of yesterday’s fashions, styles, and attitudes that don’t belong in the present. In these 'scapes (begin with "e" if you wish) we see the past that hasn't been cleaned up, polished for new consumption, and transformed into merely more of the perpetual present. There, amidst the rubble, we run the risk of being surprised by something genuinely new. That's why I’m looking forward to Machete, if Rodriguez can pull it off. Even if this flick is another glorious failure, I'll be first in line to ride it all the way down.

Follow-up: Here's my review of Machete (the movie).


Email ThisBlogThis!Share to TwitterShare to FacebookShare to Pinterest
Posted by highway163 at 10:09 AM