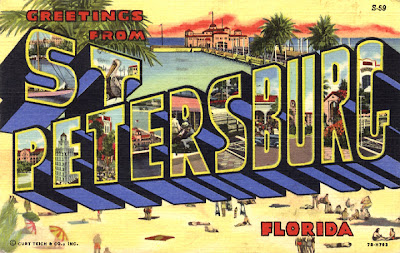 St. Petersburg desperately wants to be young and hip, but I prefer its older self. My mom and I lived in the city for a while before moving to Dunedin and ending up in Countryside. As a kid, St. Petersburg ("St. Pete" to locals) was home to Haslam's Bookstore, introduced by my mother as a wonderful place to play, and Aunt Hattie's, which allowed kids to pick a toy out of a chest (if they cleaned their plates). Even then St. Pete was also covered with the thick patina of older memories and places: sprawling waterside mansions and stuccoed hotels, bustling downtown restaurants filled with shoppers and strollers, and a strict racial geography that distilled the world below Central Avenue into "South St. Pete." Even as a kid, I understood the euphemism. Most of all I remember St. Pete as the land of old people. 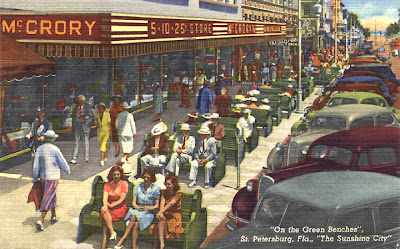 St. Pete was once called the City of Green Benches, a reference to its multitudes of seemingly eternal resting places for its many senior residents. Talk to anyone who lived in the Sunshine City before the 1970s and they'll reminisce about those rows upon rows of benches, often shaded by trees and always filled with elderly pensioners or vacationers seeking to perform the laid back Florida lifestyle. A 1959 Time Magazine article entitled The Old Subscribers recalls how the local paper increased its obituary space from two columns to five every fall when the oldsters would fill the green benches from morning to late afternoon, chatting, relaxing, and scanning the paper intently for errors. The benches are gone now, thanks to misguided efforts to rebrand the city. 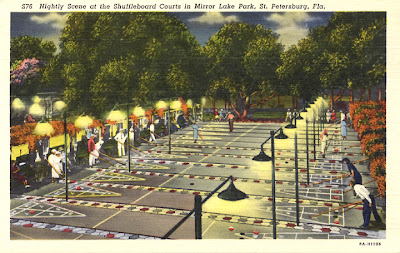 St. Pete was also once the shuffleboard capital of the world. Again, you can thank the old-timers for that. Folks recalling long-ago sea voyages yearned for lazy afternoons on the shuffleboard court where they played an approximation of the ocean liner game. In shuffleboard, you gently push a heavy puck along a narrow alley toward a triangular target area, earning points for the accuracy of your aim. It's kind of like a dart game, but with almost no velocity. I remember even the tiny mom and pop motels of that era boasting their own shuffleboard courts. Again though, shuffleboard was always associated with St. Pete's elderly population, so today's chamber-of-commerce-types generally shove that element of the city's sporting tradition off the edges of their pamphlets. 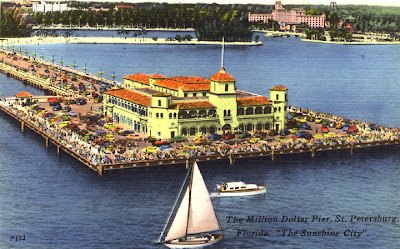 Finally, St. Pete was home to the famed "Million Dollar Pier," a fishing promenade extending 1,400 feet (boosters claimed one-half mile) into the bay, culminating with a Spanish-style recreation center. Opened in 1926, the Pier featured an open-air ballroom (later enclosed), a casino, and even studios for WSUN. The pier also included parking spots for 1,000 cars. Previously, St. Pete piers were privately owned affairs built by railroad magnates and local business leaders, but they suffered the wrath of various hurricanes that blew into the Gulf of Mexico and Tampa Bay. Even the first Municipal Pier was wiped out by a 1921 hurricane. But the Million Dollar Pier lasted for generations until its demolition in 1967. Today tourists and locals flock to a new gathering place simply called "The Pier," an inverted pyramid that offers a nice collection of shops, museums, and restaurants. The structure is cool in a sort of EPCOT Center way, but most folks of a certain age wish the city would have simply renovated the old pier.

These days I live in California, but I still consider myself a Floridian. So once every few years I return to the pier, amble through the nearby Salvador Dali Museum, poke through downtown antique shops, and visit the old apartment complex by the bay where my mom and I once lived. All the while, St. Pete continues to struggle like so much of Florida with shifts in population and property values. Some say that the Sunshine City's best days are long gone. But I have hope that folks will continue to search out places where time runs slower than usual. Who knows? The city may one day bring back those green benches. 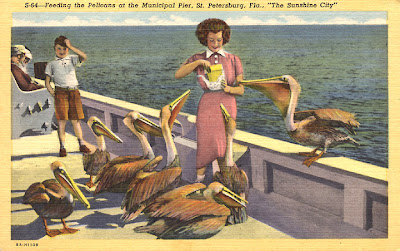 Also, look for my future post on one of St. Pete's most famous attractions: Webb City.
Email ThisBlogThis!Share to TwitterShare to FacebookShare to Pinterest
Posted by highway163 at 10:12 AM

My blog is based on St Pete and memories of the 'good old days'. Come by and visit!