Top 10 Things I can't Believe They Said on Arrested Development 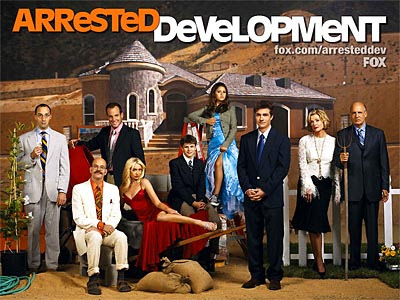 I want to celebrate Arrested Development, the best new comedy in years. Who cares if Fox cancelled the show in 2006? I still love the hilariously dysfunctional Bluth family and its Machiavellian maneuverings. The writing sparkles with acerbic wit and clever pop culture references. Multiple viewings reveal inside jokes and clever sight gags. And most importantly, Arrested Development works at a meta-level, commenting upon itself and its actors in surprising and rewarding ways.

Despite Arrested Development's critical acclaim, the show failed to expand its popularity beyond a devoted core audience. Folks who prefer passive low-bandwidth fare complained that the long-arc plotlines were difficult to follow. They kvetched about the show's lack of sympathetic characters. And they dismissed the show's inside jokes as insular and offputting. As a result, Arrested Development lasted only two and a half seasons, its last four episodes being ignominiously lumped together in a two-hour fire sale opposite the summer Olympics (I can still hear Lindsay exclaiming, "They're having a fire sale?").

Thank goodness for DVD. My family snarfed up the show's three seasons as soon as they could be purchased, and we have viewed them with a fervor equaled only by our love of The Simpsons. With each viewing, we await our favorite parts: a chicken dance here, an exasperated "come on!" there, and moments when one character asks with shock and surprise, "her?" We love Arrested Development, even though the show can sometimes be shockingly raunchy.

What follows is my collection of the top ten quotes from Arrested Development that somehow eluded network censors. Reader, beware. This collection gets pretty gross from time to time. If you are sensitive to sexually related puns and double-entendres, turn back now.

Tenth Place Episode 40 ("Righteous Brothers"): Michael warns Lucille that he's about to rat his brother out, and that they'll both soon share a cell in jail. Michael says, "I've got a nice hard cot with his name on it." Lucille asks, "You'd do that to your own brother?" Michael replies: "I said cot!"

Ninth Place Episode 28 ("Afternoon Delight"): Mike asks his Uncle Oscar to give some "Afternoon Delight" to Lucille, presuming that the term refers to sex. Oscar interprets the term as a pot reference. Things only go worse from there: "Now, the question is, which way do I try to get it in her. . . Maybe I'll put it in her brownie."

Eighth Place Episode 27 ("Sad Sack"): A prosecutor mistakenly believes that a cell phone photo taken by Tobias shows the desert terrain where the Bluth company helped Saddam Hussein hide WMD. After getting a good look at the photo (and providing a glimpse to the audience), the family lawyer makes a surprising announcement: "At this close they always look like landscape . . . You're looking at balls."

Seventh Place Episode 51 ("Family Ties"): Michael is talking on the phone with a Bluth company employee who is delighted about the inclusion of a prostitute to the office staff. Michael, of course, has no clue what the guy means: "And all the guys like her, huh? That is great. Ah, you mean "away" though." He later explains to his sister, "Nellie has blown them all away."

Sixth Place Episode 41 ("The Cabin Show"): Lindsay hands Michael a piece of paper that contains good news: "We did it, Mikey! We're super rich again. And I'm going to buy a car. The Volvo." Michael replies, "Lindsay, you're not going to start spending money. And this is not a Volvo." Lindsay explains, "Oh, that's from sitting on the copier."

Fourth Place Episode 24 ("The One Where They Build a House"): Michael tells G.O.B. that he cannot have the oddly named company boat he just purchased, just as Lucille walks in. Michael says, "Get rid of the Seaward." Lucille snaps back: "I'll leave when I'm good and ready."

Episode 2 ("Top Banana) Michael Bluth instructs his son, George Michael, to hire a cousin to help staff the family's banana stand. Because George Michael happens to be infatuated with the cousin, Michael's advice is particularly disturbing: "You stay on top of her, buddy. Do not be afraid to ride her - hard."

Episode 3 ("Bringing Up Buster"): Lucille complains that the family should spend more time with little brother Buster, perhaps by making a family treat called a cornball: "Because he's your brother, and you run around with everyone else, going on bike rides, making cornholes. Everyone's laughing and riding and cornholing except Buster."

Episode 7 ("My Mother the Car") George reveals that he's paying off his fellow prisoners: "...to keep me from getting strangled in the shower or worse." Lindsay asks, "Stabbed?" George replies: "In a way."

Episode 12 ("Marta Complex"): When Lucille treats Buster like a child, handing him a tissue to blow his nose, Buster replies, "No Mother, I can blow myself!"

Episode 12 ("Marta Complex"): After explaining to Lucille that he enjoys solitary confinement in prison, George asks a guard for a favor: "Hey Bruno. Any chance that the Hole is available between four and six?" Walking out, Lucille mutters: "I don't even want to know what that means."

Episode 29 ("Switch Hitter"): Lucille tries to convince an Army general whom she once dated to release Buster from being shipped off to Iraq. The general leans back in his chair and suggests a trade: "Maybe if you go downtown." Lucille marvels, "I haven't done that in thirty years." They are both referring to her work as a USO performer, when she sang the Petula Clark song of the same name.

Episode 31 ("Burning Love"): Lindsay announces her plans to seduce an actor named Frank Wrench: "I'm going to see if I can get a Wrench to strip my nuts." She soon realizes that her attempt at sexually charged language got away from her.

Episode 32 ("Ready, Aim, Marry me"): Tobias explains that he'd already used a gift basket meant to rekindle his marriage to Lindsay: "I'm afraid I prematurely shot my wad on what was supposed to be a dry run, if you will, so now I'm afraid I have something of a mess on my hands."

Episode 41 ("The Cabin Show"): Michael suggests that Lucille borrow the family cabin: "Maybe you can take a date up there." Lucille responds, "How am I supposed to find someone willing to go into that musty old claptrap." After an awkward pause, Michael clarifies: "The cabin, yes. That would be difficult too."

Episode 42 ("For British Eyes Only"): Tobias anticipates life as a Hollywood leading man: "Oh, I can just taste those meaty leading-man parts in my mouth right now."

Episode 47 ("Prison Break-In"): Lucille makes a disturbing announcement prior to an impending romantic rendezvous: "Oh, Michael, honey. I want to cry so bad. I don't think I can spare the moisture."

Episode 53 ("Development Arrested"): Tobias and Michael discuss entertainment for a family event. Tobias suggests, "I should call the Hot Cops and tell them to come up with something more nautically themed. Hot Sailors. Better yet, Hot Seam -" Michael quickly interjects: "I like Hot Sailors." Tobias agrees: "Me too."

Check out wikiquote for a huge list of Arrested Development quotes.
Email ThisBlogThis!Share to TwitterShare to FacebookShare to Pinterest
Posted by highway163 at 9:17 PM

The one that really shocked me the most about getting by the censors is "Gothic Castle." It's pretty much a single entendre--even the DVD's subtitles translate the cabbie's line as "Gothic Asshole." Or did I hallucinate that?

I know this is a super old post, but I can't let this topic go without bringing up the treatment of Buster's fake hand when George gets moved to house arrest. Buster is looking for it and is told by Lucille that it's in the dishwasher because she and George were using it. Buster sniffs it and grimaces, deciding to run it through again on "pots and pans." Ew.

Can you imagine what they'll do if given the time and relative leeway to do a movie?

The beauty of those creative geniuses is that they DON'T need more than the conventional TV format to make us laugh 'til we cry.

"Lindsay, you're not going to start spending money. And this is not a Volvo." Lindsay explains, "Oh, that's from sitting on the copier."

I love the follow-up line to this where the pictures repeatedly get mixed up. Lindsay looks reconsidering her purchase and says "I dunno, actually, it's a little boxy."

Yes. Love it. I'm a David Cross fan. Some of his stand up really floors me, specifically his stuff on Ashcroft and lady justice.

Thanks, Jake. From one rocker to another...

Not so much a line of dialogue, but the blue hand on the back of Kitty's head in "The Cabin Show" is particularly dirty.

All "blue myself" lines. Especially the flashback when Lindsay thinks Tobias is dead because of the doctor that says things wrong.