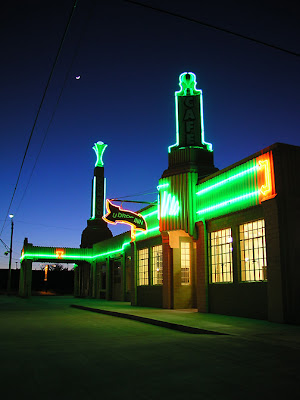 This is the first in an occasional series of some of my favorite places. My preference is to highlight roadside sites -- motels, diners, bowling alleys -- that have been bypassed or forgotten by most people. These places may be functional or in ruins, but they manage to convey something meaningful to me. I'll add to this collection as time allows.

The U-Drop Inn towers over the sleepy Texas panhandle town of Shamrock, marking the intersection of old Route 66, which traverses the nation from Chicago to L.A., and Highway 83, a vertical slice through America's midsection that connects Mexico and Canada. The cafe/filling station was designed, as the story goes, by John Nunn, who scratched the layout in the dirt with a nail. The place got its name from a contest whose eight-year old winner received five bucks for the moniker.

Even in the depths of the Great Depression, the U-Drop Inn offered an art deco masterpiece to weary motorists, with two raygun emplacements that seemed lifted from a Flash Gordon comic. But when Route 66 lost its designation and Interstate 40 bypassed the town, the U-Drop Inn dried up, destined to become yet another highway ghost, if not for a newfound nostalgia for what John Steinbeck called "The Mother Road." Today the U-Drop Inn (a.k.a., the Tower Station and Café) is a refurbished Mother Road marvel, glowing with green neon at night. The site houses the Shamrock Chamber of Commerce, but one can fantasize that a diner might attract some business there one day.
Email ThisBlogThis!Share to TwitterShare to FacebookShare to Pinterest
Posted by highway163 at 1:25 PM