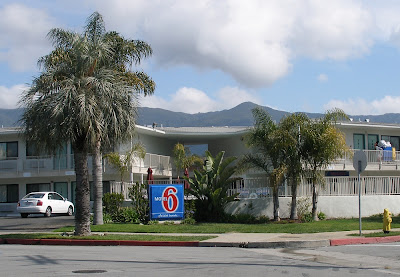 William Becker died on April 2nd at age 85. Did you know that? I didn't until I flipped through the obituary notices, where his death was reported more than a month late. I wouldn't have read further, perhaps, except for the full headline: "William Becker Founded Motel 6." That got my attention. Working with Paul Greene, Mr. Becker helped create a low budget motel chain that has earned my (somewhat grudging) admiration.

I have no idea about Becker's personality or character. But I know a bit about his creation. Motel 6 is a traveler's bargain. Convenient, ubiquitous, dependable, and inexpensive. Picking up the year's Motel 6 guidebook (conveniently shaped to fit in a car glove box) is a ritual to me, akin to purchasing a decent roadmap prior to summer driving season and fretting about the rising cost of gasoline.

Any readers who know me may recognize something odd about me rhapsodizing about Motel 6. My preference is to patronize mom and pop motels that reside on small two-lane roads, ideally quirky places that sport glowing neon signs. I like the kinds of places that most folks would never see, places with friendly owner/managers who like to chat as they hand you a key. Recent movies like Vacancy and classic horror flicks like Psycho have blotted their reputations, but these sorts of motels can still be found. With Jenny, I have run a little mom and pop website, Motel Americana, to celebrate motels as a fading part of the American roadside.

But for my money (and I don't like to spend a lot of it), Motel 6 is a good fallback when my travels take me to places lacking in the mom and pop spirit. And I'll admit it: sometimes when we're driving at some ungodly hour, it's nice to pull out the Motel 6 guidebook, dial up their 800 number, and reserve a room. Almost always, their prices are better than surrounding hotels, and they certainly compete with flea-bag motels that are sometimes too quirky even for my open-minded tastes.

No one will confuse Motel 6 with fine lodging. The walls are paper thin, the televisions are microscopic (they used to be coin-operated). And I've been known to place towels in the tiny shower stalls to silence an annoying late-night drip. But you get what you pay for at Motel 6. And that can't be said about all motor lodges.

The first Motel 6 opened in 1962 in Santa Barbara, California, selling its rooms for -- you guessed it -- six bucks. Today you'll spend somewhere between 29 and 49 bucks at most locations, more on weekends or at tourist hotspots. The rooms are utilitarian and bland, excepting those jaunty bedspreads I've noticed in recent years. The rooms are designed for easy cleaning and minimal upkeep. The motels are dependable in their banality, honest in their simplicity.

So when my daughter Vienna passed through her Michael Jackson phase, we stayed at the Santa Maria Motel 6 when attending the trial several times. Now that she's college shopping, we look for college-adjascent Motel 6s to leave room in our budget for souvenirs or the occasional brownie fudge sundae. And when we head out for this summer's road trip, The 2007 Wood Family Southern Routes BBQ Tour, we'll keep an eye out for Motel 6s along the way. While we prefer independently owned places with glowing signs and linen postcards, we're always happy to settle for the motel chain co-founded by William Becker. So thank you, sir. Wherever you're going, I'm sure they left the light on.

New York Times: obituary (Free Registration)
Email ThisBlogThis!Share to TwitterShare to FacebookShare to Pinterest
Posted by highway163 at 7:58 AM