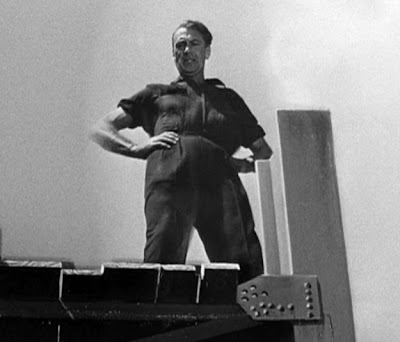 One of my favorite movie endings comes from a genuine guilty pleasure: King Vidor's (1949) The Fountainhead. Written and adapted for the screen by Ayn Rand, the movie advanced her objectivist principle of hero worship, illustrated by an architect who would not yield to the standards of others. Naturally, the book is much more developed in its explication of Rand's philosophy and its depiction of her characters, but I still enjoy the film version more. I love this movie for its excesses: its bombastic music, its heavy-handed imagery, its wooden dialogue, and its utter lack of humor. Every scene in shouts "greatness!" even as the experience descends into camp. Like Dominique Francon, I love this movie "without dignity, without regret."

I use one scene from The Fountainhead in a course I teach, Visual Communication (COMM 171). It occurs early in the film when Howard Roark is offered a much needed commission, so long as he allows a modernist masterpiece he designed to be mutilated by a committee's vision of popular taste. There's a moment when he seems to consider the opportunity that is offered him, a chance to escape his debts and gain the acclaim he deserves. But Roark turns the committee down, announcing that he'd rather work as a day laborer than prostitute his talents for corporate parasites. When he does indeed go to work at a stone quarry, he meets Dominique, a woman who is nearly his moral counterpart. They fall in love, quickly recognizing their mutual idealism. Yet they must endure years of hardship and struggle before earning the right to each other.

I'll leave that drama to your own perusal and jump right to the film's best part. Dominique has proven herself to be Roark's equal at last. Only at the film's conclusion is she worthy to ascend to his lofty heights. Recalling that The Fountainhead is incapable of rendering an idea with any subtlety, she affirms their mutual triumph by literally rising to meet Roark in the clouds, taking an elevator to where he stands at the top of his new building (the world's largest, naturally). Out of respect for Ayn Rand, who would view any attempt of mine to summarize that scene as the act of a "second-hander," I will let the "architect" of The Fountainhead speak for herself:

"She rose above the broad panes of shop windows. The channels of streets grew deeper, sinking. She rose above the marquees of movie theaters, black mats held by spirals of color. Office windows streamed past her, long belts of glass running down . . . The city spread out, marching in angular rows to the rivers . . . There was nothing behind her now but steel ligaments and space . . . and the figure of Howard Roark."

Yes the visual effects necessary to place Gary Cooper on top of the tallest skyscraper in New York City look pretty silly by today's standards. But I still love the confidence, the audacity, the brute arrogance of that last scene. It's definitely worth a rental on a rainy Sunday afternoon.

Email ThisBlogThis!Share to TwitterShare to FacebookShare to Pinterest
Posted by highway163 at 4:58 PM