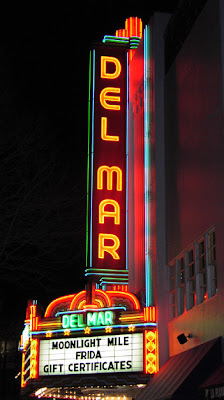 The Del Mar Theatre is a Santa Cruz treasure. Opened in 1936, the Del Mar represented one of the best examples of art deco design on the California central coast. Outside, a soaring marquee glowed with blinking letters and alternating colors. Inside, a mammoth auditorium (with a balcony!) was bordered by two towering bas-relief water carriers. Folks wanting a smoke could amble upstairs to a fashionable mezzanine level, peering over the concession stand.

The Del Mar struggled in recent years until being closed in 1999. Like so many popcorn palaces, it appeared that yet another art deco masterpiece had been beaten by the multiplexes. But local preservation groups rallied to save their hometown theatre, restoring the Del Mar to its former grandeur in 2002.

Today the Del Mar offers art-house flicks and swell midnight movies for the college crowd, all just a few blocks away from a multiplex showing mainstream movies. Next door is a terrific pizza place (Pizza My Heart) open late enough to grab a slice while waiting for the midnight show. With its glowing neon, quirky selection of films, and downtown location, the Del Mar is a dream.

By the way, this post does double-duty: celebrating the Del Mar and providing a follow-up for previous entries about Bourbon Street Neon and San Jose Neon. The Del Mar photo comes from my small collection entitled Santa Cruz Neon.

Friends of the Del Mar