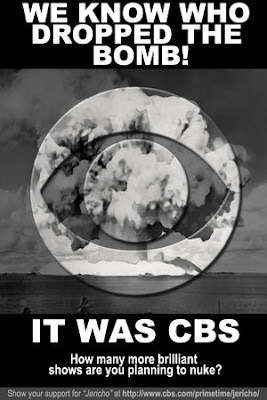 As expected CBS dumped Jericho. Aside from 60 Minutes, Jericho was the only show I watched on that network. I've already shared my love for that show in a previous entry; there's no need to reiterate that Jericho is a gem amidst so much garbage on network television. Now the question is this: how do you save a cancelled show?

Over at Ain't it Cool News, Merrick recommends that viewers send letters to pertinent folks at CBS - letters, rather than emails or online petition entries. Letters - with stamps and everything. Given that we're talking about a show that depicts a Kansas town struggling to rebuild in the aftermath of a nuclear attack on the United States, without most of the electronic communications so essential to our everyday lives, sending an old fashioned letter to CBS seems more than appropriate.

Here's the body of the letter I sent them. It seeks to be short and courteous. It provides a little demographic information (note the reference to 60 Minutes), and it focuses on programming logic rather than fan emotion. Other folks will try different approaches, but this style works for me.

Jericho is the only show on CBS I watch these days (aside from good old 60 Minutes), and I am disappointed that your network has cancelled it. While its ratings were unspectacular, I believe much of the problem can be attributed to the show’s placement in a brutal time slot, not to mention its lengthy hiatus over winter. I am confident that the show would have done much better had it been better handled by your network.

Advertise the show as “back by viewer demand,” locate a timeslot where it can serve as counter-programming to less family-oriented fare, and give it another year.

If you do, I commit to actually watching the commercials that run during the episodes, and I’ll consider trying other CBS programming as well.

AICN has a pretty good hub of Jericho activities, and I plan to check back with them to see about other fan efforts to rescue an under-appreciated show.
Email ThisBlogThis!Share to TwitterShare to FacebookShare to Pinterest
Posted by highway163 at 9:49 AM

Jericho must go on! losing jericho on air, is like losing my day job. let us help each other by signing the petition at
http://www.youchoose.net/pledge/save_jericho/from/xavierr

I agree and if you don't mind, I'm going to link your blog with some writings I have on Jericho in my main on (Xtra Cab Archives).

It was maddening they canceled it and the fact they put it in the worst time slot just shows they wanted it to fail. That, and too many people are brain dead and enjoying junk tv instead of quality written dramas. If I see one more dancing with the american idol gladiator bull#### I'm going to puke. Sorry, just ranting...